Our Sheffield Vice Chancellor needs to justify his huge salary

He earns nearly three times as much as Theresa May

Burnett, the vice chancellor of the University of Sheffield who pays himself over £420,000 per year, has today attempted to position himself on the side of the students, yet we in Sheffield know that it couldn't be further from the truth.

Keith, who also spent £50,000 of expenses on flights and hotels in just one academic year, wrote an article in The Guardian criticising the government for creating competition between universities, and making the future of higher education unsustainable.

To the naked eye, he comes across as almost likeable. You start to believe he actually believes passionately in socialist values and good teaching. And then you ask yourself why he's writing this today, and why he's saying this now.

The real reason our Keith is writing this article is because today ministers criticised his huge pay cheque, meaning that chancellors who earn over £150,000 per year must now justify that pay.

But how can Keith justify his salary? He's a man who earns enough money per year to buy 85,000 tickets to Pop Tarts, and three years ago, Sheffield students were so pissed off at his vast salary, they made a fake Facebook account for him which is still active. 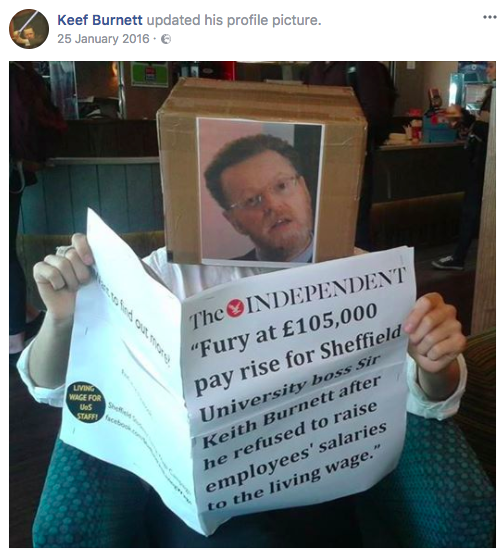 Louise Richardson, the Vice Chancellor of the University of Oxford, who earns £350,000, plus is able to live rent-free in a £3.5 million house, also hit out at critics yesterday for chastising her salary.

But we, as students who are funding these huge salaries need to speak up about how our tuition fees are being spent. Richardson's and Burnett's combined annual salary is enough money to send 30 students to university for three years. Those 30 students would reap the benefits of a university degree for the rest of their lives, so wouldn't it be better to spread that money in a fairer way?

However, Burnett would rather blame the government for a failing university system in which smaller universities are on the brink of collapse and tuition fees could potentially bankrupt a whole generation of people in the future. He struggles to be able to look to himself to see the pitfalls in the university system.

Burnett needs to justify his salary, and more importantly, pay more attention to the students he's supposed to be working for.