Which meme is your Liverpool fresher hall?

Just in case you were wondering, which you obviously were

Arriving at Liverpool, you have several options in terms of halls. Are you going to slum it in Carnatic, but ultimately have the better time? Or, are you more happy to settle for less fun people whilst living a life of luxury in Crown Place? Well to explain all of the differing options, we’ve decided to explain them through the only method us millennials can understand – memes.

Memes have become the defining method of communication for our generation. Want to throw Grace some shade leaving the your student kitchen in a mess but don’t want to cause drama? Tag her in a relevant meme. Want to tell Rob he’s a bit of a dick for missing Dan’s birthday night out just because his girlfriend wasn’t invited? Tag him in a relevant meme. But we believe these memes can be used for more than just “haha omg girls how much is this me!?”

It’s a typical Sunday evening in Melville Grove, Claudia from Buckinghamshire has removed a freshly baked spinach and ricotta filo pastry pie from the oven, whilst Sophia browses IKEA online for some new pillows for their beloved lounge space. If Melville was a meme, it would undoubtedly be Salt Bae. The thought of dodgy Carnatic meals makes you uncomfortable. You instead prefer to make full advantage of your spacious kitchens by preparing culinary delights, usually finished off with some sort of parmesan or fresh herb, sprinkled on in the style of Salt Bae. 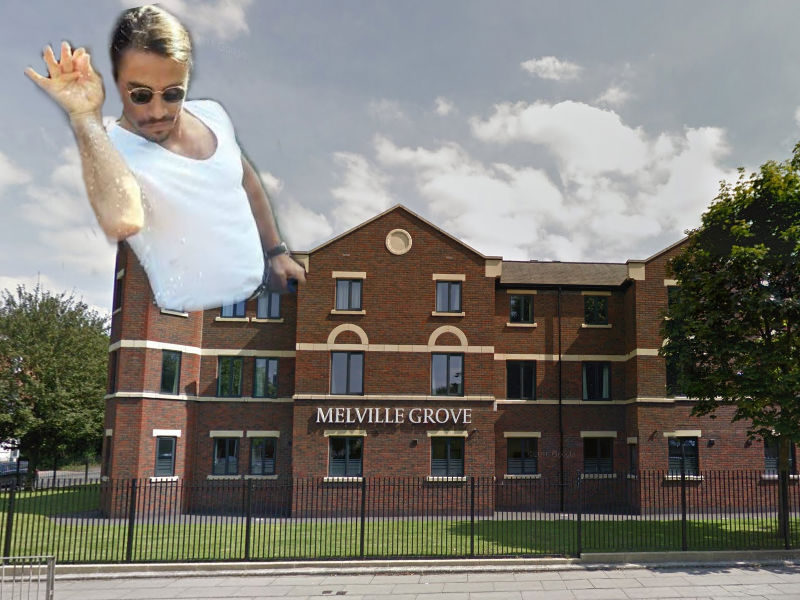 If Carnatic is the gift Bill Clinton could have given you, Greenbank is Ivanka Trump’s. Your reaction when you got in to Greenbank was a lot like that of Michelle Obama’s when she was handed that huge Tiffany’s box. You’re grateful, of course, but you’re also somewhat concerned and confused. It wasn’t one of your preferences, and if it was it the last one. It’s lacking the prestige of Vine and Crown and the ironic loveable-ness of Carnatic.

People may tell you that Vine is shit for social life, but Evil Kermit says it doesn’t matter what they think. Whilst post grads who are into their PhD’s don’t always make the most lively of housemates, you secretly like having this little private haven space to call your own. Something tells you that you’re missing out on the true fresher’s experience, but inner you doesn’t give a fuck. You’re more than prepared to save yourself for next year for when you’re in an 8 bed on Langdale and live a bit of luxury in first year. 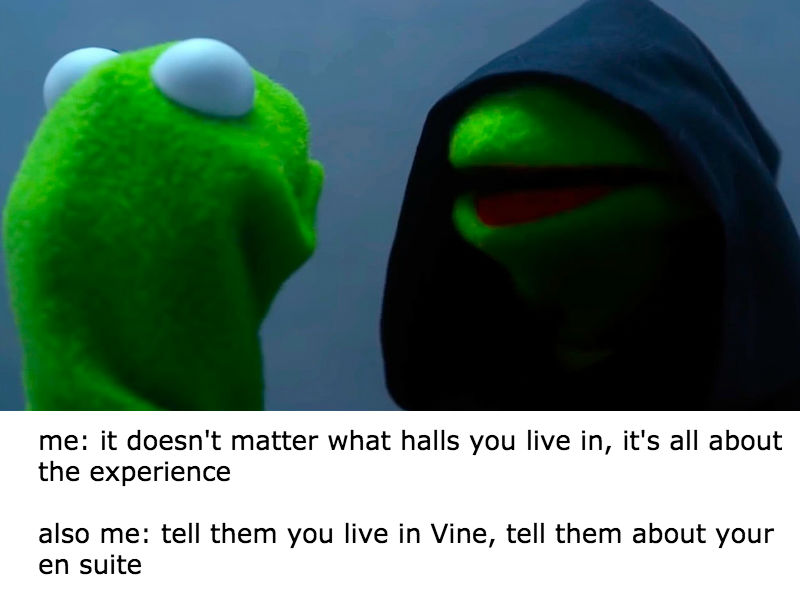 You can hear Vine when they brag about their catered halls and en suite, you listen patiently, but deep down you know you got the better deal. You’re right by the Guild, slap bang in the middle of campus and realistically everyone wishes they were you. Carni are jealous but insist they have it better off. You’re not even rude about it, you’re the kings and queens of campus and you’re letting everyone else do their thing. Oh yeah, you’re also all really fit. You could probably have been this guy if you weren’t so modest.

If Carnatic is the vast and varied world of the internet, Lady Mountford is a small unknown corner a.k.a. the remakes of Bee Movie. Much like telling someone you live at Lady Mountford, asking someone if they’ve seen this bizzare (yet brilliant) part of the internet is likely to be met with a face of pure bewilderment. The Bee Movie belongs to those with a very particular sense of humour, and Lady Mountford belongs to those who are too outside of the mainstream of Rankin and Sailsbury. 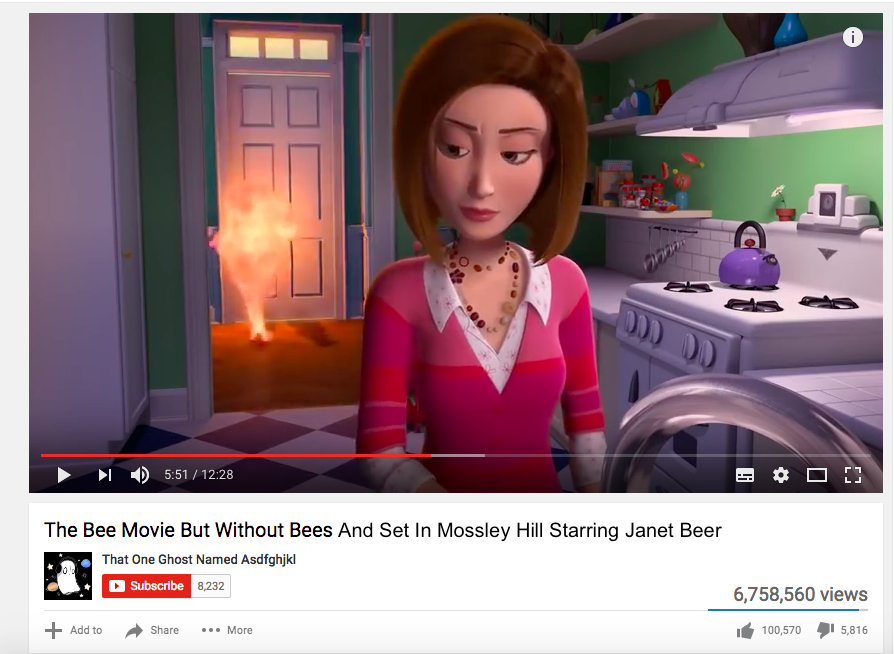 Watching the others have fun from the confines of your single bed, you swear you’re happy you ended up there but you’re constantly hurt at the lack of socialising with the other blocks. You roll another joint and deal with your intense complex over being so far away. The next day a guy you vaguely know your seminar asks if you want to come have pres in Rankin that night. “Pfft” you think. “Rankin? I doubt it.” Repeat.

Your typical Rankin Hall resident is rowdy as hell. They’re probably going to be a Social Sec of some kind next year and it’s only fair to the rest of humanity that they’re contained in the same space. You are on the 699 to a massive Level Wednesday and your chanting and renditions of Oasis’ Wonderwall are kind of funny at first. However, at this point we’re about pull an overnighter at the Sydney Jones and much like this meme, we’re a bit over you.

For a while, it was really cute, we all fancied him even though he was actually really young, we all watched him on Ellen. Within about two weeks it was boring and we were over it. He was a one video wonder, and much like those who live in McNair a little bit basic when it comes down to it. He rocked his Stussy and Vans but there wasn’t much else going on.

Salisbury Hall: Listens to —- once

“Oh mummy it truly is awful! I think I must come back home! We should have gone for Vine Court!” you cry down the phone during first night’s residence at Sailsbury Hall. However, this soon changes as you’re introduced to your first bomb of Mandy at an event at Invisible Wind Factory. Suddenly you’re transformed. You’re really into Techno, you’ve bought 3 Vintage adidas jackets from Ressurection and Skiddle is your most used app. The rest of the private school lads barely recognise you on your return to Hertfordshire for Christmas.

Remember Dale Hall? It was closed in December 2014 when the current third years were baby freshers. It didn’t have showers, only baths and was altogether a bit gross. Everybody who lived there loved it and it is held fondly in the memories of Carnatic freshers of yesteryear. Also it was hit by fire last summer. So it works on that level too. 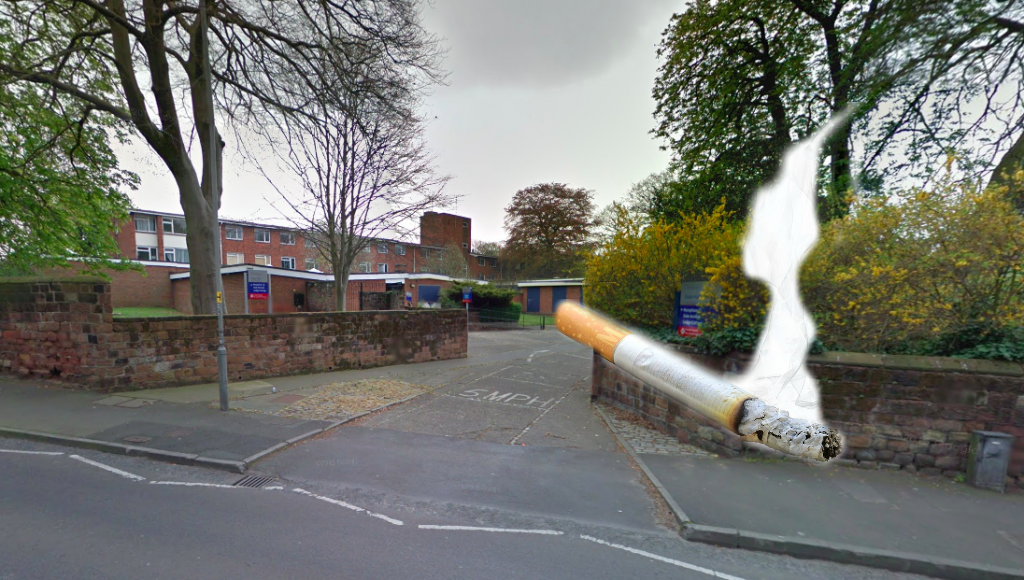 We’re as confused as you are about the fact you live in Philharmonic. There’s honestly nothing to say, apart from the fact that the existence of this place is essentially a myth. 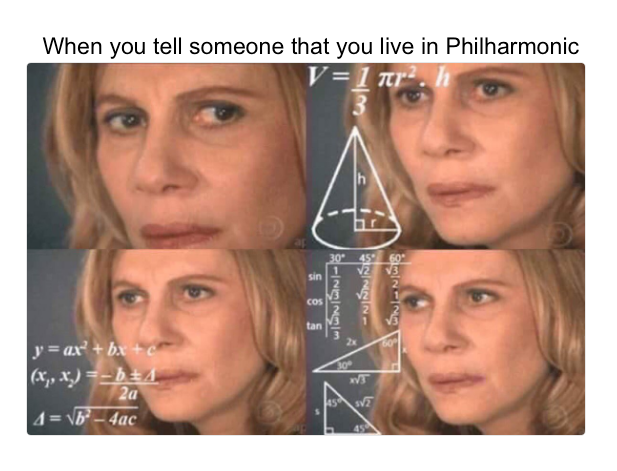 Grand Central: Me, an intellectual

You thought living in Grand Central was a really good idea – it had everything living on campus had but closer to town and Lime Street. What you didn’t bank on however was having to hang around with JMU students for the whole year. At the start you feel a bit above them; as if your Russell Group – first red brick, never forget – education puts you above your new BFFs. Realistically, it does not but let’s face it people are going to give you funny looks every time you explain your living situation. 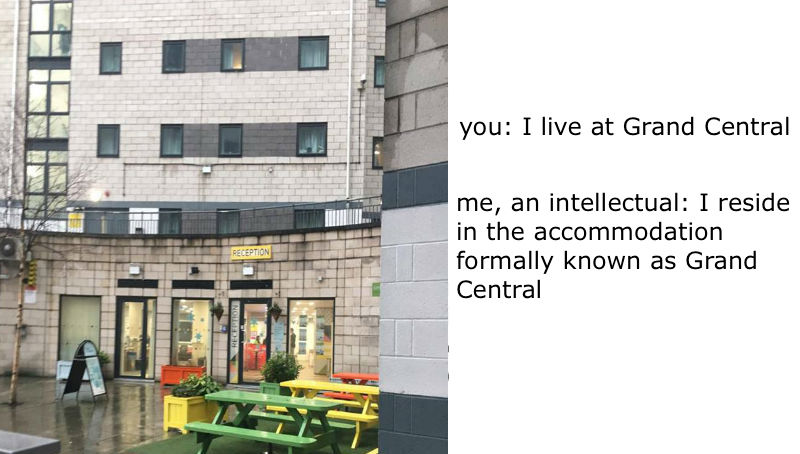 As you sit in your semi in New Brighton getting an early night ahead of the 8am train you have to catch in order to make your 9am lecture on Women in Ireland, you begin to wonder what your coursemates are up to. Are they pulling in Level? What did they have for their dinner in Carnatic tonight? Are they having fun? Are they making long term friendships they’ll treasure well in to their adult lives? Who knows. You turn off your TV because your mum is shouting at you – “It’s gone midnight Leah you need to get to sleep.” A single tear rolls down your face. This wouldn’t have happened in Lady Mountford.