And who wouldn’t be?

King’s awarded the Sultan of Brunei, Hassanal Bolkiah, the man who signed off on these laws, with an honorary degree in 2011. When The Tab first contacted King’s to find out if his honorary degree would be revoked they replied that his degree was received ‘for his lifelong commitment to higher education’. Ed Byrne has since said that he has ‘urgent concern’ over the matter.

But the people of Brunei deserve a little more than King’s ‘concern’. They deserve our disgust, our outrage and the idea that my institution is reluctant to give them it makes me thoroughly embarrassed to be associated with King's.

And I’m clearly not the only student who is. At time of writing, 4,832 have signed a change.org petition to revoke the degree from the Sultan of Brunei and for King's to take a stand for the human rights it claims to advocate for.

As of April third, citizens of Brunei were subject to inhumane new laws, by which gay sex and adultery are punished by stoning, and thieves have their hands amputated if their crimes are witnessed by a group of Muslims. 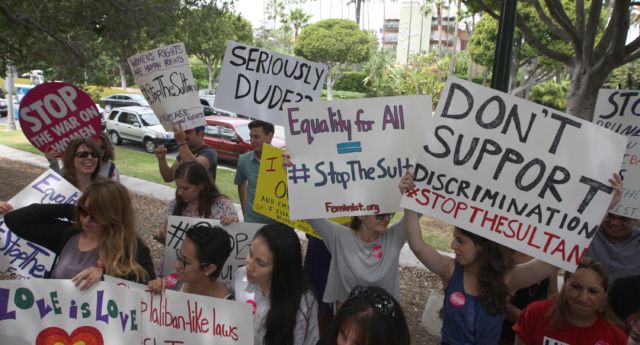 How can a university which claims it ‘supports and promotes diversity and inclusion in all areas of its business’ uphold a man who actively tries to eradicate the idea of it in the country he controls? Does King’s Fellowship and Honorary Degrees committee not feel any shame when they imply that some lives are simply not worth angering a world leader over?

King’s can repeat that they are ‘taking the comments and concerns […] very seriously’ but their ‘urgent concerns’ for the people of Brunei are put to shame by the University of Aberdeen who quickly revoked the Sultan’s degree following the passing of Sharia Law. If Aberdeen can pull its socks up and put human rights and care for its students first, why isn’t King’s following suit?

I don’t believe that without pressure from students and staff that King’s would have acknowledge that there was an issue and would have quietly let it slide under the radar of the media.

If King’s going to brag about their inclusivity, their diversity and their mission to uphold both, then to ignore students, staff and the 4,832 individuals who signed the petition is a slap in the face for university equality. Their lack of action screams to associates of King’s that, really, if status or reputation are at risk, they’re willing to look the other way.