Meghan Markle will appear on in a "unique" panel discussion on Friday 8th March at King's College London.

The Duchess of Sussex will join Adwoa Aboah and Annie Lennox, founders of organisations for female empowerment Gurls Talk and The Circle respectively.

The announcement was made on the Kensington Palace Twitter page earlier today and said the panel will discuss a "range of issues affecting women today." 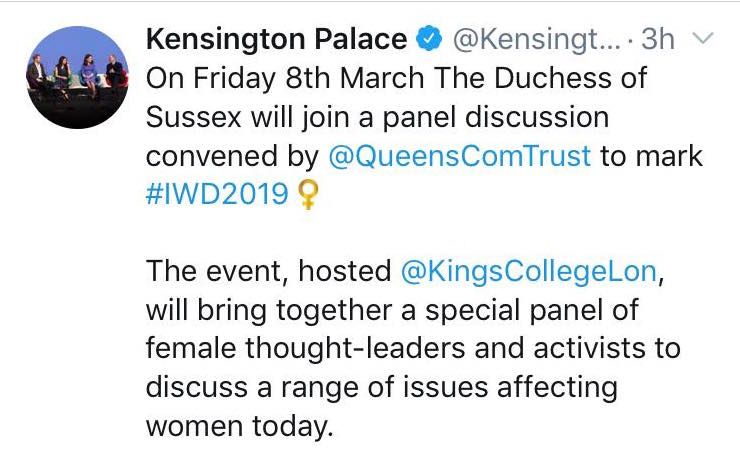 King’s will also be hosting Julia Jillard, Chair of the Global Institute for Women’s Leadership, Christen Jarrett, founder of Let Us Learn and Angeline Murimirwa, executive director of CAMFED (Campaign for Female Education).

The panel, hosted by The Queen’s Commonwealth Trust, will discuss the importance of International Women’s Day in offering a possibility to talk about limitations to female empowerment and "the positive opportunities that come when women are given wider access and equal opportunity, whether that be in the UK or elsewhere in the world”. 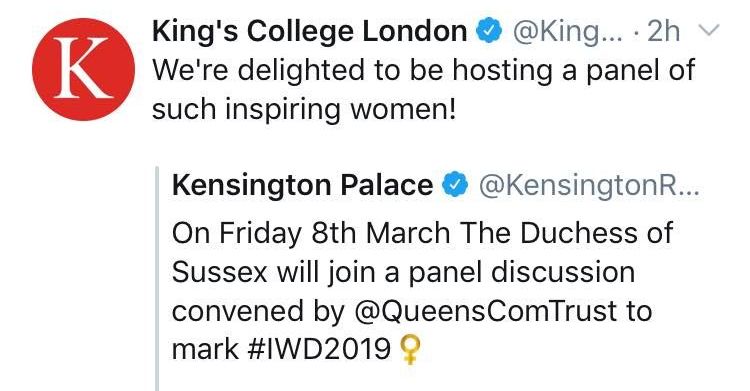 King's getting giddy about The Duchess's visit on Twitter

This event comes after Meghan paid the most covert visit to King's ever as a guest of the ACU (Association of Commonwealth Universities) who meet every year to discuss how to combat social and political issues through education at university campuses.

Will they treat Meghan to a nice room or will they force her to make her way down into the darkness of Strand’s underground? That’s a mystery.

Now we just need to figure out how to attend.