A male student sent a series of racist messages to a black female student who he matched with on Tinder.

Talking about the pictures of her, Declan Hiam asked if she was dressed up as King Kong, Harambe or Donkey Kong, after they matched on the app last night.

Nnenna Asubo, a second year Law student at UCL, posted screenshots of their Tinder conversation today, saying "further proof that racism is alive and well in 2018".

further proof that racism is alive and well in 2018 pic.twitter.com/NYg36SKsk1

Declan, a King's College London Engineering student from Worcestershire, opened the conversation by telling Nnenna that "the cops are coming," before asking her "what are you dressed as? King Kong? Harambe? Donkey Kong?"

When an understandably shocked Nnenna responded with "excuse me?" Declan claimed "it's a dare," before adding "please don't lynch me."

Speaking to The Tab, Declan, 21, said he sent these messages as a part of a game with his friends in which they would experiment with the matches who liked them but would usually otherwise reject. One of these challenges was to get someone to unmatch you as quickly as possible. Declan admits he sent these messages himself, as part of this challenge.

Here are the full screenshots of the Tinder conversation: 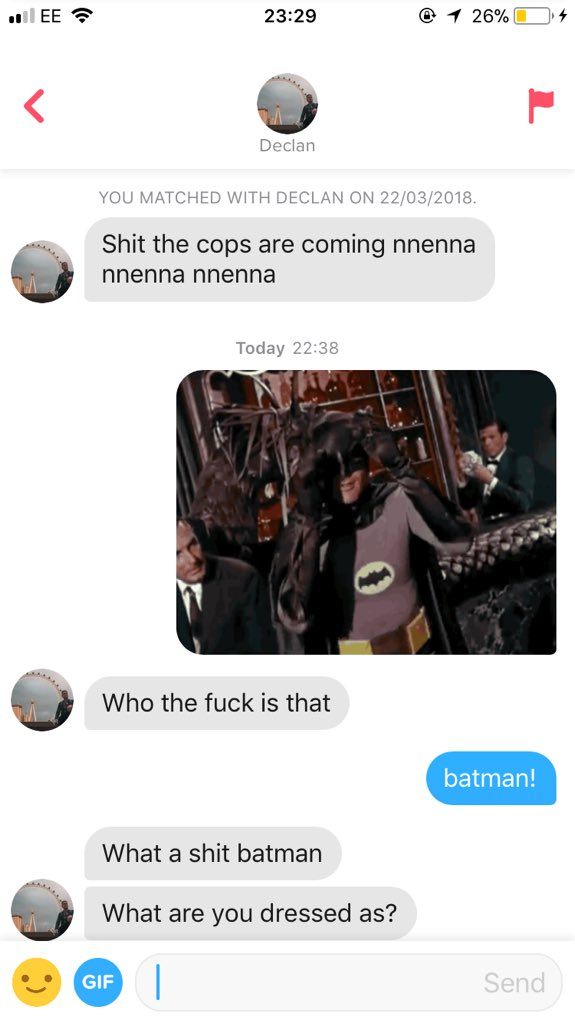 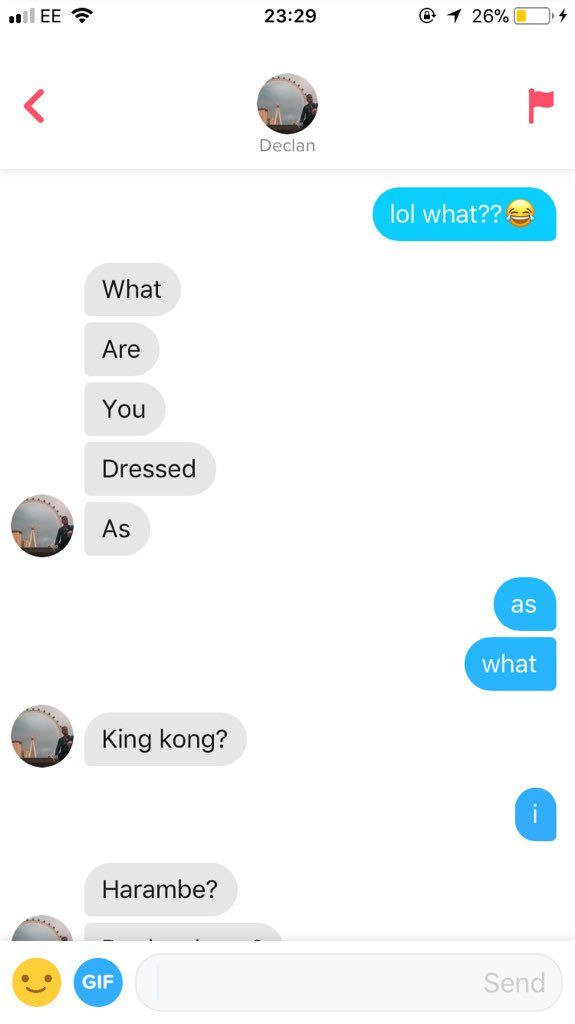 Despite sending each of these messages himself, he said: "The intent wasn’t racially driven. I felt horrible sending every one of those messages. I explained immediately after that it was a dare. And apologised to them directly."

Speaking about the awful messages she was sent, Nnenna told The Tab: "I was in shock to begin with simply because after all the other incidents happening at other unis I couldn’t believe that he would be stupid enough to use racial slurs that could potentially land him in trouble.

"After the 'King Kong' comment, which he followed with 'Harambe' and 'Donkey Kong' it was just really apparent that the didn’t find anything wrong with what he was saying.

"The screenshots were the only conversation I had with him until he created a Twitter account to reply to my tweets." 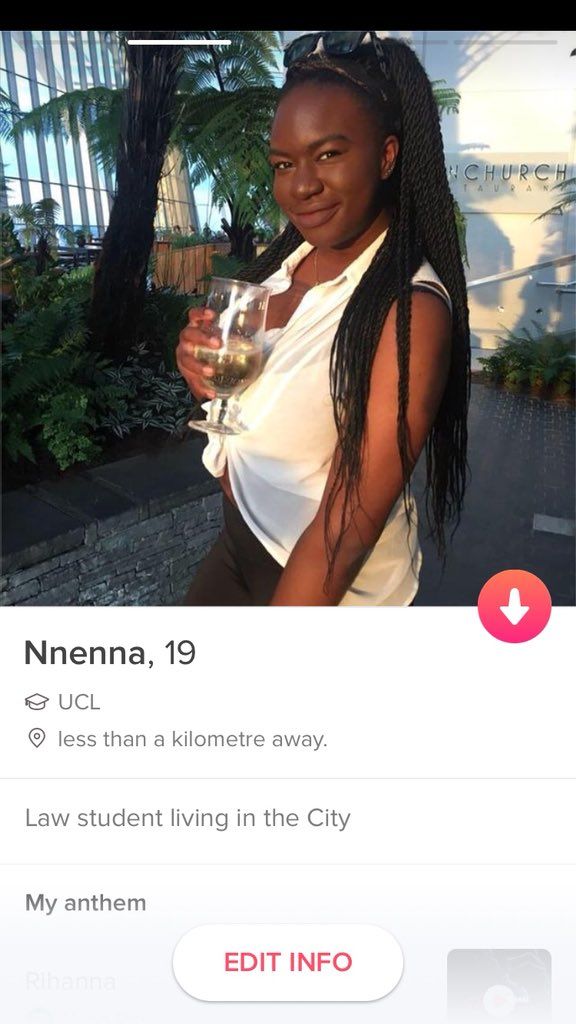 A screenshot of Nnenna's Tinder profile 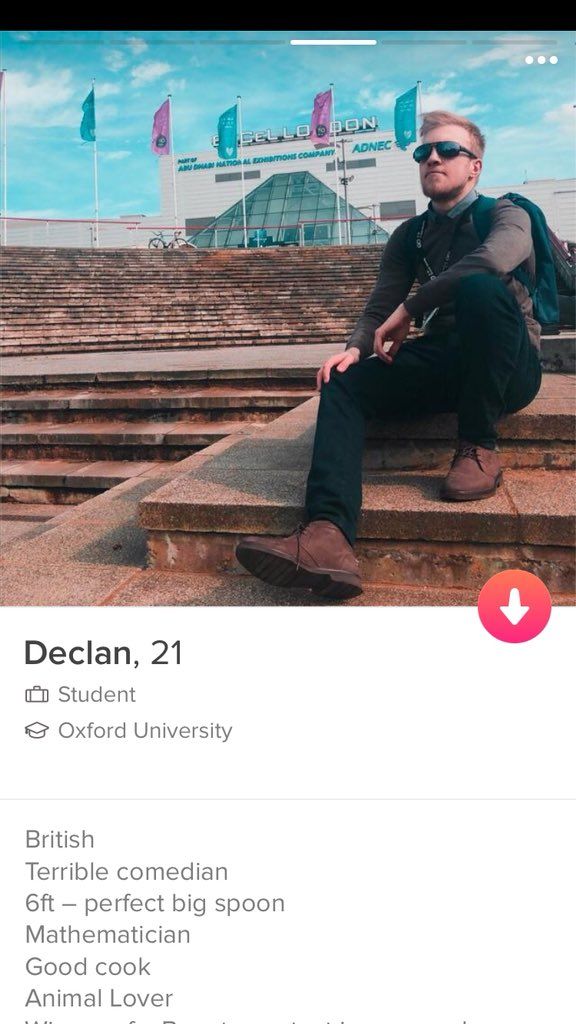 Nnenna has found Declan's social media pages, including his Instagram and Facebook, and has tweeted images of both. He said he studies Electronic and Information Engineering at King's College London on his Instagram profile.

He has since made these accounts private.

@KingsCollegeLon nice to know the calibre of your students remains high pic.twitter.com/GFLan17KQT

Speaking to us about his actions, he added: "Honestly, there is no reply I can give to you that is gonna change anyone’s opinion on me after reading this article.

"No one sympathises with racists and no one will care about the context either. Your readers will think I’m some horrible pro-right extremist and the true answer is, they couldn’t be the furthest from the truth.

When we published the article, Declan said: "I want you to change the picture of me. I don't care if you publish the article, I would prefer if you used something more flattering."

This comes just days after five students at the University of Exeter were suspended for sending racist messages down a group chat.

A King’s College London spokesperson said: "We have been made aware of some accusations of racism, mentioned on social media and relating to a student’s personal social media account, and are looking into this matter."

Get breaking King's news straight to your WhatsApp by clicking here.