Two members of the Bracton Law Society have revealed the deluge of racist messages sent on a group chat used to arrange football matches, in a Facebook post earlier this evening.

The five men in question have now all been suspended from the university, pending a 'major investigation' and one member of the group, Matthew Bell, has had his place on a grad scheme at Hill Dickinson LLP revoked.

The students posted screenshots of the messages they had received in the 'Dodgy Blokes Soc' group chat in order to expose the widespread use of racial slurs and derogatory terms used by two committee members. 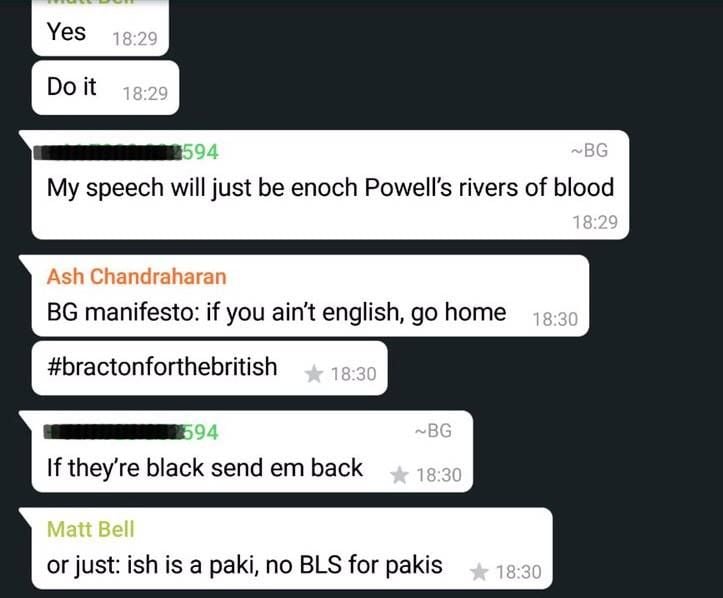 An example of the racist language used in the chat

This revelation comes just days before the BLS elections are expected to be held, with several of those accused currently holding positions within the society, and running for other positions. The election is due to take place on Wednesday.

Bracton Law Society sent an email out to its members stating that: "The views expressed by the individuals involved do not in any way whatsoever represent the Society or its ethos. Bracton Law Society does not condone the nor tolerate such behaviour and will respond in line with the University of Exeter and The Students’ Guild policy"

Matthew Bell, General Secretary of BLS and future trainee solicitor at Hill Dickinson LLP, is alleged to have made several racist comments and rape jokes, including slurs like "n****r" and "p**i."

Ash Chandraharan, current BLS football co-captain and running for BLS General Secretary, writes how he will "lead the charge against his own color."

Alex Crawford, Pro-Bono officer of BLS, Brand Ambassador for RPC at Exeter University, appears to joke about how "you only need to go as far as Mauritania to get slaves."

James Cranstone, second year Law student, tells the rest of the group, "guess who got a placement nigga sluts."

Bailey Grant, first year Law student, tells the rest of the group, "this is why we need a race war. Sorry Ash, sacrifices have to be made, nothing personal."

The Tab has now exclusively named and pictured these five men.

Here are the screenshots from the group chat. The names have been used, and the number crossed out belongs to Bailey Grant. 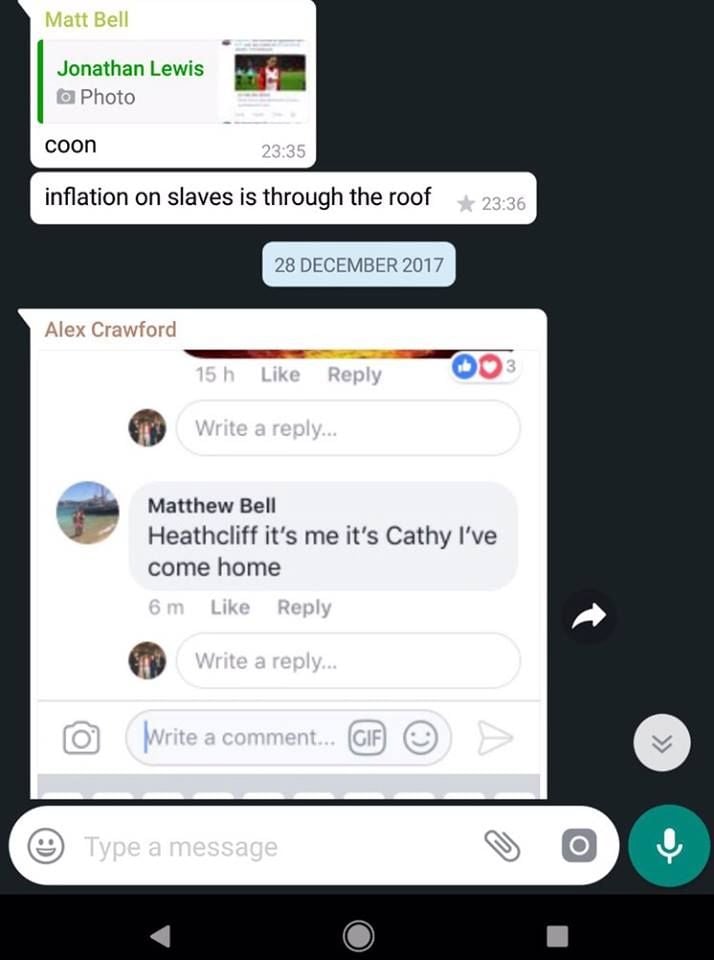 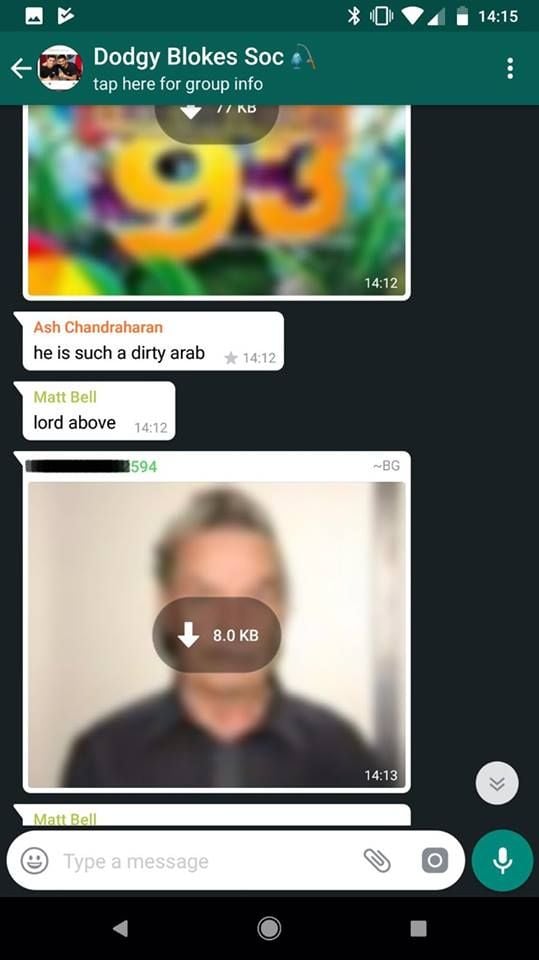 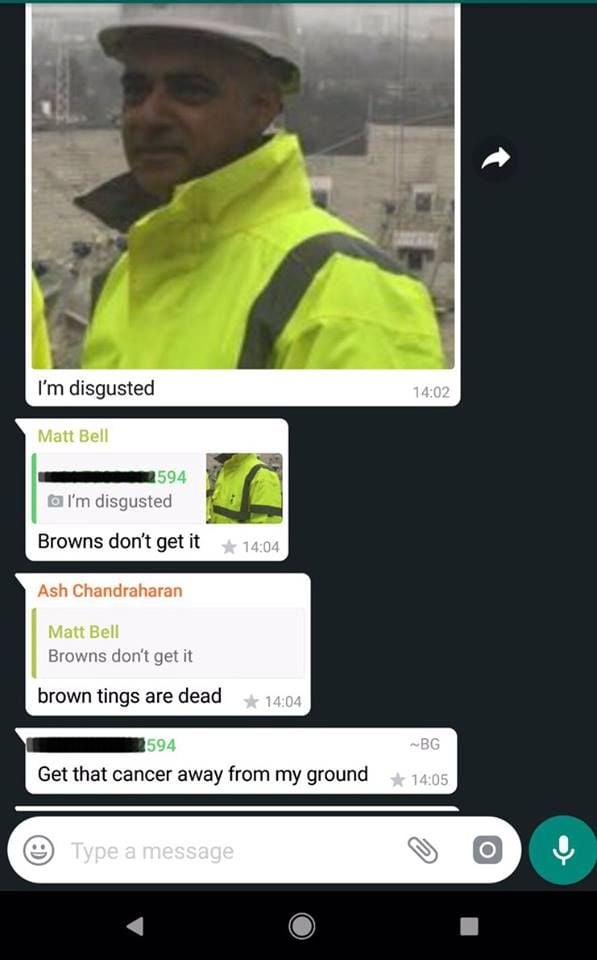 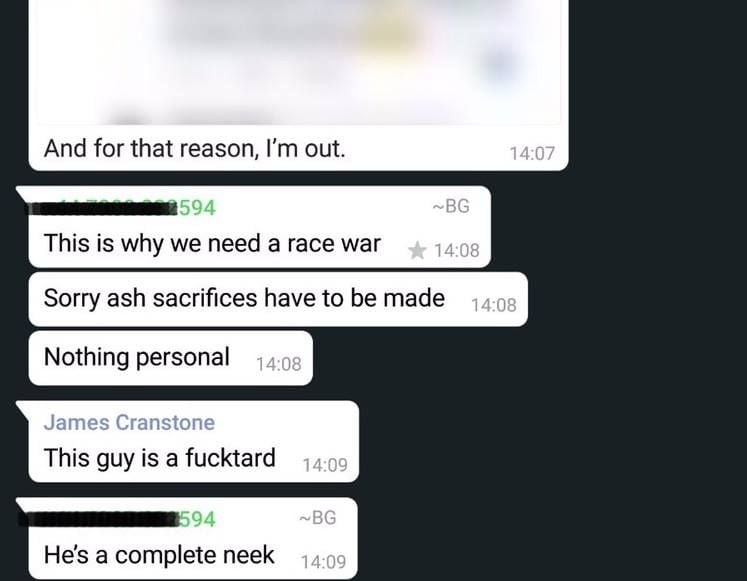 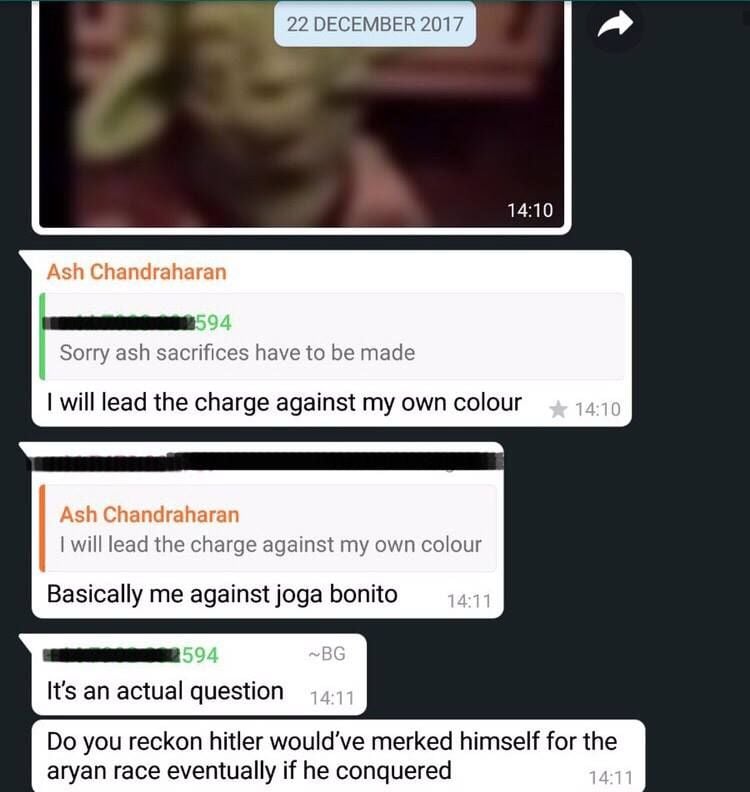 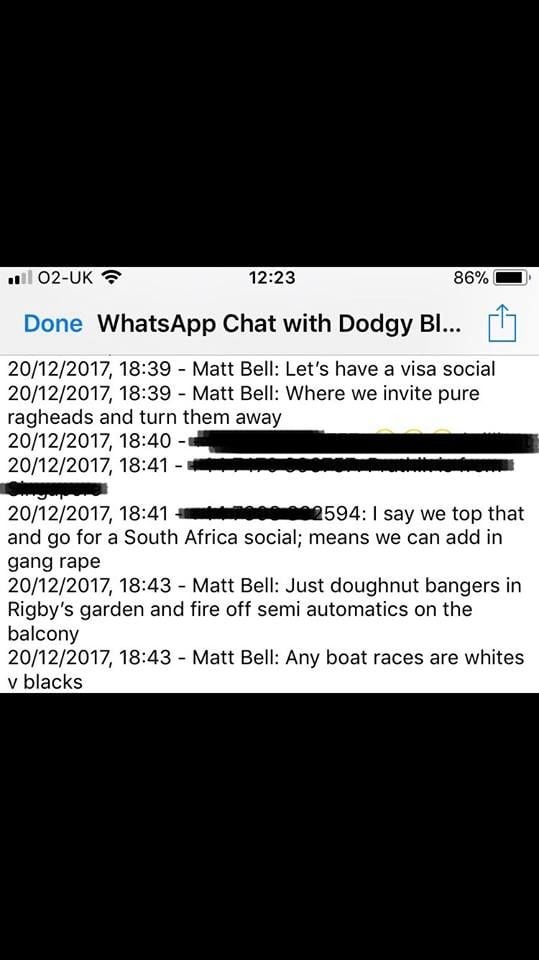 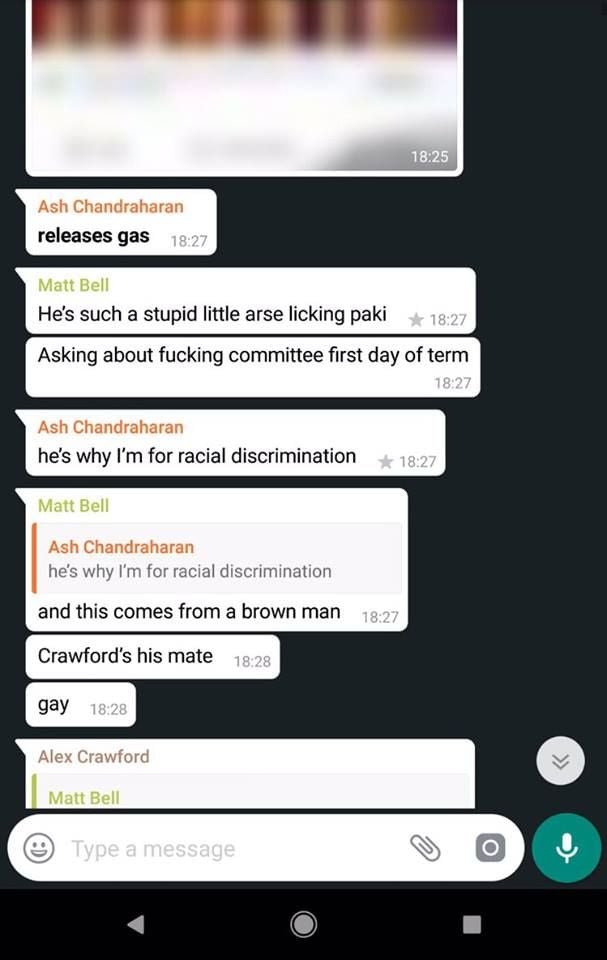 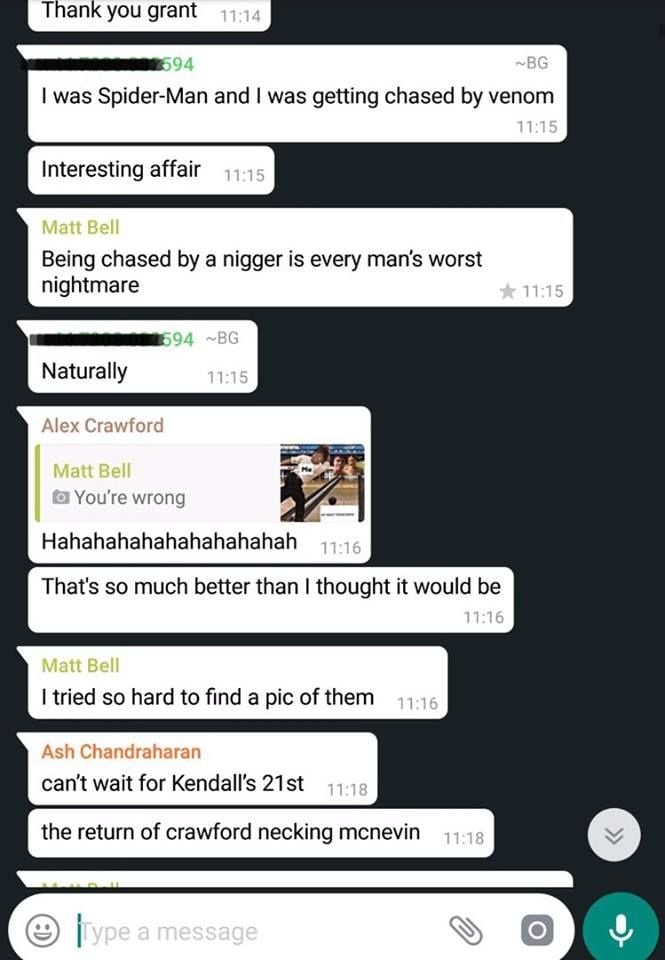 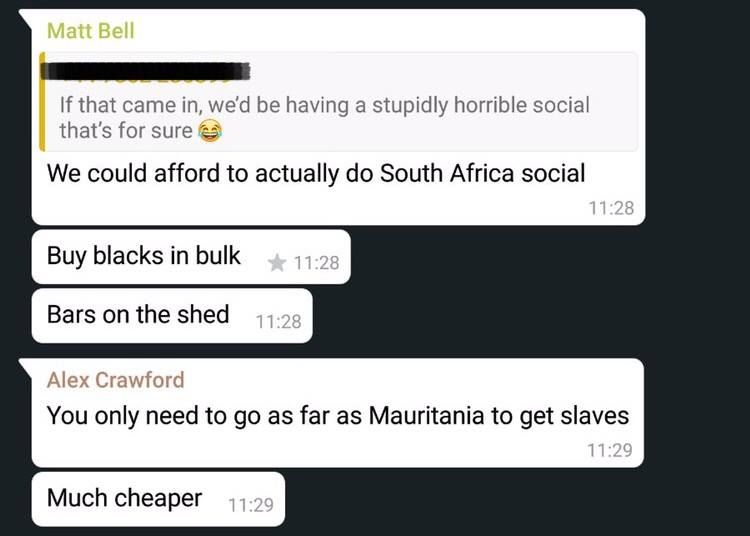 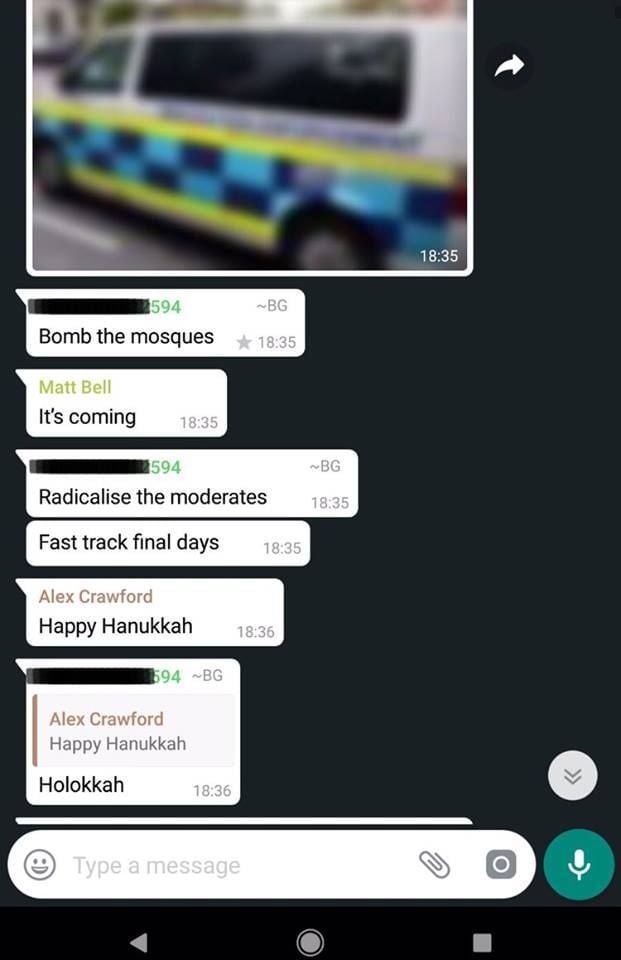 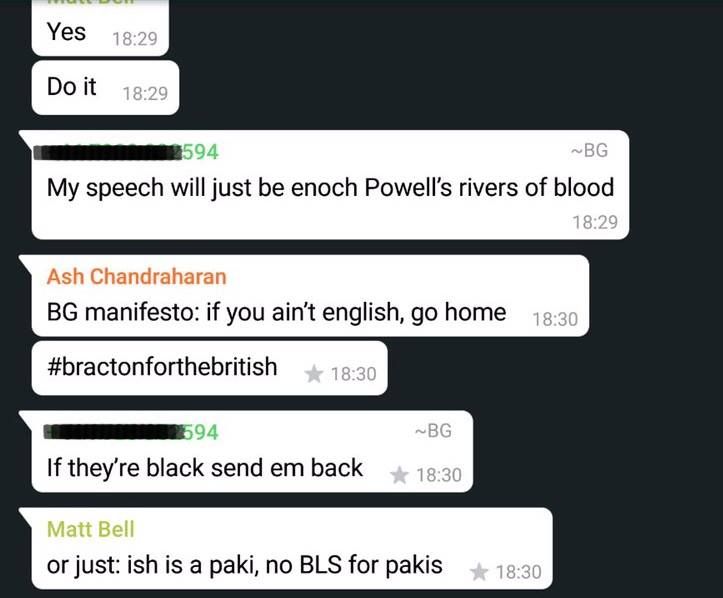 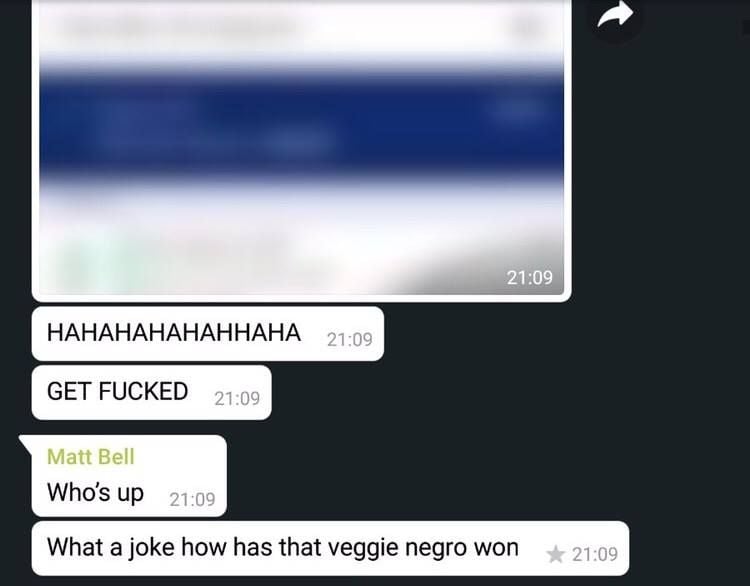 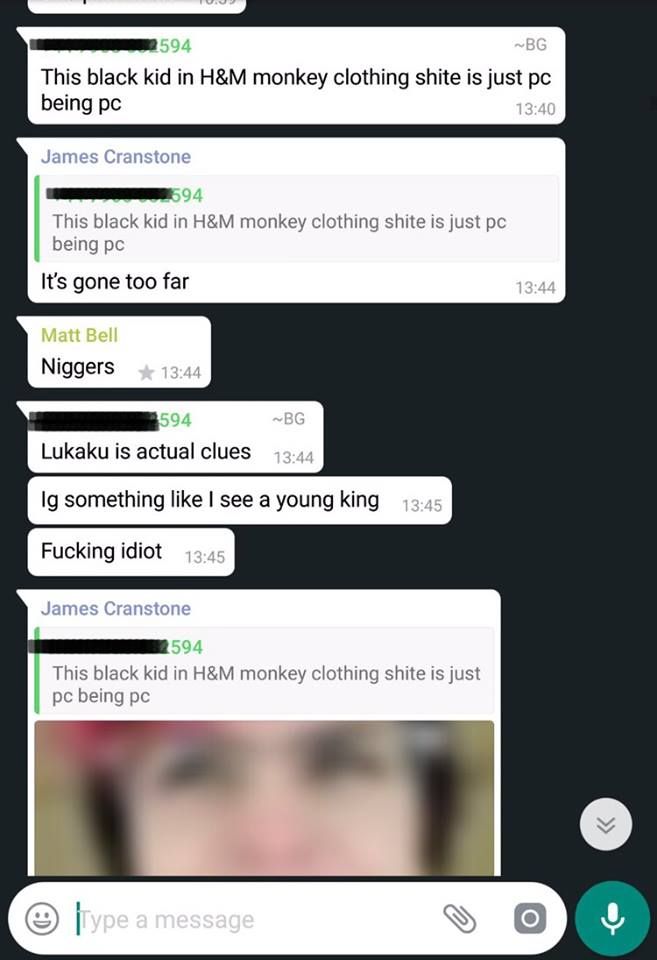 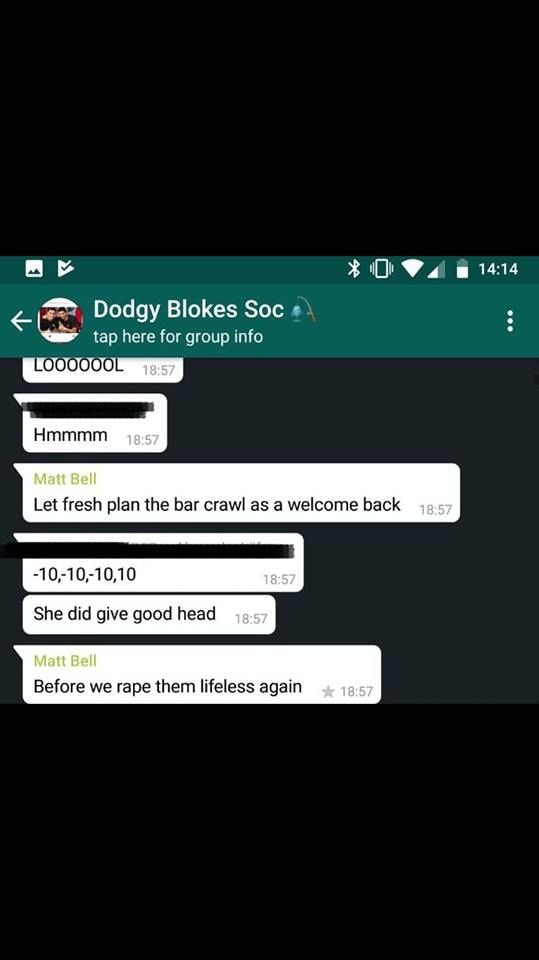 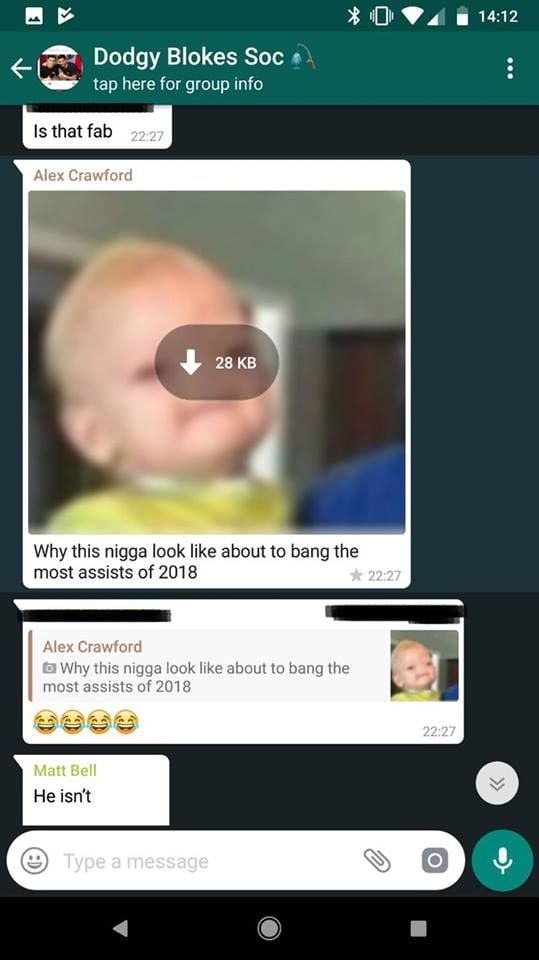 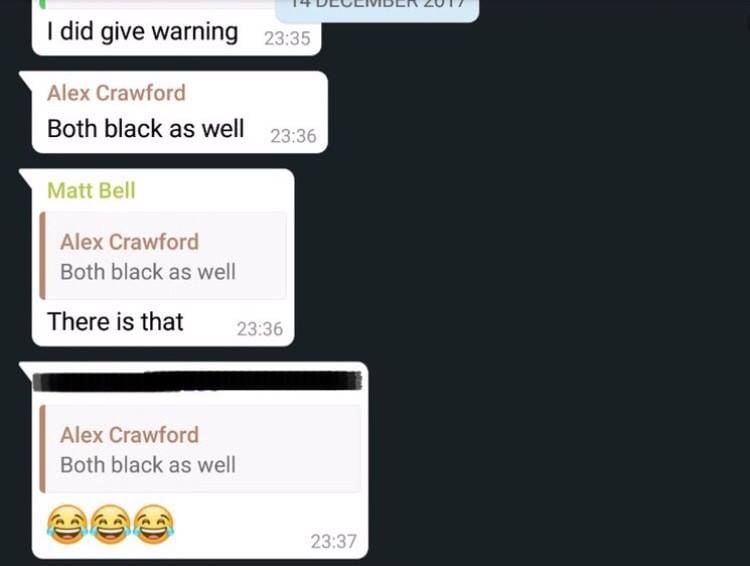 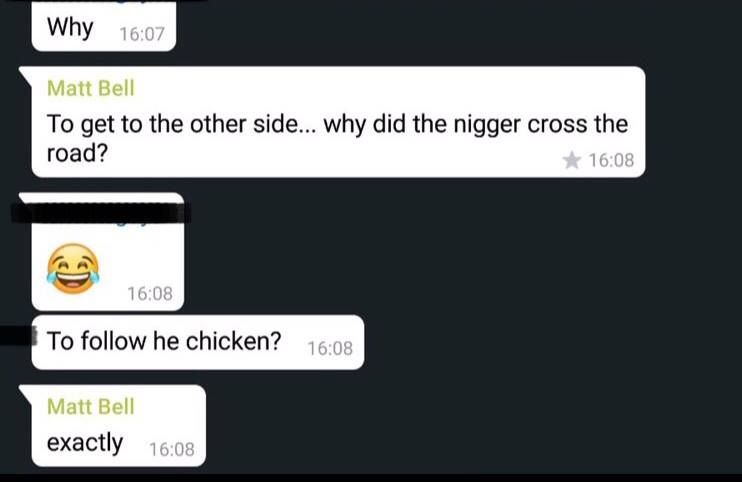 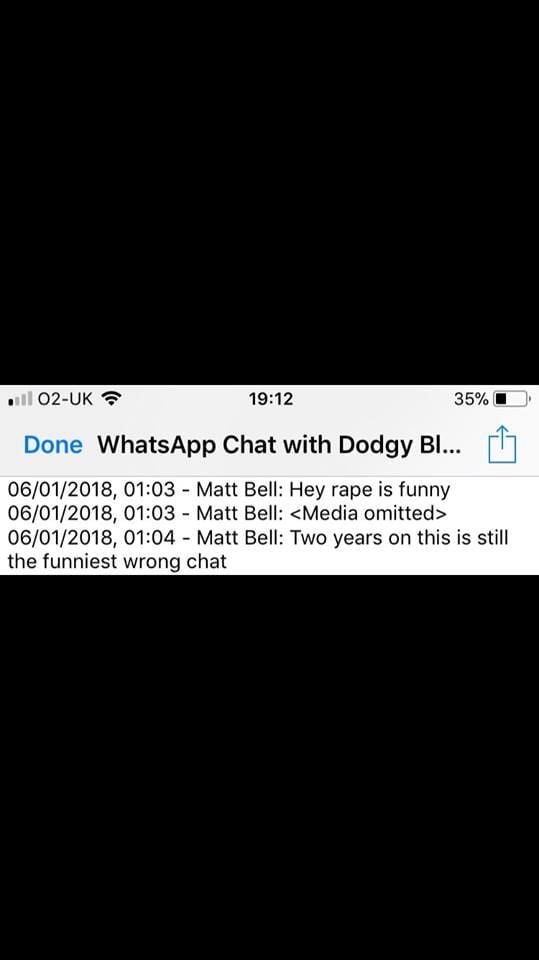 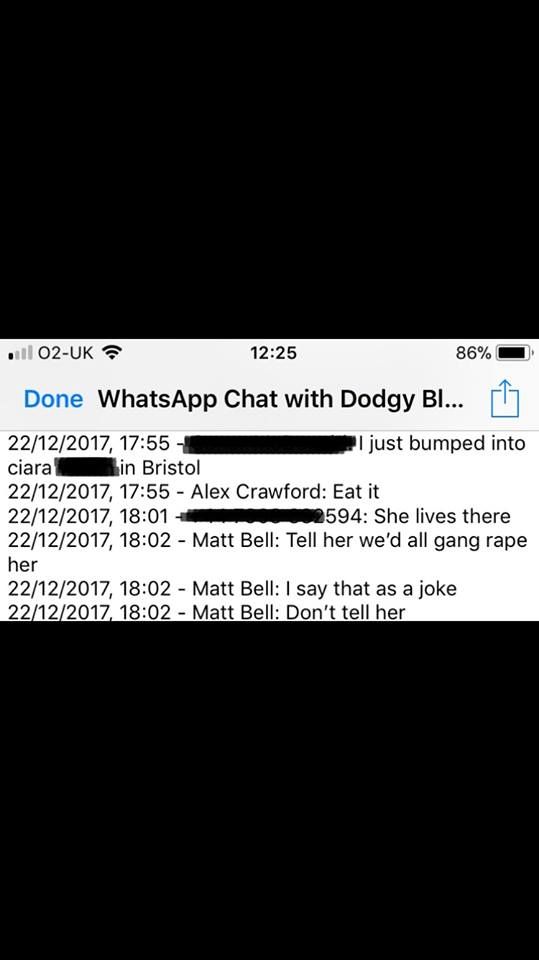 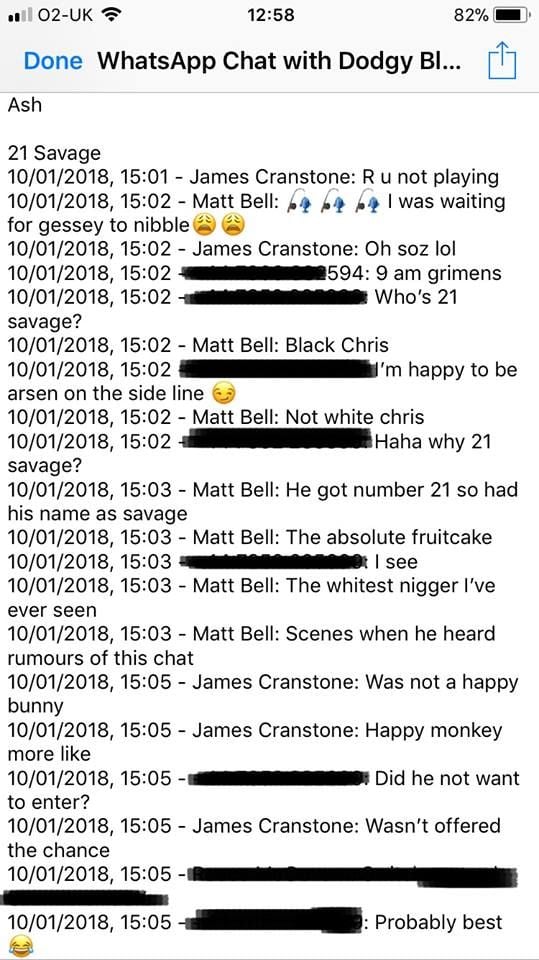 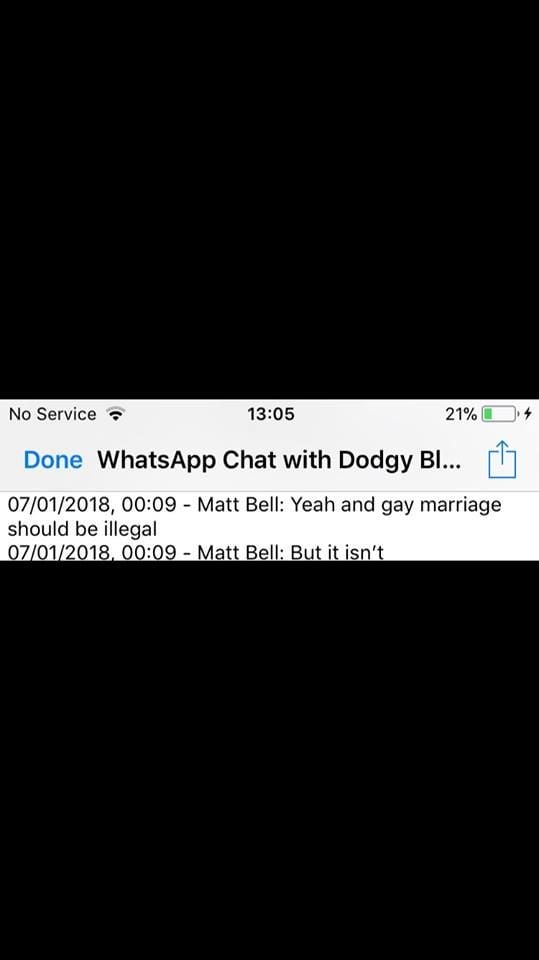 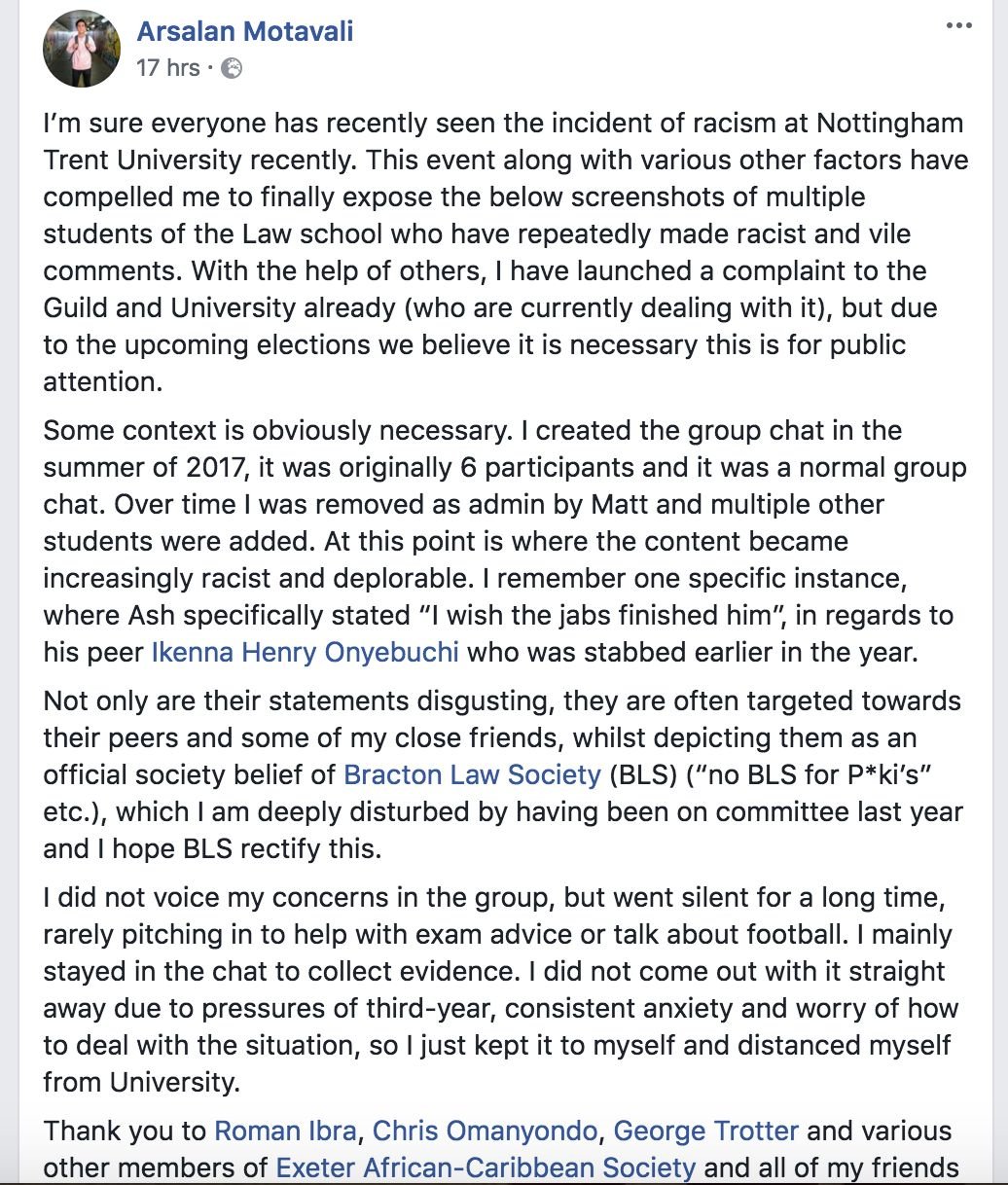 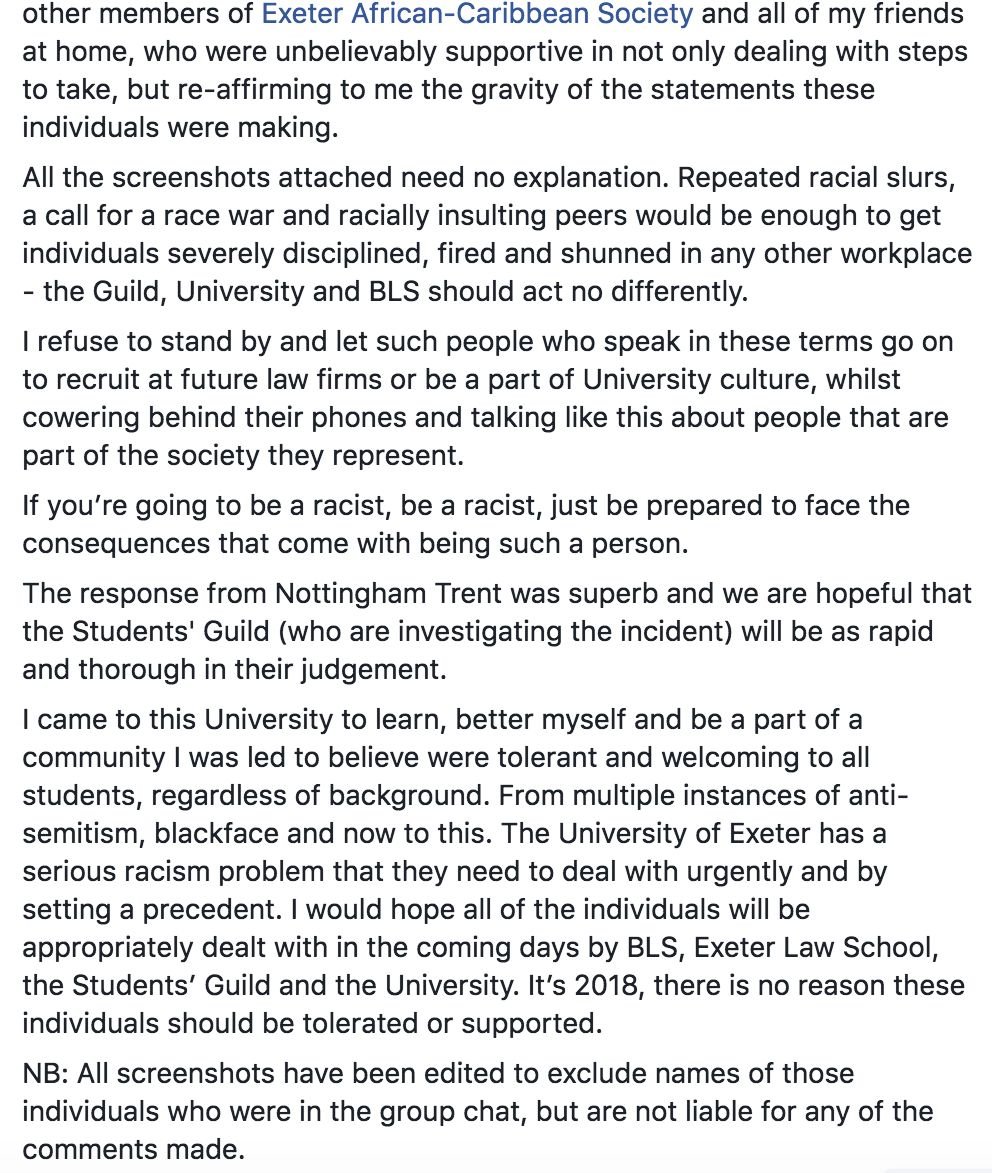 My post did not incite hate, it stated facts, @facebook think it's necessary to delete a post with so much support and following? How is this right? pic.twitter.com/G0IuVIwBlB

This revelation comes as a fresh blow for the university, who despite several attempts to create a safe and accepting environment for all of its students, all too often there are reports or racism, anti-Semitism or sexism.

This is the response from BLS: "Dear Members,

"Following the publication of a series of screenshots from a private group chat regarding some of the Society’s committee members and other students at the University of Exeter, we would like to take this opportunity to emphasize Bracton Law Society’s stance on racism and cultural appropriation.

"Bracton Law Society aims to create an environment that respects the dignity and rights of all students that are part of the society and wider University community regardless of their cultural or racial backgrounds and hopes to support them in all their future endeavours. The views expressed by the individuals involved do not in any way whatsoever represent the Society or its ethos. Bracton Law Society does not condone the nor tolerate such behaviour and will respond in line with the University of Exeter and The Students’ Guild policy:

"The University will not tolerate any form of harassment or bullying and is committed to ensuring that staff and students are able to work and study without fear of harassment, bullying or victimisation, recognising its duty of care to staff, students and visitors under health and safety, equality and employment legislation.

"We would like to reiterate that all of our members are held at the heart of the Society and should you have any concerns regarding the matter at hand or wish to bring forward additional information, please do not hesitate to do so by emailing myself ([email protected]).

"We will be meeting with the responsible members, Students' Guild and University of Exeter representatives to deliver a just and appropriate response. A further statement will be published in due course when we have had a chance to meet with the University of Exeter and the Students’ Guild and can best advise any concerned members.

"Any further comments and actions will be made in the following days once we have had the chance to meet and discuss the incident with the relevant bodies of the University of Exeter and Students' Guild."

"The incident has been reported to the police. Affected students are able to contact our confidential Advice Unit and online wellbeing services.”

Those accused of making the racist remarks have all been contacted for a comment on the situation and we are yet to hear any responses.

The University of Exeter has also been approached for comment.

Update: the University have issued the following statement:

.@ExeterGuild are investigating allegations regarding conduct of society leaders. We cannot comment until the investigation concludes. Where members have broken the code of conduct we will take action, referring to University disciplinary processes where necessary. (2/2)

"The Society does not condone or tolerate such behaviour."

Update: Matthew Bell has now released an apology for the messages he sent in the chat.

If you have experienced racism at Exeter University please contact [email protected] and we will contact you.