Members of the racist 'Dodgy Blokes Soc' group chat have been suspended while the university and Student Guild continue major investigation into the allegations.

The students have been removed from the Bracton Law Society, the police have been informed, and one member has even had his grad scheme offer revoked.

The Tab Exeter is working non-stop to investigate the outcome of this incident and updates will continue. We have since exclusively named and pictured all five members.

This is a full statement from University of Exeter:

"The University of Exeter does not tolerate any form of racist, sexist or bigoted behaviour and is committed to eradicating any instances of discrimination and harassment that may arise

"Following reports of allegations involving a small group of students, the University has launched a major investigation, in conjunction with the Students' Guild, and suspended the students while this takes place. the police has also been informed

"While it would be inappropriate to comment further while investigations take place, full disciplinary action will be taken as appropriate".

The University of Exeter does not tolerate any form of racist, sexist or bigoted behaviour and is committed to eradicating any instances of discrimination and harassment that may arise.

While it would be inappropriate to comment further while investigations take place, full disciplinary action will be taken as appropriate.

While the investigation commences, the African and Caribbean Society offered support to anyone who feels isolated and vulnerable after the messages with racist comments and slurs surfaced last night.

A statement from us on the recent racist incident that has been brought to light: pic.twitter.com/IKg2XAw6WB

Since the messages were exposed people have spoken and took action on Facebook by giving the law firms and society one star ratings. Bracton Law Society's ranking on Facebook fell from 4.5 to 1.4.

Law firm Hill Dickson LLP where one of the students, Matthew Bell, was supposed to start training contract in summer also issued a statement, treating the issue as a matter of urgency. Their ratings also went down to 1.2 after people reviewing them in the light of the events. 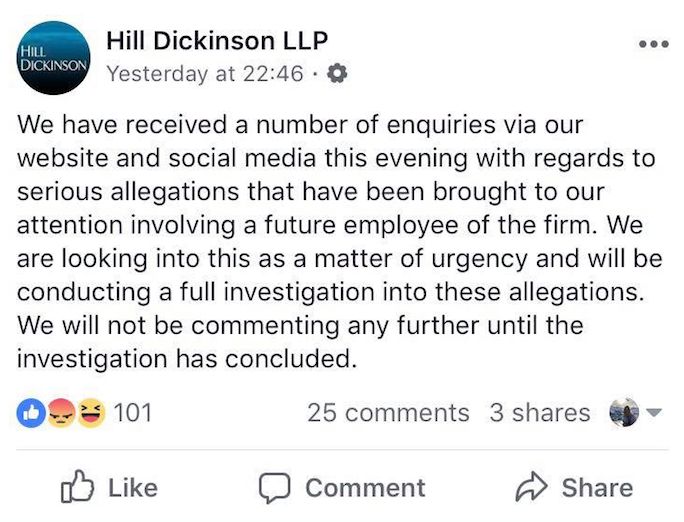 Update: Matthew Bell has now released an apology for the messages he sent in the chat.

Pictured above is three of the five BLS members in question. If you have photographs of James Cranstone or Bailey Grant, please email them to [email protected]

Additionally, if you have experienced racism at Exeter University please contact [email protected] and we will contact you.