Police were called to a number of gatherings over the weekend

Exeter Uni has suspended some students for breaching Covid-19 rules.

This comes after videos of mixed-household parties came out over the weekend despite the rule of six. Exeter Uni has also asked students not to mix households.

ITV reported that police were called to a large party on Sunday and two smaller ones on Friday. There were also seven penalty notices sent after a party at a uni hall. 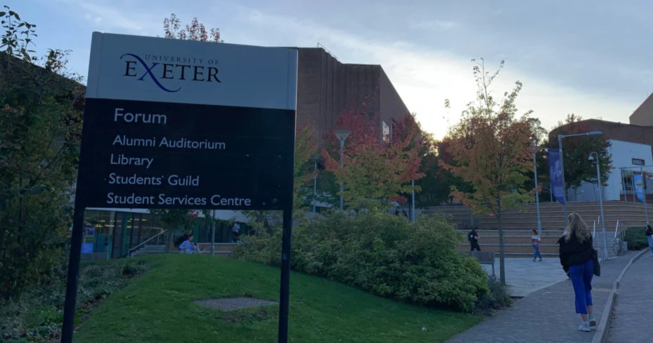 A University of Exeter spokesperson said: “Students are required to abide by our ‘Safe Community Charter’ and the vast majority of students have behaved impeccably but where students break the rules we will take action.

“The University is continuing to work with both the police and local authorities to share information and coordinate responses to any reports of COVID-19 rule breaches. Importantly, the Director of Public Health for Devon reports that we have seen a ‘successful reduction in student cases with no sign of significant spread thanks to the swift actions of the University and other partners in working together to contain the situation.”

He told ITV: “In the South West, there were over 493 cases per 100,000 of population (for the whole of the pandemic), up to 18th October. Scientists estimate the doubling time in the UK for new infections is between eight and 16 days and is even faster in some areas.

“Earlier in the year we were fighting a semi-invisible disease, about which we had little knowledge, and it seeded in the community at great speed. We now know where it is and how to tackle it– let’s all grasp this opportunity and prevent history from repeating itself.”

•Okay so Snoop Dogg performed at Timepiece in 2014, and it’s the best thing ever

• ‘I peed in the TP bin’: All your wildest pre-Covid Exeter night out confessions

•‘The postman’s quite sexy’: 12 things you’ll overhear isolating in an all-girls house

It looks like summer is finally starting to look up

‘Misogyny and violence against women must change’

It will take place this Saturday at 6pm

Who will it be this week? Vote for your fave Exeter bachelor in round three

One boy thinks Shrek is a romantic movie

Make sure to vote for your fave gal to see her in the final!

One boy’s patatas bravas will win your heart

Which gal are you voting for in Exeter’s most eligible bachelorette round two?

One girl has promised to buy everyone who votes for her a round on June 21st, so she definitely has mine

They’re not the WW2 bomb, but this week’s Looks in Lockdown is still explosive

We are heading into Spring style with a BANG

Over 300 students are still unable to return to their accommodation

Your parents definitely refused to pay for Sky

Riots have been ongoing this week

Young people need to ‘do their bit’ and get the vaccine, according to the government

Fair enough, guess I’ve been sat on the sofa all year for a laugh

Prince Philip has died aged 99: Here’s what we know

The Royal Family has said he died peacefully this morning

Enjoy the quiz, I hope it makes you very happy

As we’re talking about blood clots, where is the government’s energy to improve the pill?

Investigation: Why do just one in 14 students report sexual assault cases to their uni?

The real number of sexual assaults at UK universities could be as high as 15,000 a year

The video has 15.9 million views

Ranked: These are the dating shows where you’re most likely to find a relationship

Love Is Blind has an impressive 50 per cent success rate

This looks so much fun

The dad has denied he paid $1.7million to help get his three children into university

Ranked: These are the most forgettable X Factor judges of all time

Forgot all about Nick Grimshaw