My 10 top tips for first-time directors

How to be, or how not to be, a great director

Oh, hi there. I’m Joe Venable, though you might know me better as the visionary heart-throb writer-director of Cymbeline: The Musical.

You’re here, naturally, because you want a portion of my wisdom about how to direct. But guess what? Being a great director is hard. Fundamentally, you’ll need three things: alertness, alacrity, and alliteration. Also, the ability to group things into threes. But here, by way of supplement to this golden rule, is my list of ten additional tips on how to be a great director.

Make a life-sized cardboard model of yourself and bring it to all rehearsals. Cut out your eyes and place a gentle but perceptible red light behind them. Now the cast can feel your beady gaze on them at all times, allowing you to spend rehearsals playing on your phone, snoozing, or curling up in a ball and gently weeping while rocking back and forth.

Surprise is everything. There is no rehearsal that cannot be enhanced with an unexpected change of line, character or even genre. For instance, on Cymbeline: The Musical, I spent considerable time helping an actor perfect the role of Posthumus, before surprising him five weeks into rehearsals with the news that he would in fact be playing the decapitated corpse of Cloten. Only through the preparation of dozens of rehearsals and the memorisation of literally hundreds of unnecessary lines could I truly prepare him for the role.

Mention Stanislavski. Stanislavski. All the time. There is no sentence that will not be more strictly adhered to if it is preceded by the phrase: “I believe it was Stanislavski who said…”

Also, the word “Stanislavski”, though holding no actual meaning for me, is extremely enjoyable to say, which is a great stress reliever. 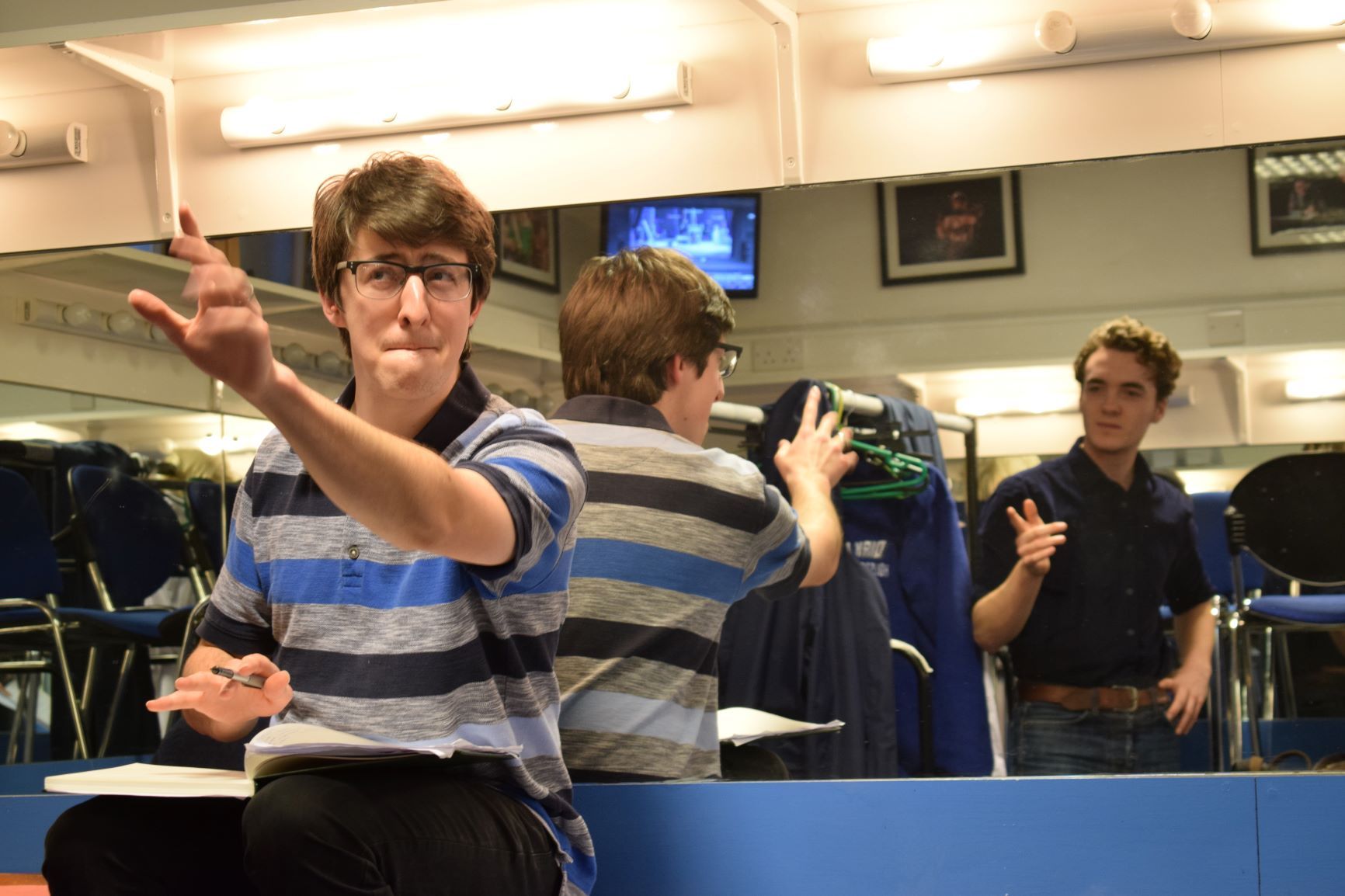 A young actor, under my tender guidance, appreciates anew the wisdom of Stanislavski. (Photo: Olivia Railton)

Bring a small jar of pickled human thumbs to every rehearsal. Never explain.

Grade every cast member out of ten on a daily basis. Never award less than an eight; occasionally give elevens. Then the day before opening night, spectacularly reveal to the cast that you have in fact been grading them out of twenty the whole time. This sudden jolt from hubristic complacency will give your cast members the fortitude they need to truly perform on the night.

Shut off your senses. Try watching a run-through with your fingers in your ears and your eyes shut. This will give you a fresh perspective on how your show is smelling and tasting. It’s also a super morale boost for your cast.

Be sure to give everyone a slightly different version of your script. Where a discrepancy occurs, sit everyone down and encourage them to talk through their different readings. At the culmination of this inevitably long, confusing and distressing process, explain at length how this reflects the magnificently ambiguous emotional depth of your play. Do not resolve the inconsistency.

Milkshake your leads. Everyone loves a good milkshaking and your lesser cast members will enjoy seeing these so-called big shots taken down a peg. Occasionally milkshake a lesser cast member so they know their place. Should your make-up or costume team complain about the fact you are covering their carefully constructed costumes in creamy vanilla that takes hours to wash out, milkshake them too. They will thank you later. 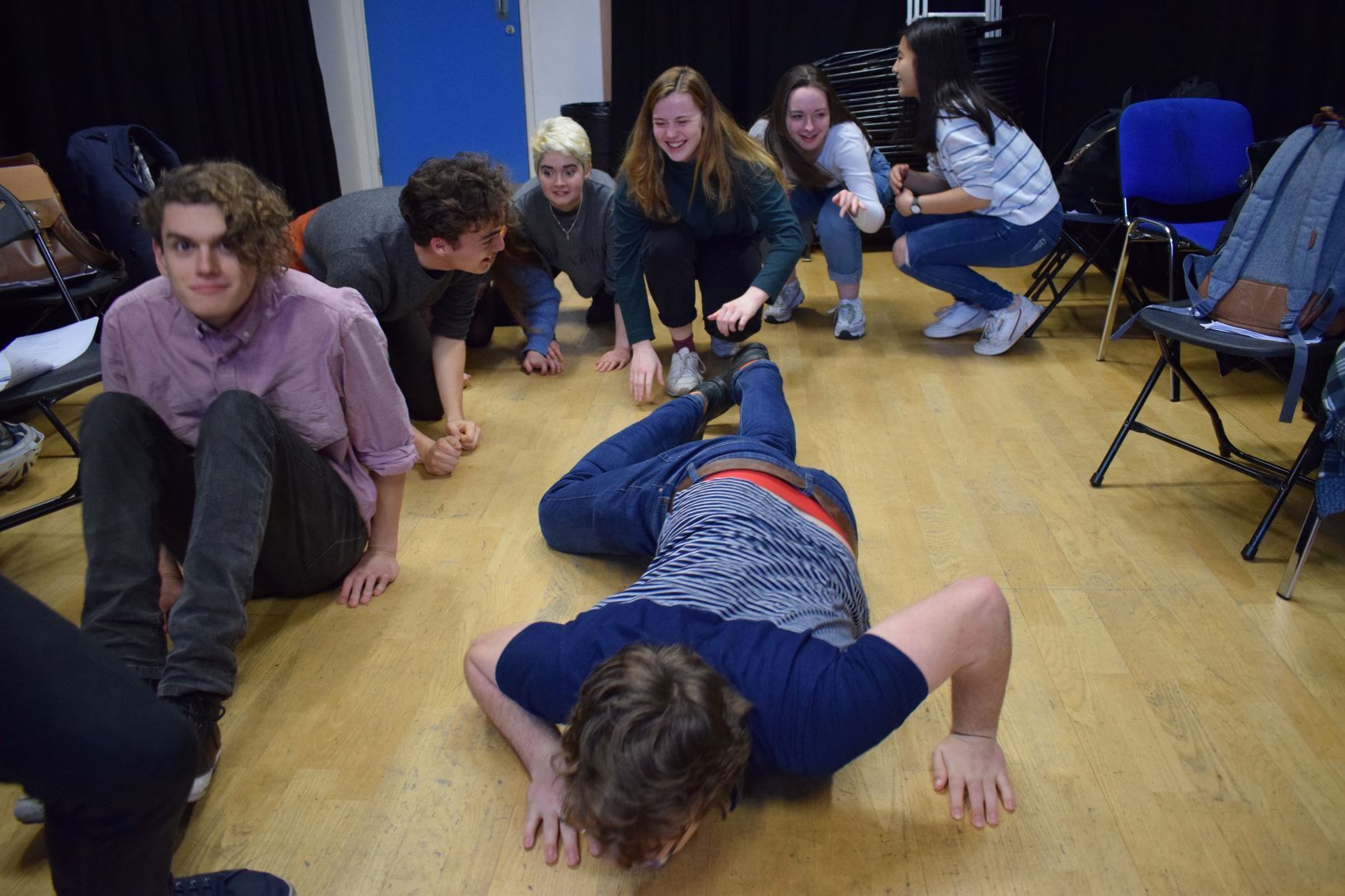 Grateful for not having been milkshaked, the cast give of their best to the production. (Photo: Olivia Railton)

Help promote your show by writing vacuous, tangentially related pieces for student newspapers, liberally peppered with the name of your production. For example, while I was working on Cymbeline: The Musical,

After opening night, be positive – fist-bump or hair-tousle every cast member, according to age, and focus on what went well. At the end, just as they're about to leave, tell them you rate their performance “ten out of ten” before grinning wickedly and sinking your chin into your neck.

And there you have it – a comprehensive list of techniques and tricks for a happy, well-motivated production. Of course, for the practical masterclass, be sure to come along to Cymbeline: The Musical, running from Wednesday February 26th at 11pm at the ADC Theatre. I believe it was John Stanislavski who said: "You'd be a blithering fool to miss this one."