Are porters actually the guardians of the port?

Having finished my prelims, and with – quite literally – fuck all to do in my life, I decided to take it upon myself to answer something nobody ever asked. A myth spread only by dodgy punting tour guides to unsuspecting Chinese tourists. A rumour steeped in history, as old as Cambridge itself, probably. A question so irrelevant, so fantastically unimportant, that nobody apart from me and the author of Camfess #2813 actually gives a shit.

The god tier of procrastination, not that I even have anything to procrastinate for anymore. Are the porters actually the guardians of the port? 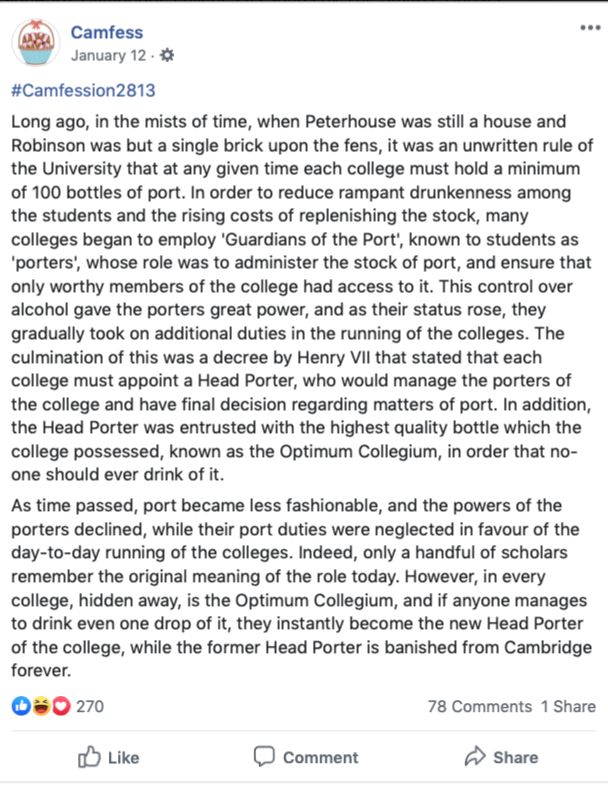 In the least productive investigation since Operation Grange, my first port of call (pun intended) was the Girton College bar. It was 8pm. I wanted to examine first-hand just what the porters had been guarding, and whether it is true, in fact, that every college keeps over 100 bottles in reserve at all times. I was then hoping to taste the port, preferably the entire bottle, also preferably by myself – all in the name of research. Yet when I arrived at the bar, I was shocked and frankly delirious: they had run out of port! What did this even mean? Are our porters just really shit at guarding the port? I was overwhelmed. It couldn’t be that simple. There must be an explanation for this conundrum. There was something fishy going on with the Girton port, and I was determined to get to the bottom of it. And the bottle.

After a restless night, the next morning, one question tormented my mind. If the porters are really the guardians of the port, then why was there no port left? Was it the porters who drank all the port? Desperate for answers, armed with conspiracy theories inside conspiracy theories like some bad inception knock-off, I headed to confront the Deputy Head Porter. The Man. The Myth. The Legend. Brian Buncombe.

I knocked and after a slight pause, there came the booming voice of a porter whose wit, masculinity and portering prowess could only be aspired to in envy and never ascertained. “Enter”, he proclaimed. I did, in awe of the majesty of this Great Beast. I was prey, entering into the den of the predator. It was like something from a David Attenborough documentary, only homoerotic. 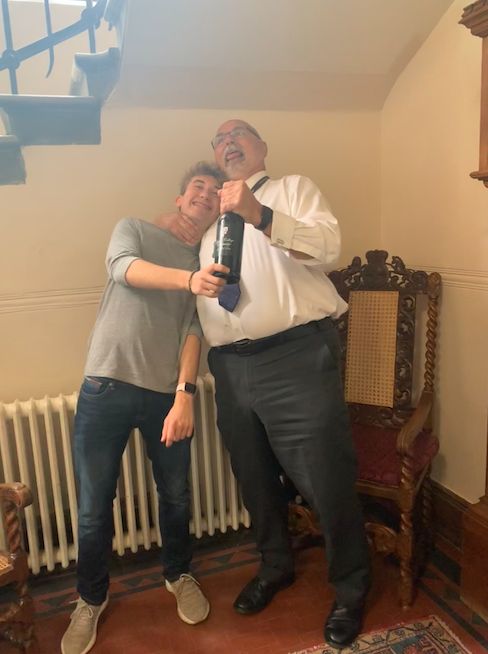 As captivated as I was, I remembered what I was here for though. I needed answers. “Where’s the port?”, I stuttered. “What the hell are you talking about?”, he replied. “Is it true that the porters are the guardians of the port?”

Mr Buncombe was not in a co-operative mood, though. He wasn’t giving his secret away today. “I have literally no idea what you’re talking about. Are you alright?” he asked, gesticulating towards the head. After an uncomfortably long pause, a trademark of most of my social interaction, Brian finally concluded, “Piss off and stop wasting my time!”

Feeling dejected, I resorted to scouring the internet to little avail. In my moment of darkness, however, there came an epiphany. Camfess #2813 clearly stated the powers of the porter had decreased over time. Perhaps Brian really did have no idea what I was talking about. Maybe the porters used to be the guardians of the port? As a classic history student, I concluded the only way to move forward was to look to the past.

I rushed to the Seeley Historical Library. After I had registered for an account (because, as a history student, I had never taken a book out of the faculty library (#weirdflexbutok)), I took out all the books I could find on port. I even sent an email to my DOS proclaiming that I had found a question far more important than my weekly supervision essay, and asked for the ballsiest extension since Theresa May. And, much like the Brexit process, this investigation was proving confusing, wasn’t really going anywhere, and, on reflection, totally pointless. 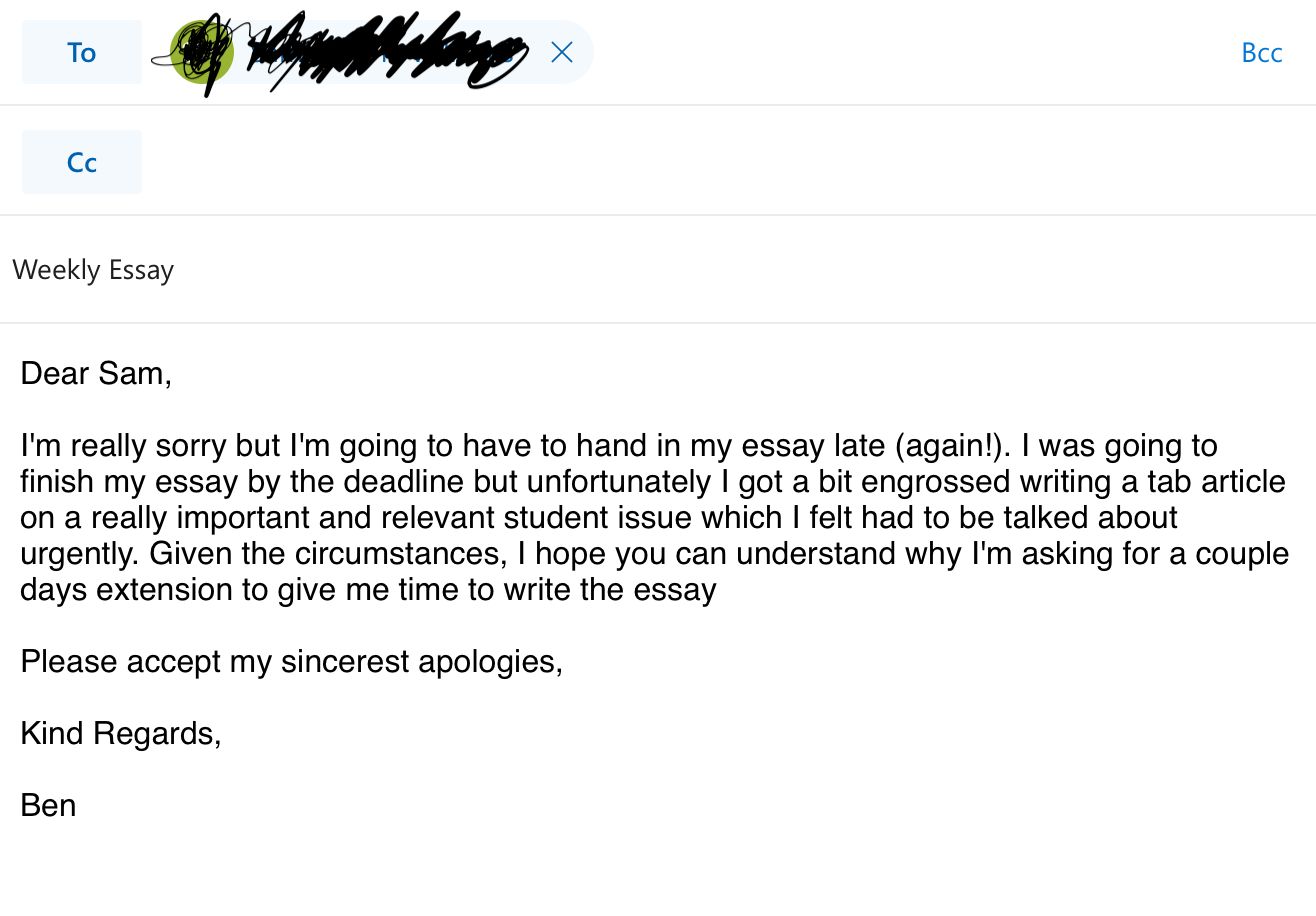 Even though I scoured the archives of the Seeley, I was surprised to find there was actually nothing reputable written on the topic. If the porters really were the guardians of the port in the past, they must have kept it hidden from every single historian. Seems plausible.

Having exhausted all possible options, I gave up. I resigned myself to the fact that the myth would forever remain, in many respects, mythical. I guess some things were never meant to be found out. This whole investigation has been inconclusive and actually quite useless. And I’m sorry to report that you’ve just wasted the last five minutes of your life, time you will never get back.

To add insult to injury, I’ll leave you with this one question. If the porters weren’t guardians of the port, why would they be called porters? Oof. Convince me otherwise, etymologists!

All images are the author's own.