Getting you back to reading for pleasure

Exams are on the horizon, and most of us are in a state of constant reading, re-reading and analysis of texts, articles and countless more. It's tiring. It's enfuriating. And oftentimes, it makes you feel like you never want to read anything ever again.

A common plague (especially for the Engling), it can be difficult to get back to reading books for the sake of reading books after any term at uni, let alone exam term. Because of this, I've compiled a list of 6 books to get back that passion once your exams are over, as well as some recommendations if you liked that pick. Don't forget as well that reading even 10 pages of a book that's different from what you're looking at can be a great way to escape from your revision for a bit and refocus your mind, as well as a good alternative for a pre-sleep activity.

So here it is: 6 books to read once summer has officially begun!

Set in Andalusia (and in part Athens), this incredible novel follows Sophia Papastergiadis as she takes her ailing mother to a last-resort clinic, run by the mysterious Dr. Gomez. Described by Eric Wagner as having 'a transfixing gaze and a terrible sting that burns long after the final page is turned,' this book has everything: a mother/daughter relationship predicated on neither being able to understand or diagnose the other; a tale of is it or isn't it hypochondria; a love affair with an enigmatic German woman; issues of identity and global politics. All of this is rooted in beautifully poetic, oftentimes darkly humorous language, and with mythological and Freudian themes, Hot Milk is not the longest book, but one that will stay with you long after it's finished.

(If you liked this, see also: Cassandra at the Wedding by Dorothy Baker; Americanah by Chimamanda Ngozie Adichie; Number9Dream by David Mitchell)

Winning the 2012 Pulitzer Prize for Poetry, Tracy K Smith's Life on Mars is a collection which spans space, love, and death in a tender, patient, dazzling journey. With its title taken from the David Bowie song of the same name, Smith captures that same electric, cosmic energy and applies it to thoughts about what space and God might be like, as well as smaller subjects like eggs benedict. This is a great way to get into poetry if you've never known quite what to start with, touching on a wide range of topics with great dexterity. 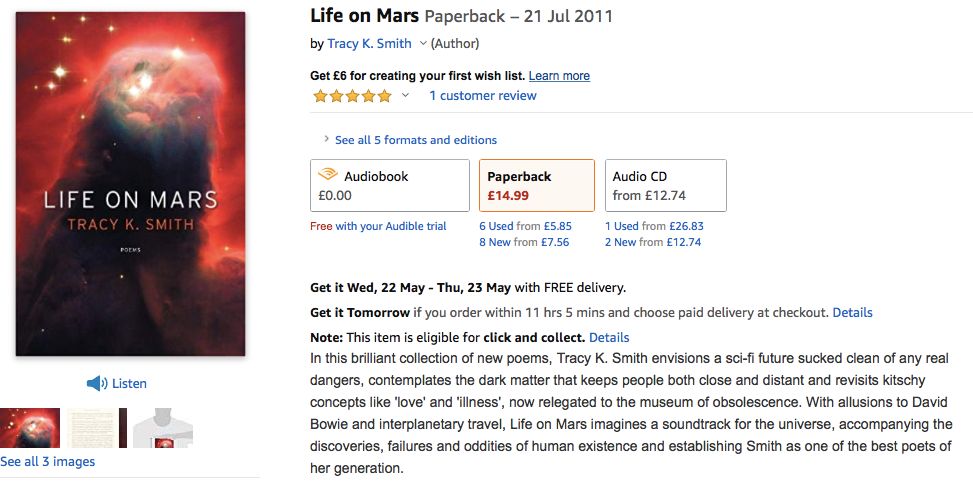 (If you liked this, see also: Beauty/Beauty by Rebecca Perry; Let Them Eat Chaos by Kate Tempest; Loop of Jade by Sarah Howe)

3. The Luminaries by Eleanor Catton

Now for a real meaty summer tome. Catton's The Luminaries follows Walter Moody, a prospecter coming to Hokitika during the gold rush. The night he arrives, Moody goes into an inn to escape a storm and stumbles on a tense meeting of 12 local men. Over the course of the novel, we hear from each of these men as a series of mysteries and crimes get unearthed and resolved in time. Each character is based on a star sign or planet, and as the narrative proceeds each month, thes interplanetary movements dictate how the characters interact with each other. Furthermore, each chapter is shorter and shorter, mirroring the phases of the moon, meaning the book is intricately plotted, structured, and written like a great patchwork. This is one to mull over, devour, and will keep you hanging on a wire for its whole duration. 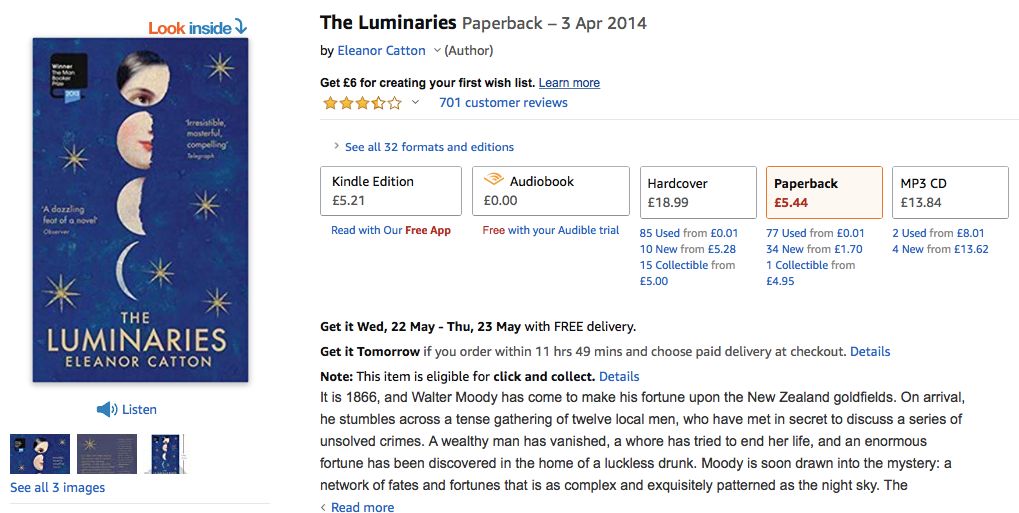 (If you liked this, see also: One-Hundred Years of Solitude by Gabriel García Márquez; Kafka on the Shore by Haruki Murakami; Atonement by Ian McEwan)

This collection of essays by Roxane Gay stormed the bestseller lists when it was published in 2014. Written with Gay's trademark wit, insight and humanity, the collection ranges from topics on Feminism in the modern age and why it's okay to be a 'Bad Feminist', to Gay's time playing competitive Scrabble, as well as her experiences with eating disorders, and hot takes on the racial dynamics in films such as Django Unchained and The Help. In turns thought-provoking, humorous and entertaining, this contains something for everyone and is a great introduction into thinking about all sorts of socio-political (not to mention literary) issues facing modern society. 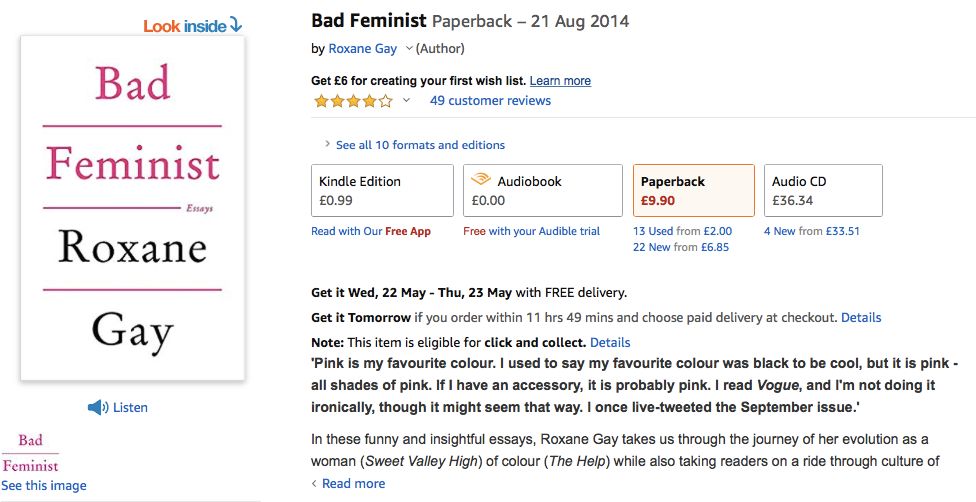 This is a very exciting one for me. The sole collaboration between these mightyily funny authors, Good Omens follows the story of one angel, Aziraphale, and one demon, Crowley, as they try to stop Armageddon from happening. Why? They'll miss Earth if it goes, not to mention the unlikely friendship they've fostered since the beginning of time. Featuring classic Pratchett and Gaiman dialogue, one-liners and fantastically silly scenarios, this cult classic has long been one of my favourites. Perhaps even more exciting, a series adaptation is coming to Amazon Prime on May 31st, featuring David Tennant as Crowley, Michael Sheen as Aziraphale, and written by none other than Gaiman himself.

(If you liked this, see also: any other Terry Pratchett or Neil Gaiman novel; The Hitchiker's Guide to the Galaxy by Douglas Adams; Capital by John Lanchester)

6. Game of Thrones (from A Song of Ice and Fire) by George R. R. Martin

So Game of Thrones season 8 has done some things, hasn't it? Some of them have been alright, but most have sort of polarized viewers, with many falling on the side of disappointment, confusion, and in some cases pure outrage. The vast majority of criticism geared towards the latest season has been aimed at the writing, which could very well be attributed (at least in part) to George R. R. Martin no longer being involved in the series' production, and the series going beyond the books. Therefore, what greater way to dress those wounds of disappointment, confusion and outrage than going back to where it all started, and jumping into a world solely of Martin's creation? And who knows, maybe once you've finished these 7, the next instalment, The Winds of Winter, might be a bit closer to seeing the light of day. 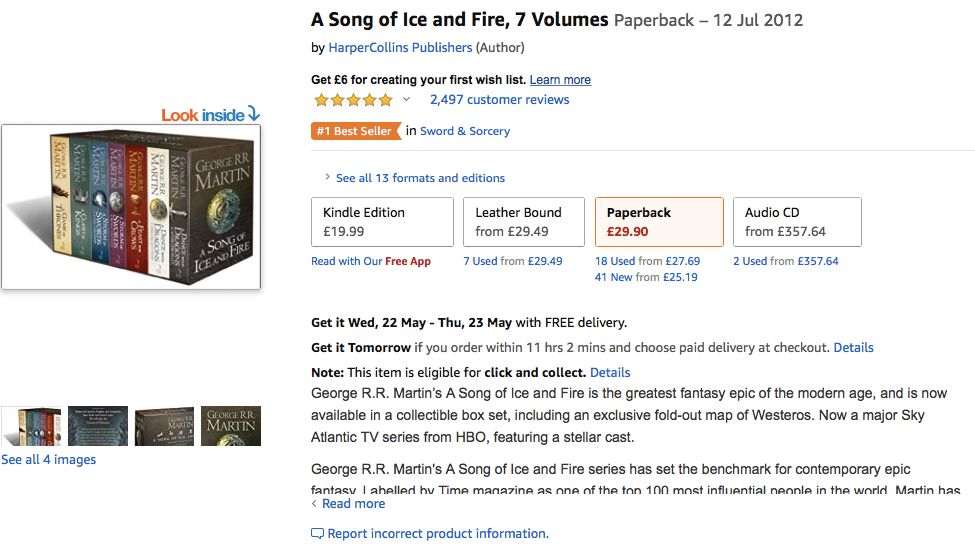