The Tab talks to Wes Streeting: Brexit, Brexit and a touch of Drag Race

Wes Streeting MP, a Selwyn History Alumnus, and ex-CUSU president came to Cambridge to do a Pembroke Politics talk on the future of the Labour party. As a strong backer of a People's Vote and the chair of the All-Party Parliamentary Group on antisemitism he has been critical of the leadership in the past, making for an interesting talk.

Wes took a bit of time at the start of the event to talk to student press, and The Cambridge Tab was lucky enough to get an interview with him.

The first question I asked was concerning CUSU Council's decision last term to formally endorse a People's Vote on Brexit, and the fact this decision was condemned by members of the university. Wes immediately responded with a "good to hear CUSU's still making the right decisions". He elaborated that, as Brexit is going to affect literally everything – particularly higher education institutions and EU nationals within our Universities, it was only right that such institutions continued to organise and apply pressure against Brexit. Streeting was pleased that students were making their voices heard.

Staying on the theme of Brexit (shock, horror, Brexit was discussed in a political interview?! ?) I asked Wes what his thoughts were on potential conflict within the Remain/Soft-Brexit Camp, following David Lammy's recent article opposing the Norway+ option which seems to be gathering strength within the Commons. Wes replied with an appeal for people to calm down a bit, as he'd actually vote for both a People's Vote and the Norway+ option if either were presented to the Commons. 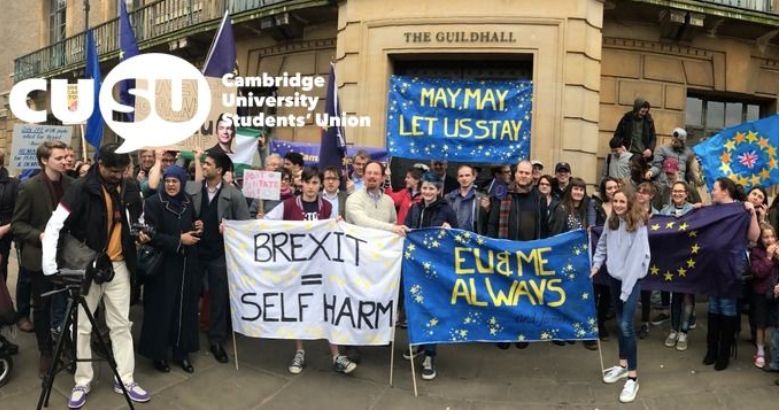 He agreed there was a risk of the Remain/Soft-Brexit Camp potentially infighting on this issue, yet maintained that Norway+ would not be the ideal solution. Whilst it would mitigate the economic consequences of a Tory Brexit, it is nonetheless Brexit in name only and would cause outrage in many quarters. He acknowledged that a People's Vote could similarly cause popular unrest, but pointed out that nearly all options for Brexit are bad both economically and in terms of the social unrest they'll almost undoubtedly provoke.

Therefore, Labour should stick to its principles and advocate for a People's Vote. Although, Wes himself as the MP for a Leave seat acknowledged the fact that Leave could still win a second Referendum and made his argument on the basis of "informed consent" due to the fact that the Brexit advocated in 2016 is essentially undeliverable. Furthermore, later on in the talk when discussing a People's Vote in regards to issues of political violence, Wes evoked the memory of Cable Street and how the left historically hasn't let fascists disrupt our democracy – "instead we say no pasarán".

Has The Tab spoken to the future leader of the Labour Party? Only time will tell (Credit Chatham House, London, via Wikimedia Commons)

After this I asked Wes about Cambridge CLPs recent decision to endorse a People's Vote, and how this reflects the majority of Labour Party members and voters views in this regard, yet it seems that the leadership which was elected on a "power to the members platform" still seems resistant to embrace a People's Vote. Firstly Wes welcomed the move and said he appreciated the difficulty of Corbyn's position: needing to accommodate passionate Remainers, Bennite Lexiteers, reluctant Leavers and the many MPs with leave voting seats. But he re-emphasised the need for Labour to stand up for the party values and expressed his wishes that Corbyn would come around as ultimately "there's no socialism in going it alone". When briefly asked about Len McCluskey's bold (and in this writer's opinion bizarre) suggestion to hold a second referendum without Remain as an option on the ballot paper, Wes scoffed and said Len McCluskey should think about the thousands of Unite members he represents and the threat posed to them by Brexit.

After all of this I asked Wes about an issue a thousand times more important than Britain's future relationship with the European Union: RuPaul's Drag Race All Stars. When pushed for which Queen he thought deserves the Crown, Wes initially backed Gia Gunn because she's amazing, but when pushed further he granted his official Parliamentary endorsement for Trinity the Tuck Taylor.

Following our interview, Wes delivered an insightful and fascinating talk on the Future of the Labour Party and Pembroke Politics society should be very proud of themselves for organising a brilliant evening. Andrew Adonis has singled out Wes Streeting as a potential future leader of the Labour party, and following our interview and the subsequent talk this writer is inclined to agree.