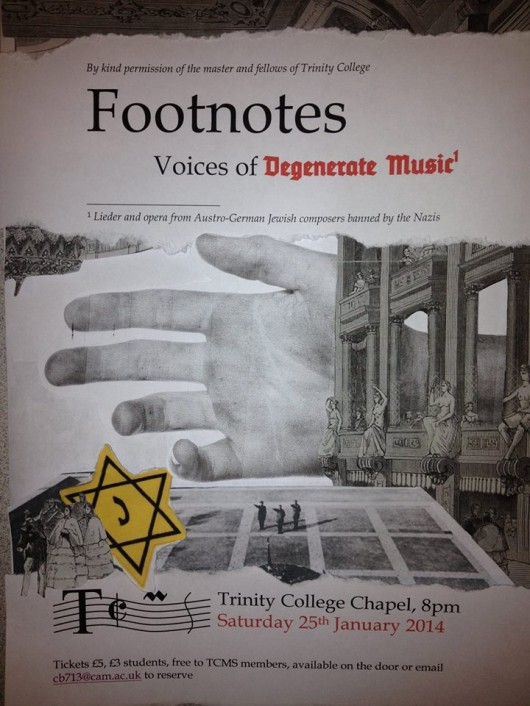 Opera is often overlooked in Cambridge, spurned by audiences and performers alike for the glitzier lights of the ADC. Adam Cigman-Mark, Ceci Mourkogiannis and Femi Oriogun-Williams’ concert ‘Footnotes’ showed just how much operatic talent Cambridge conceals, and what a shame it is that so many students neglect it.

Hosted at Trinity College chapel, the show presented a selection of works by three Austro-German composers, Alexander Zemlinsky, Viktor Ulmann and Franz Schreker. All three were Jewish, and all three felt the brunt of Nazi anti-Semitism – both professionally, via restrictions on the performances of their pieces, and personally, as they were forced to either flee (Zemlinsky), retire early (Schreker) or face imprisonment and eventual extermination in the gas chambers at Auschwitz-Birkenau (Ulmann).

One danger the show faced from the get-go, then, was that of wallowing in self-satisfied piety. It would have been so easy to produce a two-hour concert of mediocre music, drummed out to stroke the egos of an audience that could leave feeling that it had at least done its bit for rehabilitating forgotten Jewish composers. Yet the danger was deftly side-stepped not only by the performers themselves, who made valiant – and successful – efforts to sing engagingly and well, but also by the production team itself, which picked the right ditties and organised them in the right order for what was a genuinely enlightening evening of music.

The concert presented a surprisingly broad range of works, from the muscular archness of Schreker to the more whimsical frothiness of Zemlinsky. Though proceedings began bleakly with a phenomenal performance of ‘Der Konig Kandaules’, played on piano in the pitch black by Adam Cigman Mark, the mood of the evening flitted about, refusing to linger in one mode long enough for us to define it. If Anna Wagner’s ebullient, pantomime-like rendition of ‘Das Bucklichte Mannlein’ made us smile, Gabrielle Haigh’s performance of ‘Berjoskele’ by Ulmann made us think – and think forward, to a time when the little birch tree sung about by the soprano would no longer be able to offer hopeful tidings.

Baritone James Proctor waggled magnificently around the aisle and stage when tasked with the song ‘Betrunken’, managing despite his imitations of a drunkard to sing compellingly. And Mary Galloway, to my mind the most talented performer to have graced Cambridge these last three years, was characteristically beguiling with her two renditions of lieders by Zemlinsky.

The programme notes by Adam Cigman Mark offered an invaluable analysis of the influences of the three composers, inserting them into a broader musical context that again humanised them, preventing us from casting them as ‘victims’ deserving of a condescending ear. With these notes in mind, it was easier to judge the composers as they would presumably have liked, and expected, to have been judged – as musicians, first and foremost, and only later as players in a larger historical moment.

So, overall, a confident production that deserved to be as packed as it was. It is only a shame that it could not have gone on for more performances.