Tom what are you doing pal

A weird hoax is claiming Sherif has died, but don't worry he's fine

For some reason, a Sherif fan account started a rumour that he died in a fire at his home. Given Sherif was uploading stories as of about 10 hours ago this seemed unlikely, but it didn't stop trolls commenting "RIP" below his Instas. 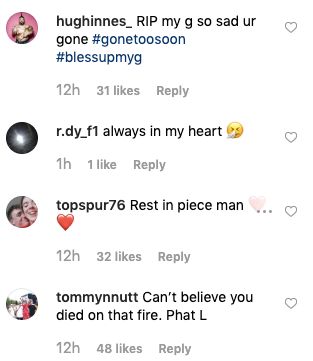 The conspiracy is that Sherif left his hot tap on overnight, which somehow set his house on fire. 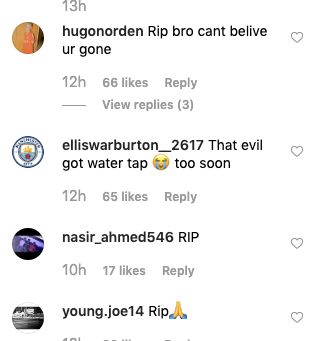 One commenter said: "Can't believe you died on that fire. Phat L."

Another read: "That evil hot water tap. Gone too soon."

The original post, according to The Sun, read: "Rip my boy sherif. My man has f***ing died in a house fire after he left the hot water tap on and spent the last hours of his life suffering horribly.

"Hope his family are OK after this shocking news, rip in peace my bro #blessupmyg."

The second half of the caption read: "If we can all pay our upmost respects by going onto his account @sherif_lanre and commenting how sad we are. (Everyone make sure to follow, like and tag your friends for a gift card giveaway) #loveisland #dead #freeclout."

We're still not quite over the possibility of producers having a hand in Jordan's surprise binning off of Anna this week.

Eagle-eyed fans have spotted Jordan texting on his villa phone multiple times in the wake of his row with Anna, and many suspect he was asking producers for advice.

He was even looking at his phone during that conversation with Curtis. ?

Nah seriously, I've seen Jordan scrolling on his phone twice now, wtf is he looking at? Texts from the producers!? #LoveIsland

Some viewers even suggested Jordan could have been texting Michael for advice after taking his place of the villa's biggest villain.

Michael has defo sent a secret text to Jordan influencing this? #LoveIsland

Some bad news for those of you who hate Curtis, as he's set to be on our screens even more over the next few years.

Yup, the man who shot to fame on the most hetero television programme ever devised is going to be appearing on the UK's version of RuPaul's Drag Race.

Curtis is set to appear alongside his brother AJ, who is a pro on Strictly Come Dancing. Filming has already wrapped.

It would appear the fans are becoming as bat-shit crazy as the Islanders, and this week they've convinced themselves Amber and Greg's date was filmed using a green screen.

Why dose it look like they are behind a green screen?? #loveisland pic.twitter.com/rVLWC7n4dN

Is it me or does the view behind Greg on the yacht look an awful lot like a green screen?? #LoveIsland

Anyone else think this looks like they’re sat in front of a green screen and the background doesn’t look real at al?!?? #LoveIsland https://t.co/RcSNHLRFbP

This isn't the first time fans have been suspicious of a boat date. Last year, ITV had to properly deny accusations that Megan and Wes's boat date was green-screened.

Last night, Maura climbed on top of Curtis in a last ditch attempt to engage in coitus, only to have him say: "Not tonight." She then spent the next day moping about it.

Fans were divided over the incident. Many shared Maura's frustration over the total lack of shagging this year, while others said Maura's reaction was pressurising and indicated a double standard.

Molly mae: 'If I was trying to instigate sex with Tommy and he didnt want to I'd be livid and make him sleep on his own' imagine if a bloke said that about a girl? double standards these days? #LoveIsland

Nahhhh Maura is actually a full on sex pest, admit it If curtis was getting in a mood coz Maura didn’t want to shag people would honestly be ruining that man career ??‍♂️ double standards are high you know #LoveIsland

Molly saying she would make tommy sleep alone if he didn’t sleep with her, imagine if it was the other way round and tommy saying that about molly everyone would kick off, double standards #loveisland pic.twitter.com/wtiQKURS8V

IM SCREAMINGGG DOUBLE STANDARD !! Because if Curtis was pressuring Maura to have sex and getting in a mood with her the way she was this would be a whole different story ??‍♀️ #loveisland

Shane actual Warne called Anna from Love Island a 'rude cow' and no, you are NOT tripping

Love Island attracts all sorts doesn't it? Australian cricket legend Shane Warne is even a fan, and he took a break from his various sports commentary roles to tweet: "Last nights episode of Love Island UK made me happy as the bully and infuriating rude cow Anna finally got voted out.

"Waited eight weeks for this to happen. Yes Jordan should have spoken to her first, but what a reaction (not surprising). FYI, you dodged a bullet, a huge one at that mate."

You think I'm yanking your chain? Here's the tweet below:

Last nights episode of @LoveIsland UK made me happy as the bully & infuriating rude cow Anna finally got voted out. Waited 8 weeks for this to happen. Yes Jordan should have spoken to her first, but what a reaction (not surprising). FYI, u dodged a bullet, a huge one at that mate

If you've been watching six weeks of Love Island and haven't seen the Olay guy in your dreams at some point you're probably not even hardcore. Depressingly, it turns out the guy in it is actually a big deal and has a sizeable following.

His name is Callux and he has 2.9 million subscribers. His Wiki page describes him as a "friend of the sidemen." The sidemen, for reference, are KSI's gaggle of YouTuber man-children friends.

Callux's videos, in a nutshell, are annoying (see below):

"1M followers and only 24k liked this picture which is the most important one – an AD. You are actually getting paid to deliver results and it’s not even close to five per cent." Yikes.

Last week we saw George plugging car air fresheners, and this week he's on stop number two on the Love Island pain train to obscurity. Here he is bragging about getting his teeth whitened:

Massive thank you to @dr_richard__ for making my smile shine ?✨

George, mate, it's time to go.

Anna’s sister apologised for being mean about Jordan

After her absolutely 10/10 tirade earlier this week, during which she claimed Jordan was hiding his feelings in the gaps in his teeth, Anna's sister has been made to apologise.

She said: "Sorry to anyone who I may have offended with my insults towards Jordan but you only have to imagine how hard it is watching your sister be humiliated and insulted through actions in the way she was. Your initial reaction is to insult and humiliate back.

"Probably not the right way to handle things but in the heat of the moment I'm not exactly a turn the other cheek type of person.

"I automatically wanted to embarrass the boy who had broke my sister's heart like that".

According to The Sun, Caroline Flack has been dating tennis player Lewis Burton, having found him on celebrity dating app Raya.

Here is a picture of him looking fit:

Out of office ✅ #selectmen #london

Look at the state of that caption. Just ew.

Jade from Little Mix is team Amber and quite right too

An earnest fan tweeted the Little Mix account asking who their favourite Islander was and Jade replied to say it was Amber.

Queens supporting queens – we love to see it.

Tragic SponConWatch: Tom is plugging BBC Bitesize… because why the fuck not

We figured out why the Islanders aren't plugging as much tat this year and tl;dr it's because they're BORING.

Thank God for Tom Walker, who perplexingly has done a video for BBC Bitesize.

@bbcbitesize bit I did on Monday. After last nights @loveisland ep it seems quite fitting. #healthyrelationships

The video is all about being a good listener. In it, he tells us not to give advice we wouldn't do ourselves. He also says "it's difficult to bite your tongue" and doesn't even flinch.

We've spoken before about the series of awful attempts made by the octogenarians at The Independent to engage with Love Island, but this recent piece in The Guardian truly is something else.

Under the headline "Get LIT: how Love Island Time replaced GMT", Adrian Chiles literally wrote: "'Lit', after all, I have recently been told by the above teenagers, is an adjective meaning really great, or something."

You need more Love Island content, don't lie to yourself. Read these: