Over the weekend, the DONT WALK Charity Fashion Show took place and, as a first year, I was eager to check out what all the hype was about. One thing was for sure: hey certainly don’t come cheap with a standard ticket putting you back £90.

Ironically, it didn’t even take place in St Andrews but at a secret location only revealed on the actual day. The Bowhouse in Anstruther was an escape from the usual places in town, accessible by a fleet of buses provided, although there was some controversy surrounding the transport on St Fessdrews. However, it turned out to be a unique and alternative venue, which added to the sense of mystery surrounding the whole event. Even walking in, you were guided first through an area containing all the food stalls ready for some tipsy revellers after the show, then through a blacklight walkway, perfect for some artsy instagram shots, before entering the runway area. 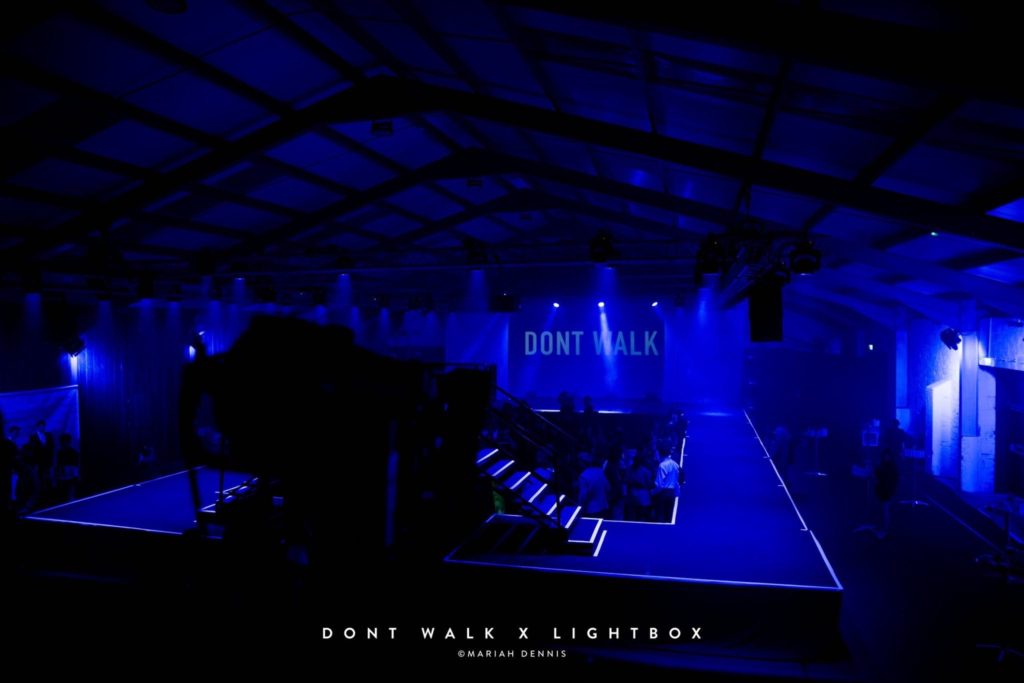 From there, guests and press were led up to a very swanky cocktail bar area, overlooking the whole room, with a great view of all the looks served on the runway and in the crowd. Here, the St Andrews student body showed up, bringing power blazers, feathers, mismatched prints and multiple neon ensembles, a great choice with all the blue UV lights.

VIP patrons arrived (fashionably?) early, pooling into the inside area of the stage, and were greeted with a champagne reception. When that ran out however, there was the opportunity to shell out even more than the £100 VIP ticket, with a bottle of rosé costing a whopping £80. The Union prices are shook. 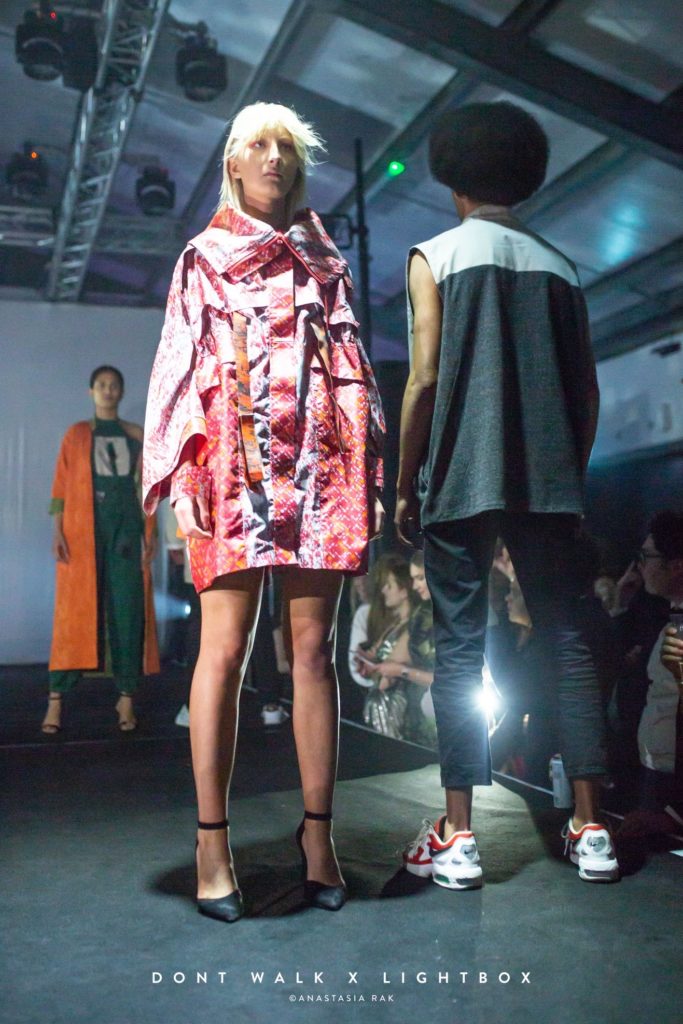 Standard ticket holders arrived about an hour later and had access to a view on the outside of the catwalk. A really cool thing about the stage is that it was set up so that pretty much everybody had a good view of the models, meaning close-ups of the DONT WALK runway were gracing plenty of snapchat stories. Also, serious props to the models for manoeuvring the elevated bridge situation, especially the girls in ky-high heels!

There were definitely some stand-out points during the show, which began totally unexpectedly with a couple of contemporary dancers giving an energetic performance to changing backgrounds of drought and forest fires. This was accompanied by a montage of talks on the human effect on climate change and the fashion world within that, immediately inserting an environmental consciousness into the show.

The rest did not disappoint as many different looks from various designers just kept on coming, with a particular shout-out to the textured orange swimwear ensemble with the giant floppy hat, which even received its own Crushes post.

There was a definite shift in the energy of the crowd at the much-anticipated moment when the models emerged, clad in lingerie and swimwear and I saw quite a few phones being quickly whipped out. All eyes were glued on the models anyway throughout the show, with almost hypnotic music and wacky looks being a perfect combo. Or maybe it was a distraction from how cold the venue was, especially for those going without jackets to showcase their outfits for the greater good of fashion.

The models themselves usually looked like they were having a great time however, going from serious facial expressions, to genuinely smiling and enjoying themselves, even high-fiving the crowd, especially towards the end, which created a sense of celebration and also excitement for the after party to commence with the DJ Mall Grab.

After the show, everyone hurried en masse to the bar, or to the food stalls to line their stomachs more before going to the bar.  On offer food-wise were pizzas, mac’n’cheese, crêpes and my personal favourite, the vegan burgers, which were really yummy and fitted into the overall theme of the night of promoting sustainability. Double yes. Also, I would 10/10 recommend getting crêpes with Oreos if you haven’t tried them. Life-changing. 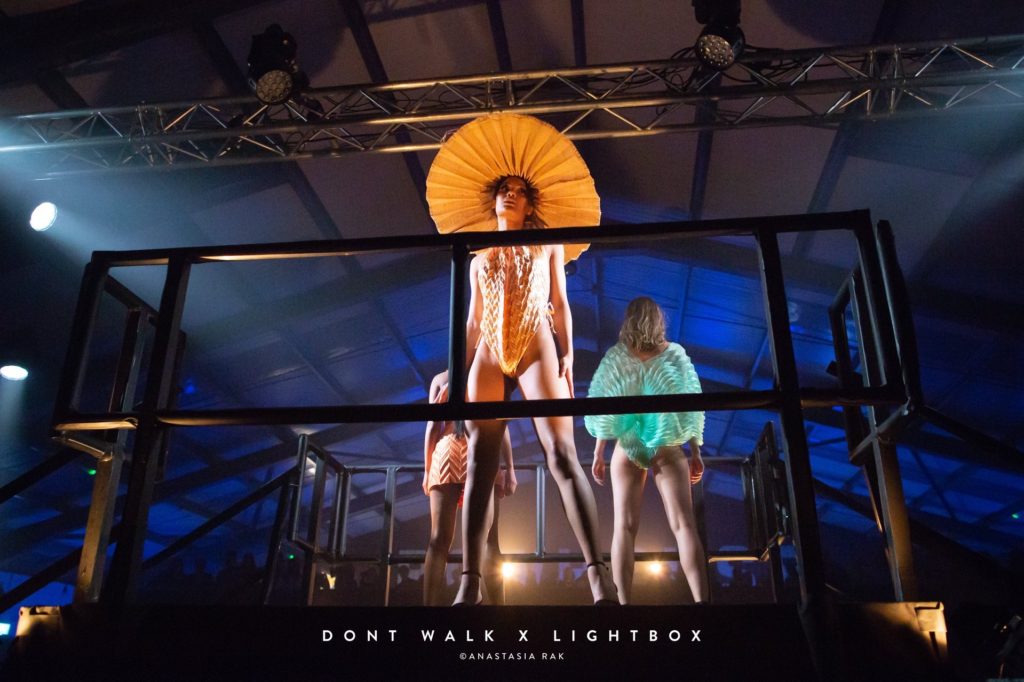 The after party was then the end to a really cool evening, bringing tunes and more vibes with everyone being more than happy to let their hair down after two hours of standing around. A little hitch that some people just arriving for the after party found was that the coat check was full, which obviously wasn’t ideal but there were plenty of crevices to stuff a coat somewhere.

Overall, the night was one to remember and I appreciated that climate change was at the forefront of everybody’s mind for the evening, which isn’t usually associated with fast fashion.

Was the night worth the steep price tag? For those who are willing to pay definitely yes and I would love to see what DONT WALK have in store for next year.