Food thieves are the worst people at uni

So there you are. A group of freshers newly moved in together. More or less settling in. More or less getting on. Sure, there’s the guy with the thrash metal and the girl with the phobias, but no-one who you actively dislike.

No one you think you would mind spending a year with. After all, you’re all adults, all mature. You’re sure that whatever problems that arise can be worked through sensibly.

Then someone’s sandwhich goes missing and all hell breaks loose. 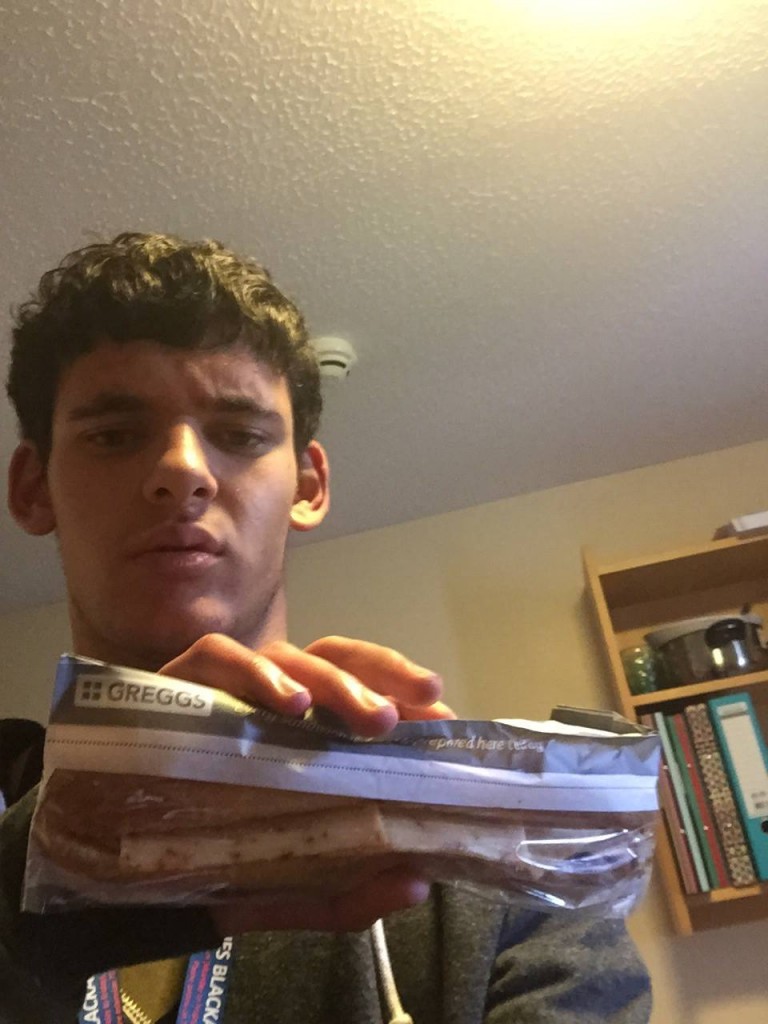 This is MY sandwich

People are generally pretty decent. They basically want to believe that other people are pretty decent. So when the first few morsels go missing, you might be inclined to ignore it. After all, the fact that you’re using a communal fridge at all means you have a certain element of trust in the goodwill of others.

Food thieves, however, are by definition, complete bastards. So trusting the goodwill of said bastards and keeping quiet generally doesn’t stop them. On the contrary, it probably counts to their distorted minds as being given permission. So, they grow in confidence. The thefts stack up. Fruit. Cereal. Steak bake. Three quarters of someones birthday cake (you knew evil existed, but this? This??).

That patience? That trust in goodwill? Tends not to last long at the sight of an empty fridge.

I can really see this working

There is a problem. People start throwing suspicious glances at one another. You start to wonder who you can trust.

The Facebook group which your floor set up at the start of the semester, used once and then forgot about, is suddenly flooded with posts about stolen items, ranging from the whiny to the passive-aggressive to the positively raging.

While obviously this feels better than just hoping Food Stealing Bastard will grow a conscience and stop, its just as ineffective. While a normal person who sees that they’re causing upset, generally speaking, then tries to stop, it’s not enough to make a food thief reconsider.

Hell, for all I know, they might even enjoy it. Hiding anonymously in the figurative shadows, playing games with peoples heads by taking their food. There was definitely food in here before

Paranoia sets in. A siege mentality develops. An angry kitchen meeting is called.

You stop trying to suss out who it is through conventional means, and turn to darker arts.

You forget about identification, and turn to punishment instead. But you can’t agree on that either. There’s serious talk from some people about putting laxative in whatever you think the bastard is likely to take, but after a moments shock from the rest of the table that this could even be considered, common sense prevails and the idea is dropped.

After all, why use laxatives when you can have rat poison? What’s the price of civilisation? A stolen onion bhaji, apparently.

Lord of the Flies is suddenly starting to appear a touch optimistic.

After no-one manages to put into action a masterplan to stop the villain in your midst, and Food Stealing Bastard continues to elude you, resignation sets in.

People start to accept Food Stealing Bastard as an unnavoidable fact of life, like rain or Coldplay.

Something you can bitch about, but don’t have much chance of really stopping. 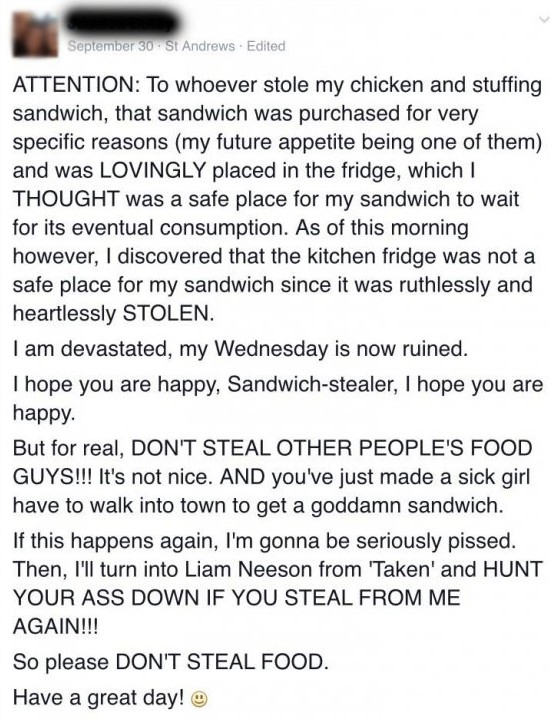 The Facebook comments go from warnings “nevar 2 steel ma Cookie Crissp again”, to helpless bitching. You reluctantly return the joint fund you were hoping to use for the rat poison, and instead everyone signs an angry open letter which you place in the kitchen.

That’ll show them. Except it won’t, because a leopard cannot change it’s spots, no matter how many angry open letters are addressed to them. Hell, they’ll probably sign it themselves. For shame.

The Food Stealing Bastard is more than just a bastard who steals food.

It’s hard really to say anything else, maybe it’s best just to treat these people with the contempt they deserve. It could even be that this reaction actually encourages them – there’s no one I’ve met so far at uni broke enough that they need to steal from others to keep from starving, so maybe it is all about the attention.

Maybe it’s all a cry for help, a way of answering a deep-seated need for affirmation. Maybe they just can’t help themselves.

So, then, maybe the solution is not to talk about food-thieves, but to ignore them. With that in mind, let me address my last words to whoever it is who took my tuna sandwich. If you happen to be reading this, and you take nothing else from this article, just remember this:

You’re an asshole. Stop it.