Salomé Reviewed: Worth All of the Hype

For weeks, the intrigue around Tyler Anderson’s production for the Mermaid Performing-Arts Fund has gradually increased, with provocative pictures of the media sweetheart Kim Kardashian (better known throughout St Andrews as Kim Ké) posted around the town, captioned with Oscar Wilde’s famous lines. Salome promised a mysterious glamour and sexuality that is rare to find within student theatre.

Salomé would better be described as an experience rather than a play. For weeks, the intrigue around Tyler Anderson’s production for the Mermaid Performing Arts Fund has gradually increased, with provocative pictures of the media sweetheart Kim Kardashian (better known throughout St Andrews as Kim Ké) posted around the town, captioned with Oscar Wilde’s famous lines. Salomé promised a mysterious glamour and sexuality that is rare to find within student theatre. Perhaps even more seductive was the uniqueness that surrounded the production. This was not going to be just another theatre piece where a student performs a monologue in front of a black background. Salomé attempted to go where previous shows had feared to tread, and this risk certainly paid off.

The Byre Studio was the picture of opulence that we had been promised. A table covered in wilted flower blossom, scattered across torn and crumbled crimson cloth, and adorned with intricate bejewelled purple wine glasses and silver plated bananas lay in the centre; while a pale Jerusalem moon cast its light onto the audience. The scene perfectly embodied the juxtaposition of royal glamour and humble Biblical messages that is at the centre of Oscar Wilde’s most controversial play. The play documents the story of John the Baptist through the perspective of the beautiful Princess Salomé, daughter of King Herod, Tetrarch of Judæa and her role in the downfall of the famous Biblical figure. The one-act tragedy is an unusual form, but one that works perfectly in this theatrical context. 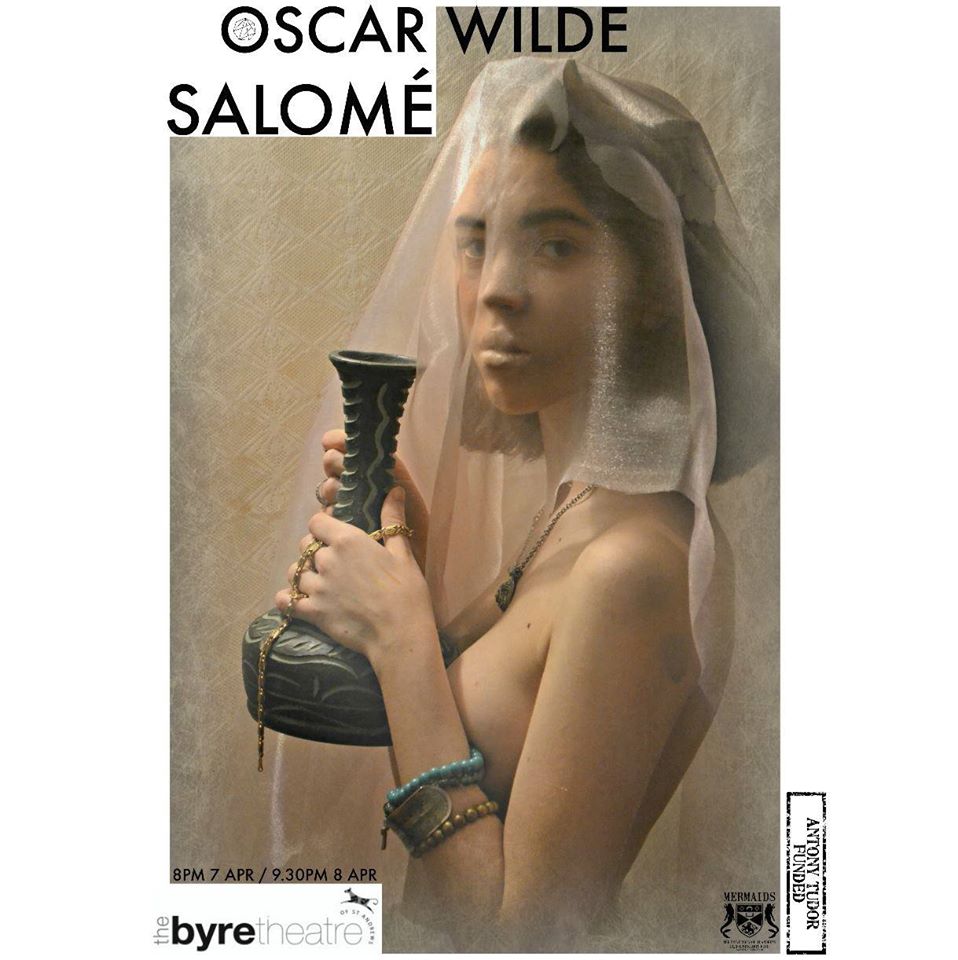 Princess Salomé, portrayed with excellence by Jemima Tyssen Smith, is a beautiful and wealthy young woman whose sexuality is so astute that it is feared by her court. It is rare to see such a sexually empowered female character, and even rarer to see one who openly uses her sexuality to get what she wants. The comparisons between Salomé and Kim Kardashian are used by the cast to highlight the shaming of powerful women who are aware of their sexuality. It occurred in ancient Judæa and is still very prevalent in today’s culture. Tyssen Smith’s portrays Salomé as a young woman who is simultaneously naive and incredibly astute, wrapping her all-powerful father-in-law around her fingertips. She plays off the contradictions in her character to create a character that is aloof in stature yet incredibly relatable in a modern day context. Her performance was captivating and incredibly worthy of note. Ben Glaister also shines as Herod Antipas, Tetrarch of Judæa. His performance is possibly the most moving of the show, ranging from sleazy desire for his daughter-in-law to bitter vengeance to sheer desperation in the face of Salomé’s sexual assertion. Marianna Accorti was also a commanding presence as Herodias, his wife, and the sarcastic and sneering wit she brought to the character was expertly pulled off.

The play was expertly acted, but in my opinion, the most impressive aspects of Salomé were costume and dance. The visuals of this play were nothing short of breath-taking, especially when viewed through the haze of the strobe lights. One of Salomé’s servants (who were played by Shari Sharpe, Ilyana Bell and Alex Campbell-Moffat) transformed from mysterious temptress to stunning angel (or was it a bird of paradise?) through impressive dance skill. The dance of the seven veils, performed by Salomé herself, brought the play to a climactic point of intense, almost evasive, visual beauty that stunned and entranced the audience. Tyler Anderson and producer Alexandra Blitziotis deserve all the praise that will undoubtedly come their way for creating such a rich and glamorous visual spectacle.

Salomé was a beautiful exhibition that should be treated as a work of art rather than a play. The vivid combination of incredible costumes, powerful acting and unique visuals has resulted in a piece of theatre unlike anything I have experienced before. Huge congratulations go to the cast and crew.