Crave is aptly described as a “difficult play,” by its director, Joanna Bowman. Crave was definitely one of the more unusual productions I have seen. At the end of the 40 minute performance, I (and I believe most others) were left extremely confused. But, according to Joanna, that was the intended outcome. In that sense, the play was a success.

The preset four cast members were dressed in dark, non-descript clothing and sat around a table. The single lights in front of each of them were just one hint that this play was going to be out of the ordinary. The aesthetics added to the overall curious vibe that the audience emanated, buzzing before the performance. Whilst the play began with the usual dimming of lights, it soon departed from expectations – a solid chunk of the dialogue was spoken in darkness. In this section, lines overlapped one another almost seamlessly – though a few were hard to hear. 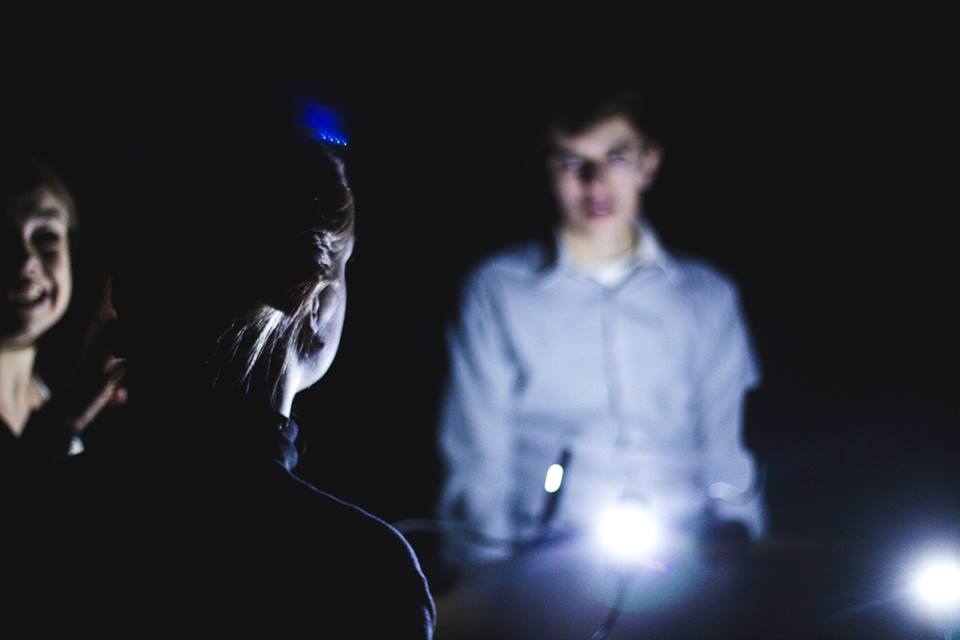 It was hard to know whether or not you were missing integral phrases though, as they all jumbled together to create two story lines. Dark subjects such as mental illness, rape, and incest were all either alluded to or mentioned outright throughout the show. Seemingly, the two sides of both stories were delivered and we were meant to listen and decide what really happened. Or did not happen. All of this should be read (even though I didn’t punctuate it as such) with many question marks and taken with an entire handful of salt because, like I said, I was (and still am) absolutely confused.

Nevertheless, the performance was as confusing as the script was intended to be. What was not confusing was the talent of the production team and cast. Their ability to convey such a range of emotion and blindly feed off of each other should be commended. Each of them performed strongly and painted vivid pictures, using mostly their voices (and, eventually facial expressions as well).

Lighting was used well in this play with each character eventually illuminating themselves by turning on their personal lamps. This I understood was to add greater meaning, but probably would have appreciated more had I understood what that actual meaning was supposed to be. Nevertheless, the lights that intensified gradually to an almost painful stance bringing about the ending of the play were a very cool touch.

All in all, the play was fascinating. I lamented the end because it lacked clarity. However, clarity or not, Joanna Bowman and her team along with the cast: Sarah Pollock, Bernie Munro, Angus Russell, and Emma Taylor should be praised for their creativity and talent. What must be remembered, above all, is that Crave is a difficult play about extremely difficult subjects. I guess you could say I was craving more.