Moyes has come under inevitable scrutiny and criticism for United’s below-par start to the season. That said, United were only 7 points better off this time last year under Ferguson. This year’s Premier League is more competitive, Moyes is just settling in, and United’s players are ageing. Ferdinand is 35, Vidic, Carrick and Evra are all 32 – these are players who represent the core of Manchester United, and whilst they are not quite yet on the Giggs scale, one could argue that their best playing days are certainly behind them. Therefore, it could be argued that Moyes is not doing a bad job at all.

However, some decisions have particularly irked United supporters; namely, the continued selection of Valencia, Nani and Young in favour of pre season star Wilfried Zaha, the highly rated Shinji Kagawa, and the man of many nationalities Adnan Januzaj.

But is there method in this apparent madness?

In 2008, Ashley Young was compared by the sagacious Martin O’Neill to Lionel Messi and Cristiano Ronaldo. A hyperbolic claim, to say the least – but one which exemplifies the potential quality that the starlet showed during his early years. Unfortunately, his tumble against Sociedad mirrored the dip in form which has led many to question his ability to perform at a top level club like Manchester United.

But let’s not forget that just two short seasons ago, Ashley Young scored two screamers against Arsenal in an 8-2 drubbing, and was lauded as England’s best hope in Euro 2012 in the temporary absence of talisman Rooney. In 2011, Nani was nominated for the prestigious Ballon d’Or and in the very same season, Valencia was voted fans’ and players’ player of the year. 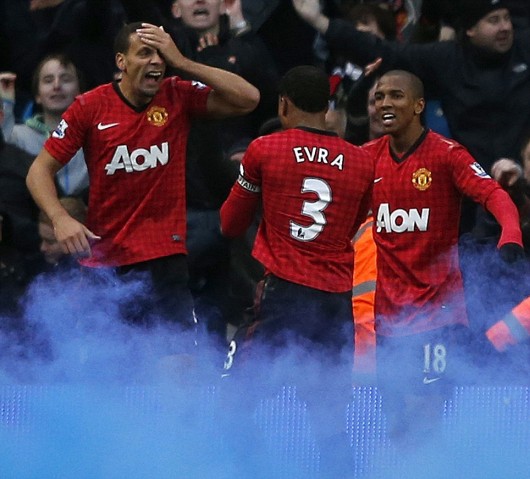 These players may not be hitting those same heights this year, but they have certainly proved that they are capable of it. It is Moyes’ job to coax their best form back out of them, and he can’t do that if he refuses to play them.

At the moment, Moyes’ rotation system is allowing most of his players a reasonable amount of game time, which is permitting Januzaj and Kagawa to continually improve, whilst giving Young, Nani and Valencia the opportunity to regain form. Although Zaha hasn’t yet featured enough to stake his claim for a more permanent role, Moyes has shown that he is more than open to accepting a loan deal to aid Zaha’s development, proving that not only is Moyes focusing on the present, but he also has an eye to the future.

United’s young stars may be promising, but to give them permanent roles in the first team would be an audacious step for the new manager, despite the stagnation in the form of the regular wingers.

It is easy for United fans to look upon Ferguson’s reign through rose-tinted glasses. And there is no doubt that Ferguson was an excellent manager. But even he made errors. Eric Djemba-Djemba, anyone?

I feel like that puts the Fellaini move into perspective…

So, United fans, I beseech you, give Moyes time. You will not agree with every decision he makes, nor will every decision he makes be the correct one. However, he is a highly respected manager who needs to be given time to remould an ageing squad. There is, as far as I can see, a certain method in the apparent madness.