On Tuesday evening, an enormous wave struck and capsized the rowing boat carrying St Andrews fourth year, Tom Sauer and his rowing partner Tom Fancett. The pair were 8 days into […]

On Tuesday evening, an enormous wave struck and capsized the rowing boat carrying St Andrews fourth year, Tom Sauer and his rowing partner Tom Fancett. The pair were 8 days into their trans-Atlantic expedition and 500 miles away from the Canary Islands.

Describing the moment when the wave struck Sauer said:

“Tom got out from the cabin, as I climbed in. We encouraged each other as usual for the shift that lay ahead. I turned to look at the GPS to see the milage I had rowed in the last 2 hours, as Tom put his leash on. Just as I went for the cabin hatch handle, Tom shouted, “Shit Shit Shit” and a wall of water hit us, capsizing us immediately and flooding the Cabin.” 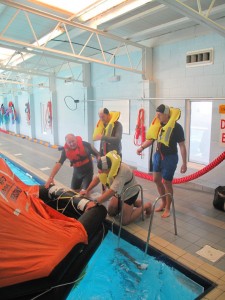 The pair then managed to inflate a life raft, set off a beacon and take it in turns throughout the night to keep a look out for ships. At around 05:20, Fancett spotted a cruise liner and set off a flare. Although the ship spotted the raft, rough seas made it impossible to launch a rescue vessel so T2 went through the terrifying ordeal of having the Crystal Cruise Liner attempt to edge along side them. Once safely on board, messages were sent out to family and friends letting them know that they were safe.

The adventurers began the trek of a lifetime on December 4th. They were one of 17 teams competing in the Talisker Whiskey Atlantic Challenge. Their goal was to complete the 3000 mile journey from the Canary Islands to Barbados in less than 60 days.

After their rescue, the men sent out a message saying, “we are obviously very disappointed but in the first place, happy to be alive and very grateful to our rescuers.”