The Men’s Golf Club’s fortnight of golfing fun began with a certain individual getting comprehensively lost attempting to walk – yes, I know, walk – between terminals in Charles de […]

The Men’s Golf Club’s fortnight of golfing fun began with a certain individual getting comprehensively lost attempting to walk – yes, I know, walk – between terminals in Charles de Gaulle airport. I’m not entirely sure why I chose this method, or how funny the AU would have found it if I had arrived 15 minutes late for the plane only to watch it take-off without me. But, it all ended well thanks in full, to the kindness/anger of a bearded French attendant watching my good self wandering aimlessly around an area I was clearly not supposed to be in (the sniffer dogs may been a clue to this). Still, it’s one to tell the grandkids.

Our first competition was the 2nd European Universities Golf Championships.  This was a 72-hole stroke-play event held at the Golf Course Otecec in Slovenia. Being the third most forested country in Europe, it was perhaps unsurprising that the course was very densely tree-lined, almost Pine Valley-esque, which didn’t bode well for us Old Course specialists, used to getting away with sprayed drivers onto parallel fairways. The layout was extremely undulating, with lush, parkland greens: in essence, you couldn’t find a more different golf course to those found back on the St Andrews links. 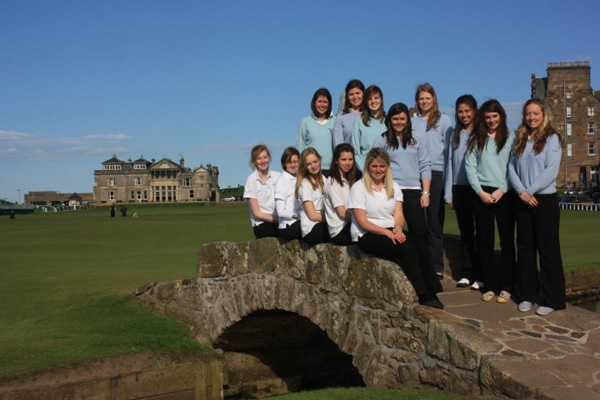 With this in mind, we actually performed quite well. Many of us struggled on the first day, having only played one practice round on the slow greens, but there were some notably stronger performances later on in the week. In the men’s individual standings, I somehow managed a final round 69 to tie for 9th place, and Club Captain Matthew Wheeler recovered admirably with final rounds of 69 and 70 to finish 11th. In the team standings, our poor opening rounds cost us dear, and we finished 6th, with only 4 shots separating us from WG Darmstadt in 4th place. In the girl’s competition, Mikaela Nordblad came a very creditable 3rd in the individual standings, and Ashley Smith was 6th. Our A team finished second, and the B team fourth, both displays to be proud of against tough opposition. Many thanks should also go to John Maguire for his caddying skills with the girls, and his knowledge and insight into Slovenian lager.

Myself, Matthew and Ashley were then whisked off to the airport once more, and after 10 hours of average films, bad sleep and terrible Canadian chat, we arrived with the other St Andrews entourage in Johannesburg. We were playing in the Chancellor’s Trophy, an exciting new match-play competition against the TUKS Sports Academy at the University of Pretoria. Pretoria Country Club was chosen as the venue, an inland links-style course with firm fairways, fast greens, and deep, penal bunkering. Compared to the Slovenian layout, it provided a sense of comfort that the golf played would be similar to that back in Scotland, and we were all confident of giving the South Africans a good match.

The first day’s play, a four-ball better-ball format, was, however, simply a lesson in golf. Freddie Edmunds and Wheeler came up against two supreme ball-strikers – one of which I’m still convinced is related to Alvaro Quiros – who knocked it round in 60, 12 under par; our boys arrived back in the clubhouse utterly shell-shocked, having shot 65 themselves, yet still comfortably beaten. This set the tone for the week. I personally struggled with the altitude, and couldn’t get a handle on how much further the ball was travelling through the thinner air. We went into the last day comfortably down, but myself, Cole Sedgwick and Gemma Bradbury all recorded confidence boosting singles wins, and although losing the overall match, we won the final singles day, which gave our loss a sheen of respectability. 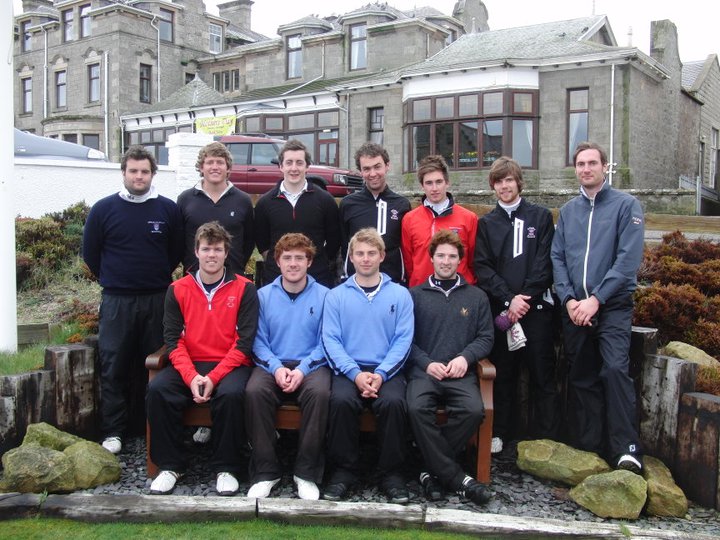 Aside from the golf, we were treated unbelievably well by our hosts. The evening banquets were incredibly generous, and the night out in Pretoria Square to celebrate Werner’s 21st birthday will live long in my memory… well, the start of it. It was this social element to the trip that made it so rewarding, with both teams competing hard on the golf course, yet remaining good friends after they inevitably beat us! The TUKS Academy will be coming over to St Andrews next summer for the second installment of the Chancellor’s, and the trip has given us all a definite incentive to work hard on our games in an effort to give them a taste of their own medicine next time round.

Finally, a huge thank you should go to both Debby Sargent and Steven Stewart for organizing the two trips, both of which were incredible experiences. All involved had an amazing time, and we are all so grateful for the work they have put in behind the scenes.