Saints victorious in double volleyball win over University of Glasgow

Sunday saw the Men’s 1st team take on a recently relegated University of Glasgow team. A shaky start in the first set from the St Andrews side saw the passing unit under pressure from two tough Glasgow jump serves. Despite some strong hitting from Felix Gerhardinger on the wing, St Andrews lost the set by a narrow point margin. 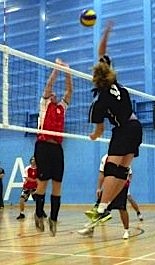 The second set saw a newly invigorated Saints side serve a strong run of points through middle hitter Callum Stewart, which exposed a weakness in Glasgow’s passing ability. The Saints were able to capitalise on this and began to utilise some power plays with Gerhardinger and Stewart managing to find the floor around the beleaguered Glasgow players’ feet repeatedly. This gave St Andrews significant momentum, which combined with consistent, aggressive blocking from Fresher middle Ben Newman, saw them sail through the set convincingly.

The third set started in a similar fashion, with St Andrews clearly maintaining the momentum gained in the previous set. With Lei Fang taking control of the game tempo at the net, St Andrews were able to fully utilize their range of offensive options and bring opposite hitter Callum Moir and first year swing hitter Kevin Dibb fully into the game. St Andrews were able to increase their lead to 2-1 in sets.

Glasgow fought hard in the third set, with their captain causing some problems for the St Andrews’ block. Libero King Chung stepped up to prove more than a match for him, making a couple of great defensive plays and allowing St Andrews to gain an all important lead around the middle of the set. With Matt Shaw coming on to reinforce the right-side block and the passing unit, he saw out the set and helped St Andrews achieve the final score of 3-1. Overall, a solid performance from the Saints saw them raise their game to the highest level seen this season so far!

The St Andrews Women’s 1st team played their second match of the season against the Glasgow Women’s 1st team on Sunday. The Saints were hungry for a win as they pulled into Glasgow. “The girls were all looking so good in practice”, said coach Shelly Paterson, confident that the game would end in a Saints victory. Coach Paterson was correct, as the Saints handily took Glasgow in three sets to win the match 3-0. 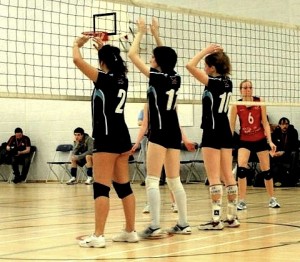 But the St Andrews women started the first set on unsure footing. Last-minute rotational changes forced the St Andrews players to adjust quickly in defending Glasgow’s attacks. Though the Saints dropped a few early points to Glasgow attacks, the game soon settled into a steady back-and-forth. At 16-10, the Saints took control of the match pace. Quick attacks by middle Carly McKinlay found the weaknesses in Glasgow’s back court, while the Glasgow blockers failed to stuff McKinlay. A strategic St Andrews continued to exploit the holes in the Glasgow defense to clinch the first set, 25-17.

The Saints found their groove in the second set. A strong defense and steady stream of offensive attacks led St Andrews to an early lead. A devastating mid-game serving run by off-setter Emma Fox widened the lead to a 18-7.  A late timeout from the Glasgow bench wasn’t enough to change set outcome, and the Saints went on to win the set with a resounding 25-8 finish. 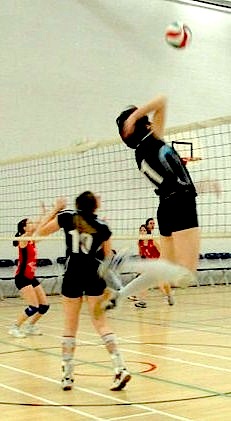 Deadly serving by setter Indre Semogas gave St Andrews an early lead in the third set. A strong St Andrews block forced Glasgow to abandoned spike attacks and tip the ball over the net. Libero Lorena Tussis used her cat-like reflexes to pick up every ball Glasgow could throw at her in the back row. At 21-9, Glasgow stepped up their game. After some excellent match play, power hitter Maria-Christina Marchi, coming off of a pre-season ankle injury, delivered two crushing kills to clinch the set and the match. The Saints ended the third set victorious at 25-12.

The lady Saints were pleased with the result and are anticipating a successful season in Scottish Div 1A and BUCS Trophy playoffs, coming off of their BUCS Trophy win last year. The Women 1st team will be next playing Aberdeen University in Aberdeen on Oct. 30th.