Created solely from the words of Queen Elizabeth, this one woman play attempted to reconcile history and entertainment in order to ‘reveal the woman behind the queen’… I’ll be honest, […]

Created solely from the words of Queen Elizabeth, this one woman play attempted to reconcile history and entertainment in order to ‘reveal the woman behind the queen’… I’ll be honest, I wish it hadn’t.

The play focused on the main issues of Elizabeth’s life: marriage, smallpox, Mary Queen of Scots, religion and everything in between, including her great affection for a stable boy named Robbie. Unfortunately, this meant there was no time to absorb anything that was said, as Rebecca Vaughan – who played the Queen – seemed intent on hurtling through these events at breakneck speed, indicating that she was perhaps more concerned with remembering her hour-long monologue than she was on making the audience understand and engage with Elizabeth as a person.  Moreover Vaughan’s delivery of this monologue was hindered by the cyclical nature of her speech. 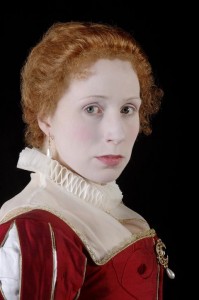 As she begun a new subject Vaughan’s voice would drop an octave and slow down, only to increase in pitch, volume, and speed as she reached the climax of yet another harrowing moment in her desperate and miserable life. If this was Vaughan’s attempt to present ‘the woman behind the Queen’ then all I can infer is that Elizabeth was the ultimate stereotype of a hysterical woman going through early menopause. The increase in pitch and speed also rendered the climax of her speeches inaudible, and this – combined with the Elizabethan English in which the entire play was performed – made the script incomprehensible. Vaughan’s delivery was not helped by her fear of directing her voice to the audience instead of the floor, although we were repeatedly told that we were ‘her loyal subjects’ whom she cared about dearly – actions speak louder than words, Lizzie.

To be fair, Vaughan did seem to grasp the power of actions to some extent, as her physicality – although she spent most of her time sitting in a ‘throne’ – was good. Her use of hand and facial gestures for emphasis were perhaps the only thing that kept the play going.

It is possible that Guy Masterson was aware of this need for momentum in the play. He insisted on interjecting every so often an awkward zapping sound – the point of which I could not could not understand, other than it stopped Vaughan talking for a few seconds. Every time this sound occurred Vaughan reacted in a different way, suggesting she had no real idea of what was going on either.

As for the set, Masterson went for the minimalistic approach of a chequered black and white floor and three red tapestries behind. The stage was blindingly lit almost throughout, jarring with the floor. At times, I wondered if this was an attempt to make the audience empathise with the troubled mind of Elizabeth. But, really, this empathy should have been conveyed through the acting and not through inducing a headache.  Given that make-up artist had decided to go for the authentic look of a pasty white face, the red of the tapestries and of Vaughan’s dress drowned her out completely, often giving the impression that one was watching a headless body float around the stage. Perhaps Vaughan would not have had to be so screechy if she was certain the audience knew she was there…

Overall, I, Elizabeth was the sort of show that if a woman had come into your class at elementary school and performed it you might have found it fun, but paying a whole £8 to sit through this was the biggest regret of my life (I’m being melodramatic; my biggest regret was not taking advantage of the heavily discounted chocolate when I went to Cadbury world). Unfortunately for any readers who would like to rebuff this review, the play was only at the Byre for one night, but my recommendation is that if you ever get the chance to see this play onstage in your life, go to Cadbury world instead.