We’re better than this

The zoo is part of the bi-annual Stress Less Fest and is an opportunity for students to “relax and de-stress away from [their] studies”.

The animals range from cute, fluffy favourites like rabbits and sheep, to those that are slightly harder to stroke, like turkeys.

While students line up in their thousands to take pictures clutching a cute bunny or petting a piglet, seemingly little thought goes into the general welfare of these animals: it is simply assumed by most that the animals are “used to it”, or even that they “probably had a good time”.

One student said she left the petting zoo soon after arriving, having being made to feel uncomfortable as the animals “all looked sad”.

Another, who claimed she was “not an animal sympathiser”, said “the amount of people there” made it a disturbing scene, adding: “these animals are being picked up constantly. It’s just not fair.” 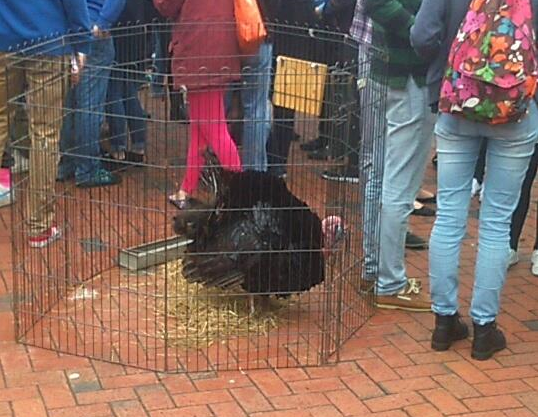 Marcie, a student nurse, and volunteer for a small animal charity, said: “I was horrified to see distressed small animals constantly passed around and a guinea pig thrown up in the air.”

After years of silence, those who believe the petting zoo is cruel are starting to become more vocal about their concerns.

Connie May, Treasurer of the RSPCA Society told the Tab: “Petting zoos are a cruel way to ‘reduce’ student’s stress.

“The short time we spend with the animals on campus may feel like a short term stress reliever for us, but do we consider the stress these animals go through when they are forced into trucks with other animals they wouldn’t naturally mix with and go through long journeys only to be put into small pens on cold concrete and endlessly poked by large crowds of loud students?

“I think there are many more fair ways to reduce stress such as days out to the new forest where we can be around animals in their natural environment and where the animals get to choose whether or not they want to be hassled.

“We dont really see it at first but when you look into these things you realise how selfish we are as humans. Using animals for entertainment is unfair and unnecessary.

“People need to look more into the transportation (many animals get dehydrated and scared), fear of large crowds, loneliness, being in unnatural environments etc.” 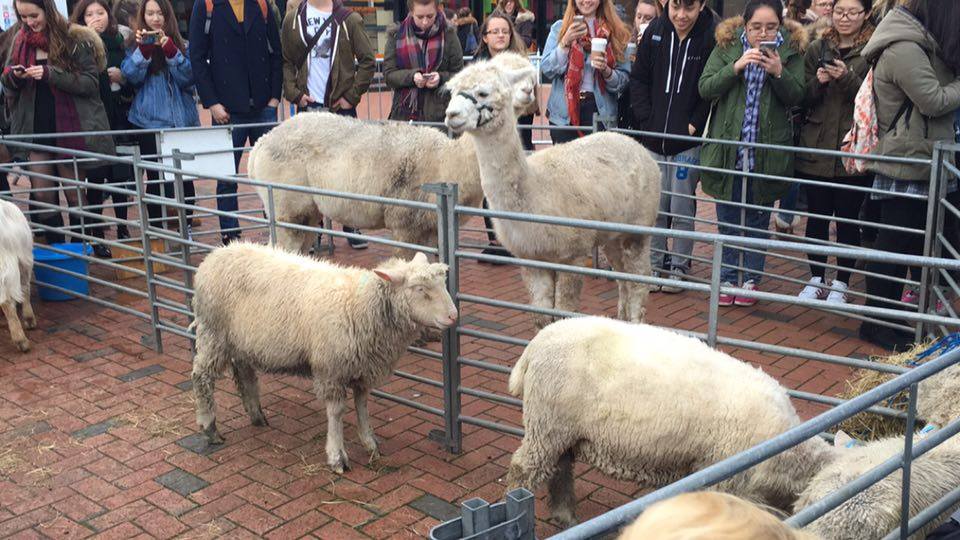 Many within the student body, however, still don’t see any problem with the event.

Cameron Meldrum, president of the Young Greens, said: “As far as I’m aware the welfare of the animals has been taken into account and taken seriously. The company is a local family-owned business, so personally I don’t see a problem with it.”

While the assumption of welfare is a foregone conclusion for most, can anyone say that simply meeting minimal standards for animal welfare is really good enough?

Should students be tacitly and actively condoning the mistreatment of animals in aggressive and stressful circumstances just for the sake of unwinding? Many would argue the use of animals for human entertainment at all is cruelty, regardless of whether they are kept in good conditions.

One petting zoo supporter gave an unsolicited argument in favour of the view on Twitter late last night. Among a few more savoury epithets, he contended: “when lamas (sic) start going to universities I’ll respect them. They’re inferior creatures.”

He went on to argue that “if they have a problem they should engineer electrical cars”- a joke, certainly, but one showing the fundamental lack of respect towards animals at the heart of some who see no issue with petting zoos like these.

the petting zoo on @YourSUSU campus today is kind of horrid, this turkey dude was really distressed 🙁 pic.twitter.com/vOGftpQg

VP Welfare and event organiser Sam Bailey said: “We had brilliant feedback from students about the petting zoo, but will always listen to and take into consideration all viewpoints whether for or against the event.

“The animals are well cared for by dedicated staff who look after the animals both at their home farm and whilst visiting places around Hampshire – they know what they are doing and I’m fully confident that they are the best people we can be guided by when it comes to welfare issues.”

Clearly, if the petting zoo was to be deemed “cruel” by students as a whole, SUSU would not be at fault, given their moderate consideration for animal welfare in the organisation, and the element of tradition surrounding the event.

However, there remains a clear suggestion from many that, good welfare or not, many are simply uncomfortable with the presence of a zoo on campus.