Many students are secretly turning to sex work, and probably more than you would expect. They often keep it a secret due to fears of being judged by family and friends, and also because of the negative stigma toward sex work. Yet, it has become increasingly common for students in the UK in particular. Sex work can be anything from prostitution to escorting or stripping. It has also grown going on dates with sugar daddies or mummies, and also the growth of what is commonly known as being a “webcam model” for paying customers online.

I spoke to a 20 year old student at Royal Holloway, who prefers to remain unnamed, about her experience with sex work. She chooses to do this as it is a convenient and quick way for her to make money, and believes it is her body and therefore her right to do so.

Despite women being able to be more and more sexually open in society, there still remains this sense of judgement amongst some. As soon as the term sex work is heard, people instantly assume "oh no, poor girl" when it can often be their own personal choice. They are not always victims.

“Being young means that with most jobs you start from the bottom. But with sex work, it’s a level playing field – probably even biased towards young people.” 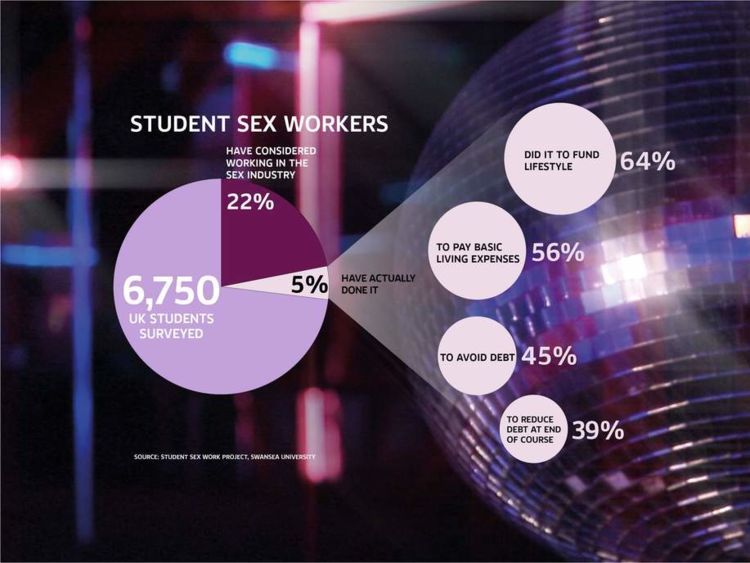 “A guy with dwarfism came online and asked if I liked ‘laughing at midgets’. I replied yes, assuming this is the answer he was looking for. He then proceeded to dance on camera for me, butt naked. Full on wind milling. Was by far my best cam experience.”

"I've also had a guy ask if he can pay to watch me take a shit."

"I think the stigma against is really harmful because it means that since everyone is so secretive about it, it's much easier to be underpaid and taken advantage of."

She believes that having this stigma against sex workers is harmful and aims to change this point of view. People tend to focus on the people who are doing the sex work, rather than questioning those who actually seek it, with many of the customers of this individual being married men. Isn't this more worth considering than judging those who do it?

The number of sex workers in the UK is estimated to be about 72,800, and they experience high levels of sexual violence and assault. Sex workers have a 45-75% chance of experiencing sexual assault in their lives. When comparing this with Amsterdam, where sex work and prostitution is widely accepted, these numbers are incredibly high.

With the recent further increase of tuition fees bringing the yearly tuition fee sum to £9,250, the pressure of impending debt is a rising issue for students in the UK and is extremely overwhelming. And unfortunately, not everyone has parents who can afford to pay their rent and fund their slightly concerning Krispy Kreme addiction. So, what do you do if your student loans don't cover living costs?

Sex work offers students the ability to work on their own terms. It offers good pay in comparison to the typical zero hours contract or minimum wage job that takes up more time and doesn’t entirely cover living costs. Why wouldn’t this become a growing interest to struggling underfunded students? That’s enough to make anyone consider it. Even you, don’t lie.