Girls, you know how it feels

We’ve all been there. Sat, making small talk with a boy who’s a 7/10 at a push, thinking "how did I get myself into this?" First dates can be awkward, especially when the person sat opposite you is beaming because they think it’s going so well and they couldn’t be further from the truth.

But today a blind date between two Newcastle Uni students has gone viral, after the students involved had completely different perspectives as to how the evening went. The short but (not so) sweet love story of Sophia and Danny is a typical disaster date where the boy is completely unaware just to how much the girl isn't enjoying it. The details of the date were tweeted, and Danny's cluelessness went viral for all to see. The tweet has been favourited over 21,000 times.

So Newcastle Uni's student paper does a 'blind date' section and I thought from the guy's POV that it wasn't a good date but it wasn't terrible, then I read the girl's POV and yikes pic.twitter.com/uw7bYL4lA2

So where did it all go so wrong?

For Sophia the date started out okay. She was set up by the SU’s student paper who regularly arrange blind dates and write articles on it – fun for those involved and the people who get to read it. She headed to 97 & Social in Jesmond for a drink and a bite to eat with Danny, also studying at Newcastle. Although she didn’t know what to expect, she was laid back about the situation, having friends who’d done the same before her.

Upon arrival, she said she "didn’t seem attracted" to Danny, but he was "friendly" – not the worst-case scenario to be in – at least maybe a friendship may be formed?! But after a drink, it became clear they had very little in common. After they moved inside, Danny began to talk about his beliefs of a "traditional" life – wife, job and kids – borrrriiiing!

But his views got more and more offensive when he revealed he was a Tory (*eye-roll emoji*), and then an anti-feminist, calling the movement "toxic" and claiming girls called themselves feminists to be able to act like "slags" – I’m not sure about you but I can’t believe men like this still exist. 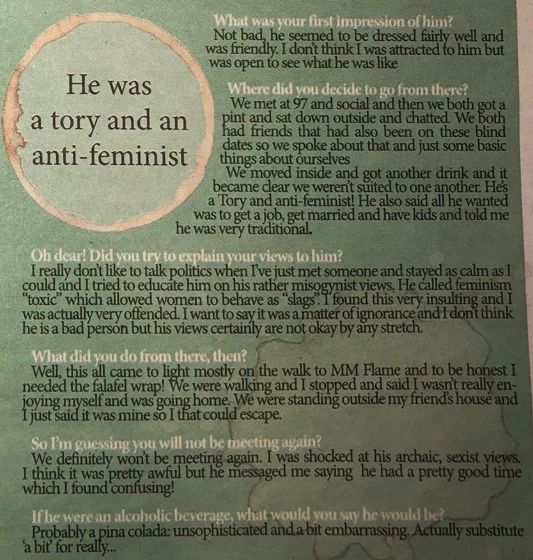 What Danny saw as an interest in politics and a "good conversation", Sophia saw as a big no no. But, she tried to no avail to change his misogynistic views, leaving her tired, moody and just wanting her wrap from the local takeaway – again, a feeling we’ve all had many a time. She said: "We were walking and I stopped and said I wasn't really enjoying myself and was going home. We were standing outside my friend's house and I just said it was mine so I could escape."

But Danny didn't pick up on this, telling The Courier: "We were both interested in politics so we started talking about it and found that we had quite different views. I think the fact that we were both into politics meant that we talked about it but it was more of a discussion than clashing." He previously added he felt they had "a good chat".

So, whilst in his interview, Danny somehow still manages to portray the date in a somewhat positive light, after reading Sophia’s angle, it seems that boys really can be deluded. The story ends in the perfect way, a text sent from Danny to Sophia saying he had a"great time" – I think they can agree to disagree on this one.