Two protests have taken place this afternoon at The University of Manchester's Whitworth Arch, to coincide with the University's senate meeting taking place nearby.

A protest organised by the Take Action! UoM group demanded that students are compensated financially for the major disruption caused by the recent UCU strike action.

Equipped with placards, banners, and megaphones, chants of "Nancy, Nancy, we demand transparency!" and "Nancy, Nancy, justify your salary!" reverberated around the University's Old Quad.

The chants were directed at UoM Vice Chancellor Dame Nancy Rothwell, who was attending a University Senate meeting alongside heads of school and other senior academic staff in the adjacent Whitworth building.

Following the protest, Take Action! UoM campaigner, Dorian Loetzer, told The Tab: "We found it important to make some noise outside of the University Senate meeting.

"A lot of the senior management team is present and we've made sure they know that this is an issue that is important to the student body.

"We've made our position clear and lobbied peacefully so, by all accounts, the protest was a success." 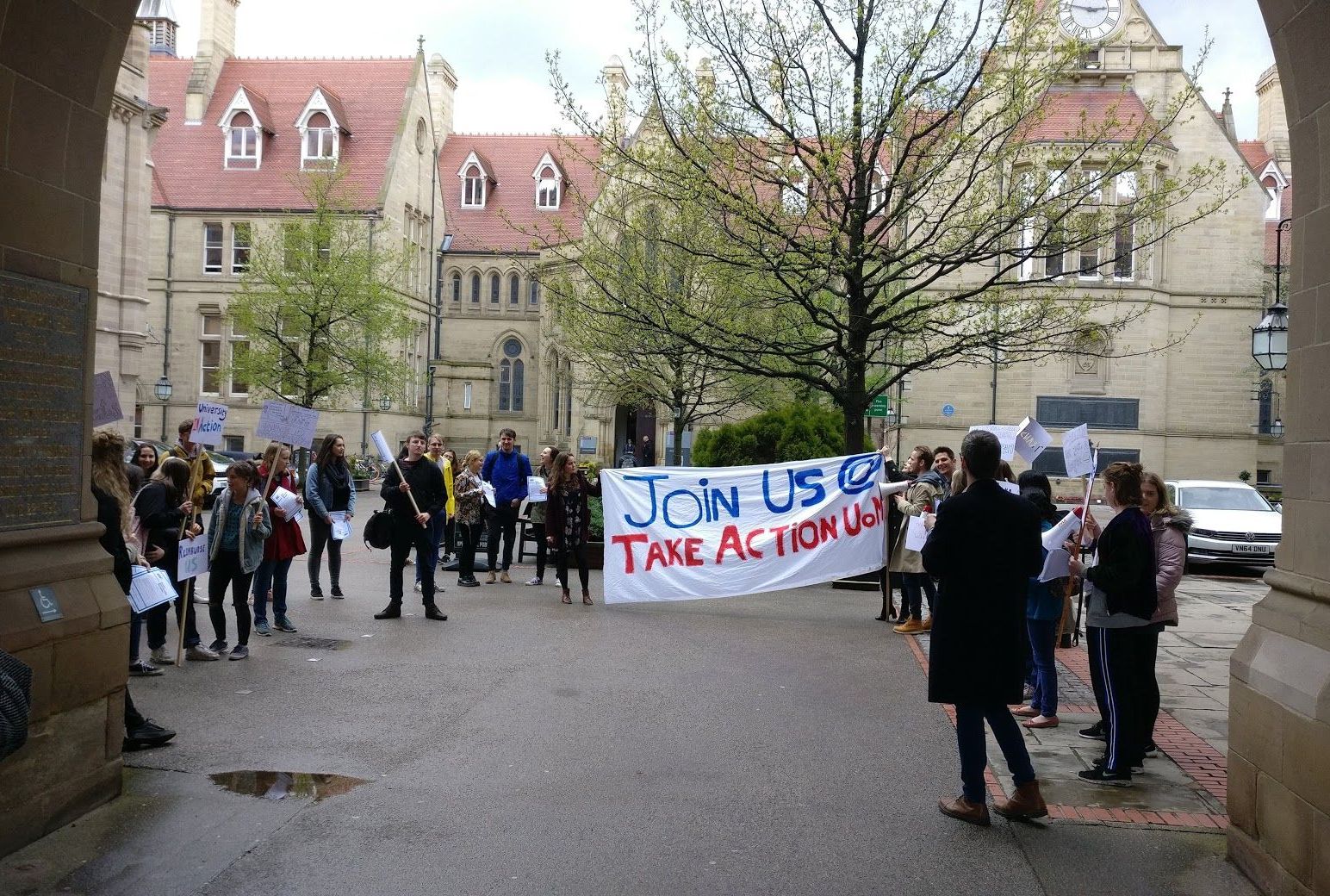 The compensation protest gathered within the Old Quad on Oxford Road

Students within the group are coordinating to pursue compensation through the university's official complaints procedure, which gives students the powerful option of referring the complaint to the Independent Adjudicator for Higher Education, should the university not make an offer deemed satisfactory.

The Independent Adjudicator confirmed back in March that students could be set for compensation, and released a briefing note encouraging students to submit complaints.

Ahead of this afternoon's protest, an email jointly signed by Nancy Rothwell, and Student's Union General Secretary Alex Tayler gave the University's financial savings during the strikes as an estimated £1.2 million. 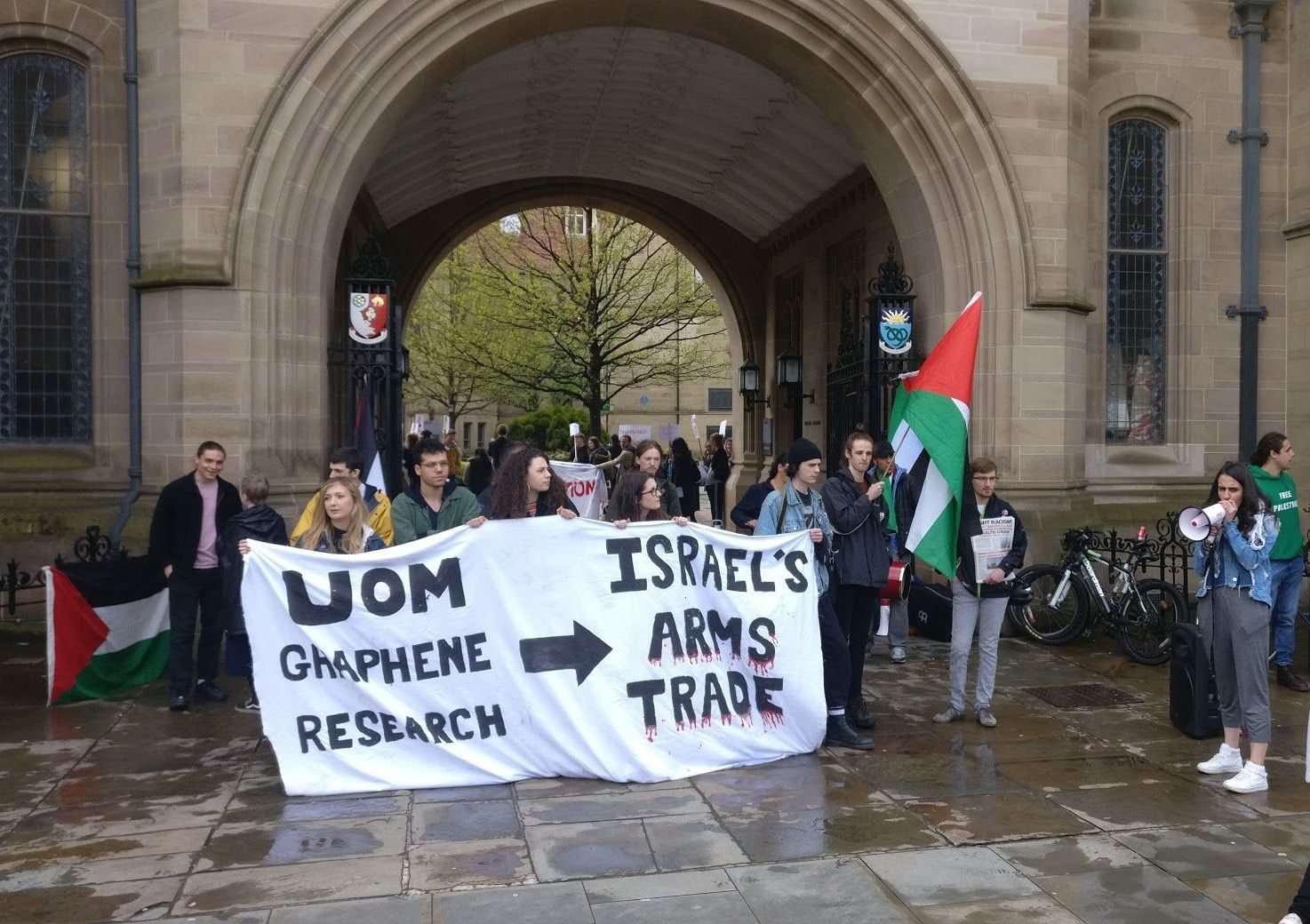 #GetNancyOut protesters, with the Take Action! UoM protest visible behind them on the far side of the Whitworth Arch

On the other side of the Whitworth Arch, facing Oxford Road, a simultaneous protest was organised by Demilitarise Education.

Having brought several drums, flags, and a megaphone, the protesters were certainly heard as they displayed a banner drawing attention to the involvement of UoM's famed graphene research in the Israeli arms trade.

The protesters from 'CAAT Manchester' and 'BDS UoM' occupied the spot on Oxford Road for well over an hour.

They claim that The University of Manchester's partnerships with several companies, including Lockheed Martin and BAE Systems, render UoM an active participant in the global arms trade, and "therefore complicit in war crimes all over the world." 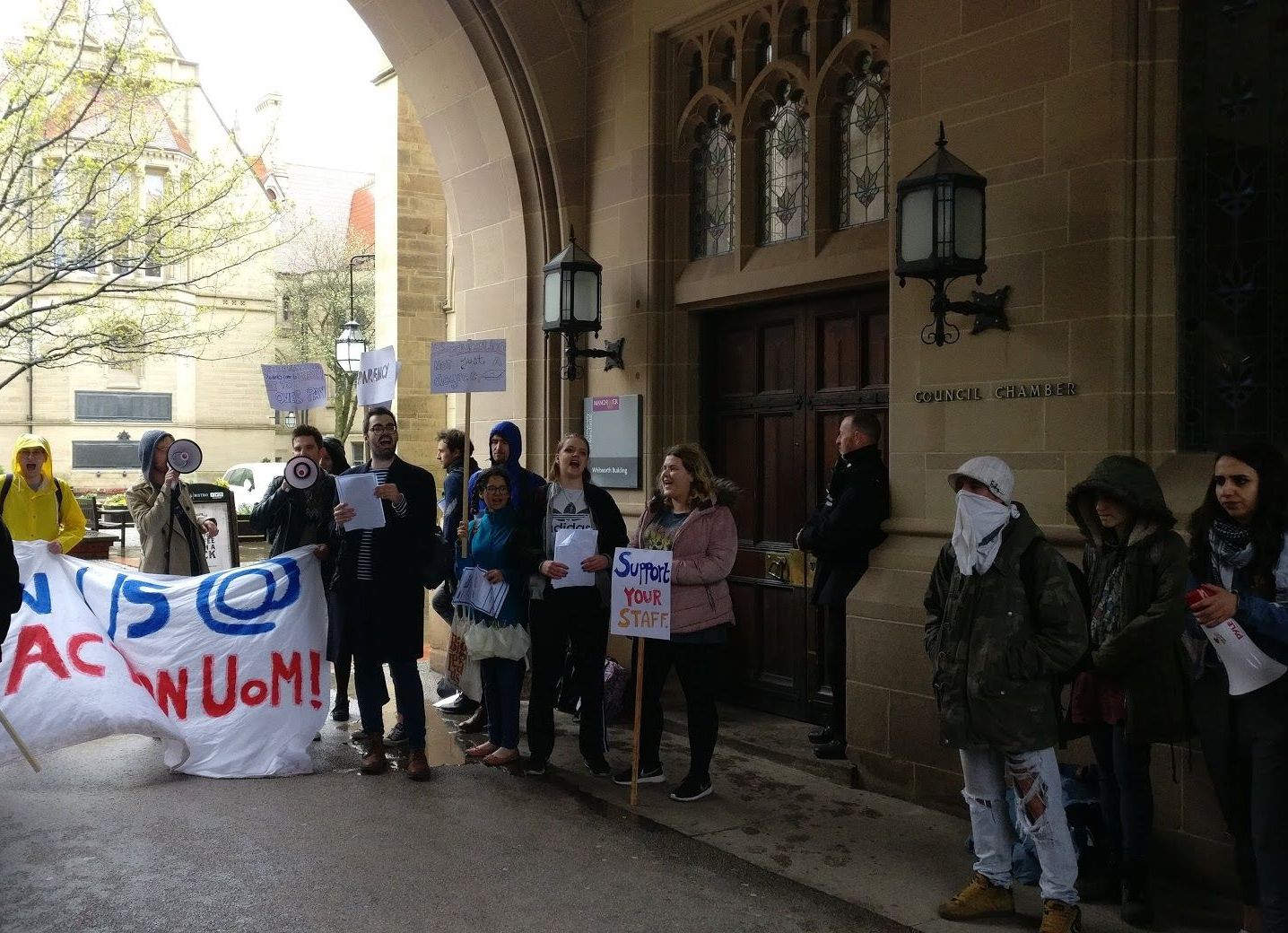 The two protests joined together under the arch during a spell of heavy rain and hailstones, shouting "Nancy, Nancy! Shame! Shame! Shame!"

The compensation protest followed a series of open meetings last week, during which UoM management confirmed they were considering offering students free gown hire at graduation as compensation.

With a value of around £35-£40, the majority of those in attendance found the offer laughable, and spawned chants of "Gowns aren't good enough, turn them down!" this afternoon.

The first meeting also gave rise to controversy when a high-ranking professor stated that their "contract is to deliver a degree," rather than an education. After a video recording of this statement was obtained by student media, the University moved to ban audio and video recording of future meetings to facilitate "open and honest discussion."