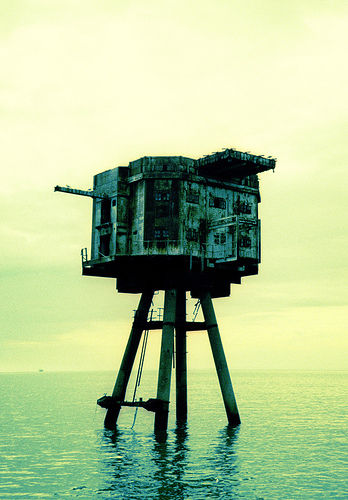 Have you ever looked at the current economic crisis and wanted to escape? Dreamt of running away to a safe haven? A Utopia? What if the search for your little slice of heaven took you to the middle of the ocean, completely abandoned, on an old oil rig?  I went to see SEALAND, written and directed by Luke Clarke at the Arcola Theatre Tent in Dalston Kingsland, to discover whether paradise really can be found in the most unimaginable place on earth.

Ted and his son Alex have started a small colony on an abandoned oil rig named Sealand to escape ‘Broken Britain’. They are joined by Liz, her husband Gary, an alcoholic, and their teenage daughter Sarah. However, things start to go wrong when tempers flare and a government inspector starts to persistently turn up, causing problems and throwing Ted’s dream into question.

The play cleverly explores interpretations of what makes a utopia, and how far humans are willing to go to preserve their slice of paradise. It is dark and tense, yet immensely witty. Luke Clarke has excelled in creating characters that are relatable to the audience with just the right amount of spice and personality to create a boiling pot of emotions and tension that such an isolated and claustrophobic setting will explode. The audience’s morals are truly tested: Can we condone the actions that take place in this isolated setting? And is it Britain that is broken, or its people?

On entering the theatre, you immediately feel isolated along with the characters in the middle of the ocean, met on stage by subtly aquatic and sombre lighting and a single platform comprising the oil rig. The scenes play out either on or below deck, and the seemingly small set cleverly opens up to reveal the lower level, yet the result is still claustrophobic, creating suspense from the start.

For such a small and suffocating set,  there is a breathtaking amount of adaptability in each new scene. We see the characters cook, fish, stargaze and rave on the smallest of sets, and yet size and movement is by no means an issue.

In fact the only downside to the play is that the theatre in which it is set is at times susceptible to outside influence. That is to say, every so often you might hear the passing of the London overground or the wailing of a siren. However the performers deal with this professionally, and the audience doesn’t get distracted by it.

What is refreshing about the show is it’s originality. Not just the concept and impeccable writing, but the sheer talent on show from a group of performers freshly out of East 15 drama school. The cast performed like seasoned professionals, owning the stage and commanding the audience’s attentions and emotions.

The stand out performance was Jess Stone playing Sarah, the teenage daughter of Gary and Liz. What Jess brings to the character is a perfect balance between hilarious rebellious teenager, frustrated young woman and vulnerable girlishness. Far from just being funny, Stone also plays the serious scenes seriously well. The audience truly feels for her mistakes and her desperation to break away from the poisonous atmosphere on the oil rig.

The character of Alex, Ted’s son, played by Ed Pinker, also offers the audience light relief from the stormy atmosphere on stage despite his troubles. The audience most definitely enjoys watching him be led astray by Sarah. However this character is also the conscience of the play. The moral glue around the other more dysfunctional characters. Pinker shows remarkable maturity in the play’s climax, torn between doing what is right or loyally preserving his father’s dream when Alex discovers the chilling extent of his father’s actions.

Janet Etuk in the role of Liz is not only the mother of the play, she’s the human element of the piece. Janet brings a soft and kind nature to the mix of characters, drawing sympathy and empathy from the audience. Whilst the most understated of the characters and performers, Etuk commands a remarkable presence on stage.

Seamus Bradford as Gary demonstrated great control of his emotions when desperately trying to overcome the his character’s frustrations, anger and alcoholism. The audience sees his struggle, but is also allowed brief glimpses of the character’s softer side in a touching scene shared between Gary and Sarah.

Adam El Hagar is wonderfully domineering and controlling as Sealand leader, Ted, trying desperately to hold on to and maintain his dream of a perfect life away from Britain and its unemployment, violence and crime. El Hagar successfully pushes the boundaries of the audience’s emotions and morals, when his extreme actions lead to a very disturbing and exciting climax. What makes this actor truly special is his incredible stage presence, and his evident natural ability.

For the first piece of writing and direction Luke Clarke has professionally showcased, SEALAND is both triumphant and deeply emotional. Tense and dramatic. Witty and incredibly challenging. Making for a play that is both thought provoking and entertaining. Capturing the audience’s imagination, challenging the depths of our emotions and morals, this play is a dead cert to enjoy an extremely popular run, so make sure you don’t miss out!

SEALAND is being performed at the Arcola Theatre Tent in Dalston Kingsland from 24th October until 10th November. For ticket details and bookings, visit http://www.arcolatheatre.com/production/arcola/eh-to-e8–sealand (concession tickets available)