Forget art institutions and academies, Street Art London takes us on tour through a gallery with an infinite number of walls.

For most students, Sunday mornings are a time for reflection – usually on the horrors of the wild night before.

Emerging from exit two of Old Street tube station at 11am would seem to imply that you were returning home from a heavy Saturday night, but not in this case. A huddle of people loitering by the bike racks grew bigger and bigger, and it was soon apparent that they, too, were waiting for the Street Art London Tour to kick off. 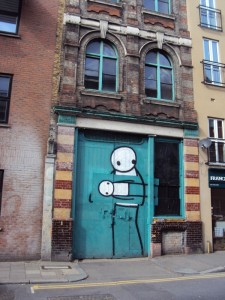 Crossing the road, we were swiftly led by our guide Karim (a street artist who seemed just a bit too cool for school) onto the pavement. People began to focus on a painted wall which we naively thought was the first example up for discussion. It was only when we were told to look down that we noticed, out of the blue, a tiny unremarkable blob of painted chewing gum on the pavement: ‘This is by Ben Wilson from Muswell Hill.’ It took a while for people to stop laughing at this artistic specimen shining up at us. However, it then took only a matter of minutes for us to realise that we were in fact surrounded by hundreds of examples of street art, some more hidden than others, and as the tour went on, the streets of London began to emanate the kind of aura you’d expect from works in the National Gallery.

‘Art Thief’ by Stik was a perfect example of how complex this lesser-known art-world really is. The work depicts one of Stik’s infamous stick men standing the height of the first floor of a building. Next to the figure is a blocked-up window frame which initially held a smaller replica of the large image. Over time, the small image was removed, like a canvas being taken off the wall, and painted into the arms of the large figure, hence the title ‘Art Thief’. It seems that street art that is simple is the most effective. Composed of only a few lines and two dots, the work conveys emotion and opinion despite its simplicity; Stik is making a statement about moving art from the streets into the gallery – the result of his fame as an artist.

However, it seems that one of the most significant factors that sets the street apart from the gallery is humour. Street art isn’t afraid to be funny. It doesn’t feel the need to apologise or use humour simply to cover up a lack of meaning. Street art can say what it wants and it doesn’t have to commit to a set of regulations. 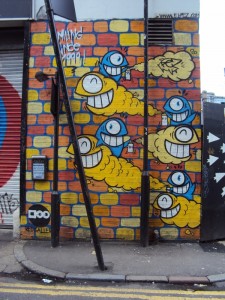 It wasn’t all chewing gum and stick men though. ROA, a 27 year old Belgian artist, creates large-scale animal images based upon layers and anatomy. His style has been referred to as a kind of artistic ‘taxidermy’. Whether it’s a huge black crow or an animal carcass, the works show both enormous skill and originality. Street art often also draws attention to derelict buildings in the same way that ROA draws our attention to anatomical detail or hidden layers that we often neglect.

There is an exciting feeling about the future of street art. Although it has been in London for many years, now feels like the time to view it. Anyone can explore the streets and Street Art London is making it more accessible than ever. A tour such as this is also an exploration of the city through art and is invaluable for people who are new to London. What’s more, there are more works than in all of London’s galleries put together, there’s no entrance charge and it’s right on your doorstep.