Why your Long Distance Relationship is Doomed to Fail

Alex Simpson tells us why the current ‘love of your life’ really isn’t worth the effort. 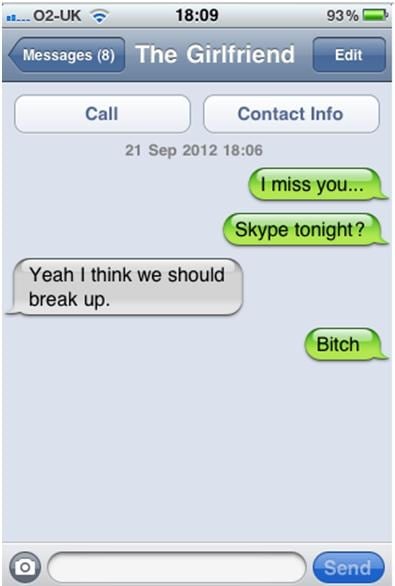 Well, why would they?

The average LDR is a ticking time-bomb: defuse it or watch it explode. So to help you avoid that ominous countdown, I’ve gathered a few agonising truths that every committed Fresher will never want to, but needs to read…

The need to be touched

As The Rolling Stones once said, “We all need someone we can lean on”. Lean on, dream on… cream on. Seeing your partner every other week may initially seem sufficient, but the truth of the matter is an LDR will never fulfill your emotional and physical needs. Physical contact is an essential element of most relationships; after all sex speak volumes when there’s nothing else to say. And whilst you may feel you possess the will to be faithful, as night falls the provocative nature of the Moonies’ dance floor after far too many jägerbombs can prove fatal. Promises will be replaced with promiscuity. It’s only a matter of time before one of you finds someone else to lean on.

University is more than an education and an accumulation of excessive debt; it is a catalyst for transformation. New friends, fresh ideas and cut-throat personal ambitions will swiftly overshadow the people you and your partner thought you were. An investment banker and an aspiring musician? Compatibility rating: 3%. It won’t be long before tell-tale echoes of ‘you’ve changed’ begin to haunt your LDR. After all, it is highly unlikely the ‘new you’ will want the same as the ‘old you’. Looking to the future will leave little desire to look to the past and you will soon find yourself wanting to throw away that picture perfect relationship to make room for your nice new blank canvas.

21st century technology has furnished the long distance couple with countless methods of staying in touch. Daily emails, text-athons, phone calls and weekly Skype sessions can fill that boyfriend or girlfriend-shaped gap. But despite the hours spent endlessly chatting in the past, even the most communicative couples can find themselves devoid of ideas for conversation after the 709th email. Skype may seem like the solution but it frequently becomes the problem. A few missed Skype sessions can be as toxic to trust as missing an anniversary. And let’s not beat around the bush: as horny, sexually deprived students you’re bound to dabble in a little virtual sex. But all virtual sex will become virtually pointless as the weeks progress. Licking the screen will leave a bad taste in your mouth. So if you can’t be touched, can you be bothered? Who wants to fondle an image when the cutie down the hall wants to fondle you? Goodbye communication equals goodbye relationship.

‘Lovin’ life 2k12’ may be trending but ‘tuition fees 9k00’ is not. The financial life of today’s student is increasingly gruelling. Shortages of money frequently spell trouble for the LDR; the pressure of affording your £160 box of a room and all the Sainsbury’s basics vodka you can carry will sooner or later result in selfish yet justified doubts concerning your bi-monthly visits to see your other half. Can you really afford that £70 return ticket to Durham? Moreover, do you really want to pay it?

Thanks for the memories

Ah, memories. A memory is a precious possession when your loved one is far away. But your unblemished memories will eventually pass their sell-by date. What happens when they are overshadowed by excruciating recollections of nights spent alone, waiting for texts, hypothesising reasons why you haven’t yet received a reply? Are they cheating? Probably. Have they stopped caring about you? Possibly. Do they want to break up? Almost definitely.

So, still think your LDR is going to endure the test of time? We’ll see. The historic walls of UCL may have appeared in various films, but it is important to remember that unfortunately we do not live in one of them. Your dreams of a happily-ever-after will most probably become nightmares before the academic year is over. Distance is about to rob you of everything you took for granted before: sex, money and quality time. Well, what did you expect? Life is a series of minefields and if you’re in an LDR, you’ve just stepped into one. Think wisely and tread carefully: it’s going to be a bumpy ride.