Michael Blackburn, who taught English, is no longer employed by the University

Michael Blackburn, the Lincoln uni English lecturer who tweeted that "terror attacks were carried out by Muslims because of Islam" has left the university halfway through the year, The Lincoln Tab can confirm.

One tweet by Blackburn stated: "If the left hadn't told me the EDL were the real threat I would have carried on thinking it was machete-wielding, Koran-quoting Muslims."

Another tweet stated: "Thank God all those papers going on about patriarchy and the oppression of women are out the way for another year."

At an Undergraduate Committee meeting, it was suggested that Blackburn was taking an "early retirement".

Now, The Tab Lincoln can reveal that Michael Blackburn is no longer employed by the University of Lincoln. 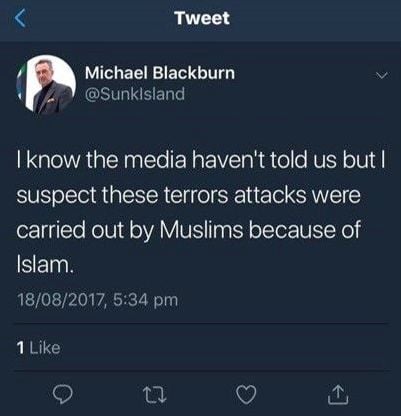 Alongside teaching, Blackburn was an admissions tutor for the English department and also ran the department's social media.

During the investigation into Blackburn, pupils taught by him were not given any information on the reasons for his absence, but were sent an email confirming their seminar groups would be changing.

First year student Charlie told The Lincoln Tab: "It was just assumed by everyone in the English group-chats that he had left, our timetable didn't change until the start of the term." 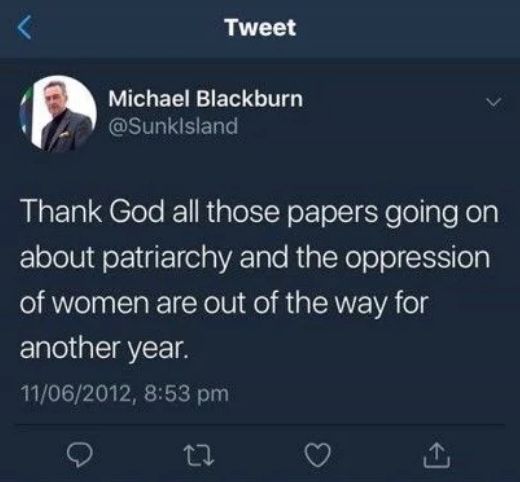 Luci Johnson, who was taught by Blackburn in her first year at university told The Lincoln Tab: "I was told when my group were sat down in a seminar. Our tutor addressed the issue at the start and kindly asked if anyone had been affected by it to talk to the tutor after.

"The tutor had the same feelings towards what Michael had said as we did, but he was very professional when discussing the issue and made sure the conversation wasn't side tracked into slander.

"We did not get an email at all. If I didn't go to that seminar or missed the first five minutes of it I would not have known that he was under investigation."

Following his absence from the University of Lincoln, Michael Blackburn posted a blog on the Fortnightly Review website expressing his feelings about the situation.

In the blog, in reference to those who complained about his comments, he states: "They'll batter away on their keyboards, hyperventilate on social media, send off emails to whoever is mummy and daddy in authority, demanding they stop the naughty man or woman from saying upsetting things.

"Then they’ll go back to gossiping about who’s having sex with whom and who threw up in the club at the weekend after too many Jagermeister bombs."

And again, he specifies his anti-feminist beliefs: "The predominance of females in the humanities plays a significant part as well.

"I believe they’re more susceptible than males to being taken in by the current varieties of identity politics, especially as these are weighted in favour of women's issues and tilted against men; and because they are easily swayed by the fake compassion under which these issues are promoted.

"Not to forget that in terms of group behaviour they’re more likely to indulge in character and reputation assassination than males."

A spokesperson for the University of Lincoln told The Lincoln Tab: "We can confirm that Michael Blackburn is no longer an employee of the University."

At the time, the University of Lincoln told The Lincoln Tab: “We cannot comment on complaints made against individual members of staff. As a University we have a commitment to equality and diversity, and we treat each other with dignity and respect.

"Equally, we recognise individuals’ rights to hold different beliefs and views. We uphold the principle of free speech exercised responsibly within the law in all our activities; the right to think and speak freely and to explore ideas is fundamental to the idea of a university."

"Upholding academic freedom and respecting the views of others are joint commitments shared by all members of the university and we have a clear Code of Practice on the Freedom of Speech, which is designed to ensure that freedom of speech within the law is secured for all staff, students and visiting speakers."

The Lincoln Tab has tried to reach out to Michael Blackburn for comment but without success.