She thinks politics and pre-drinks are a good combination

Emily Hewertson, often better known as "Brexit Party Girl" rose to fame after appearing as an audience member on BBC question time and subsequently posting a video of her watching the EU election results at pre-drinks.

Since then Emily joined King's, continuing to voice her political opinions on various media platforms including a video this week with the Sun as part of their "Brexmas Election".

But what else do we know about the now famous "Brexit Party Girl"?

She became famous for saying she would support the Brexit Party

Emily rose to fame when she spoke out during BBC's Question Time stating she would be supporting the Brexit Party in the then upcoming EU elections.

Hewerston stated: "I have been a member of the Conservative Party since I was 16, I am now 19, and the party has let me down, so I will be voting for the Brexit Party."

She also made it clear that she thought the option of a second referendum was completely "undemocratic."

This Conservative Party member says she will be supporting the Brexit Party in the upcoming European elections. #bbcqt pic.twitter.com/IJ2QfTjVvi

On the night of the EU election results Emily posted a video of her at pre-drinks with her mates, with her avidly watching the results of the election in the background.

When you’re on a night out but need to watch the EU election results 😂 pic.twitter.com/UksfCHEQgP

She is from Northampton

According to Hewerston's Instagram and Twitter she is from Northamptonshire, but now lives in London and studies Politics and Religion at King's.

She decided where to go to university based on a poll

Emily had the choice between studying her chosen course at either KCL or Nottingham.

Choosing your university is one of the biggest decisions a 18 year old can make, so naturally she chose to ask Twitter for their opinion. King's won by 10 per cent in her poll, so she moved to the big smoke.

Emily told The Tab King's she was "extremely excited" to go to King's and it was "a dream come true."

She is a member of the Conservative party

She stated at Question Time she had been a Conservative Party member since she was 16 and, despite her brief stint joining the Brexit party, she is still a Conservative. Her Twitter profile name is even "Emily VOTE CONSERVATIVE Hewerston". 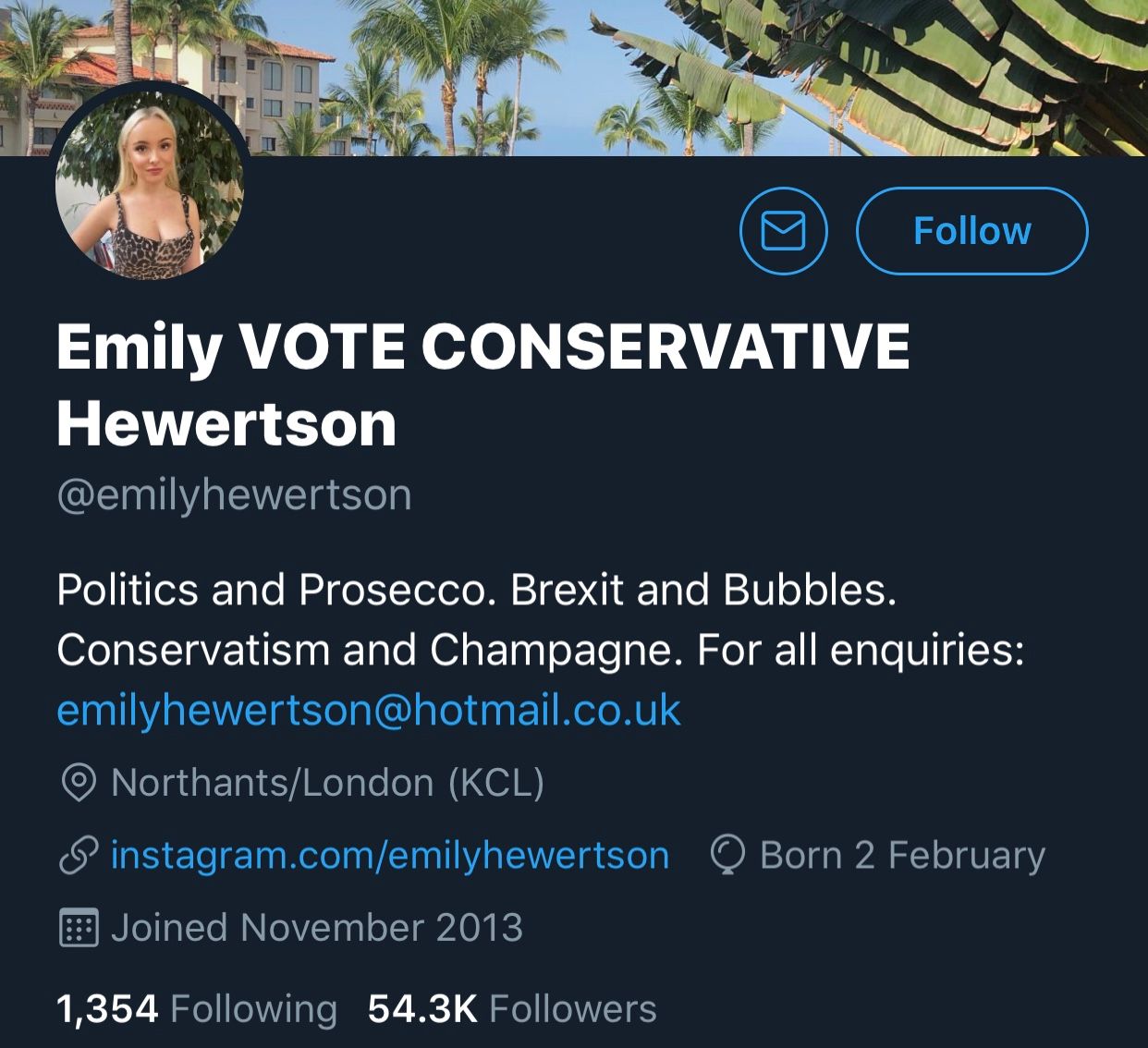 This week Hewerston did an interview with the Sun where she voiced her opinions on the upcoming General Election.

Hewerston said: "A lot of people on social media portray Tories as these evil people that just hate the poor and want all the poor to die, it's absolute bollocks to be quite honest with you. Boris is the person who will finally get Brexit done.”

Why this 19-year-old Conservative is voting for Boris and not Corbyn. @emilyhewertson #GE2019 #CostOfCorbyn pic.twitter.com/T8vDS0i05z

But she does think Jeremy Corbyn is good with young people

"Jeremy Corbyn is very good at engaging young people in politics and that is one thing that I like about him. Like when he got up at Glastonbury that was quite fun."

She created a unbiased list of what each political party believe

For her "completely non-political friends" Emily created (on her iPhone notes) a summary of each parties stances toward the EU.

Just found this that I sent to my (completely non -political) friends before the European Elections who wanted help with who to vote for.