Honk if you agree

For the duration of the strike at Strand campus, there are regular events organised by members of the KCL UCU, which aim to create a safe space for students and staff to discuss and promote the education system we all want to see at King’s.

We attended the event on Tuesday 6th March, and alongside some excellent strike campaigns, we also witnessed some discussions about racism and discrimination on campus, and how we can fight for a better education for all.

We were greeted by Jim Wolfreys, a senior lecturer in French and European Politics, and president of the King's UCU branch, who introduced the event and its speakers. The first was Lucia Pradella, a campaigner for Free Movement of Labour, who placed her demands on college management over questions of race and discrimination. 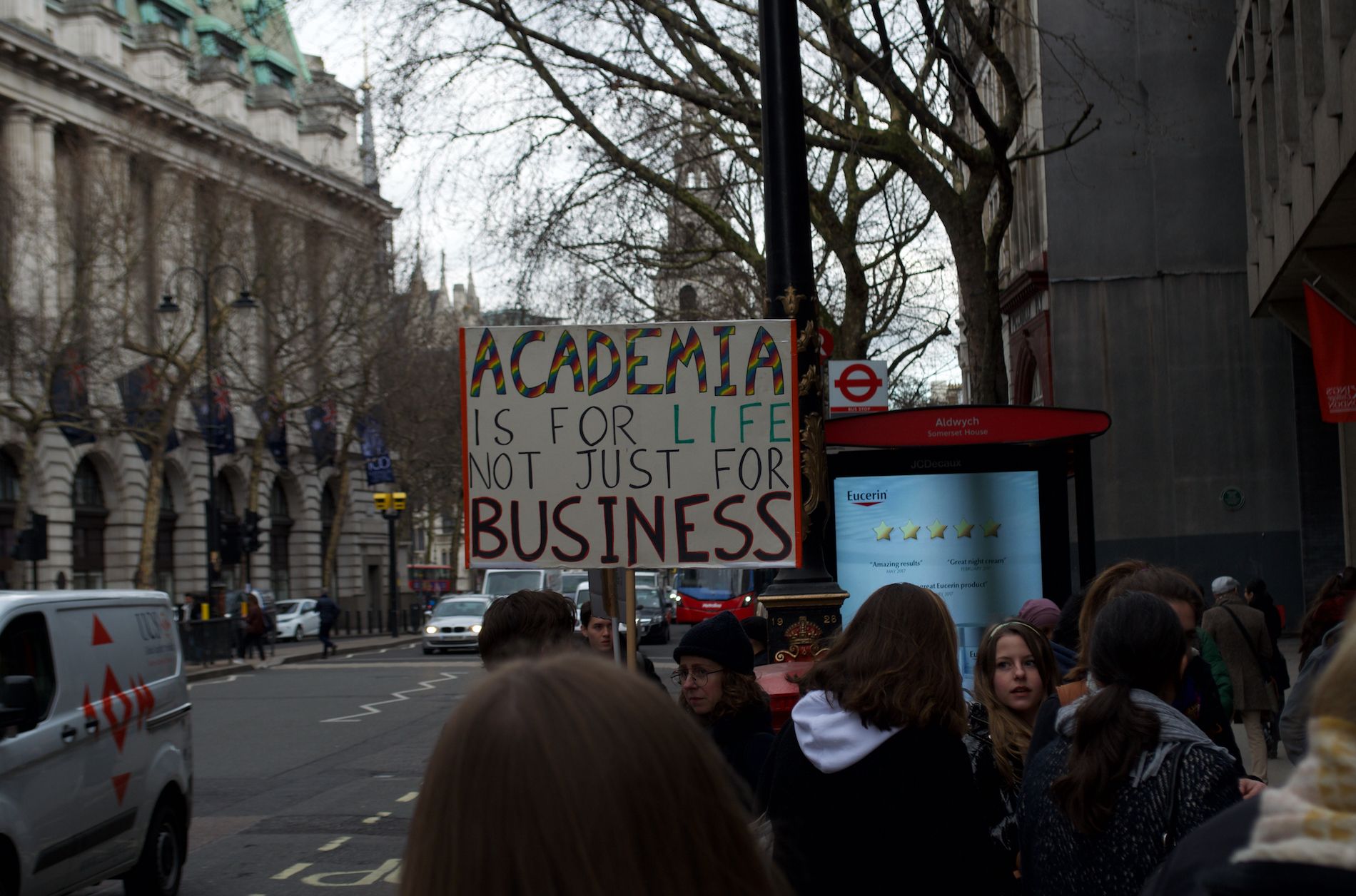 Just one of the many signs held up at Strand

She emphasised the severe growth of far-right and fascist parties in Europe and the US, citing the result of the recent Italian election as a demonstration of a successful anti-immigrant election campaign. To her, the concept of having a campus free from discrimination requires campaigning for Free Movement of Labour, and she had begun the project after the results of the Brexit referendum.

The growing feeling of dissatisfaction with the left and the rise in support of right wing parties brought her to ask a pivotal question: how can anti-racism be built on campus? She noted her horrors at the racism she had witnessed carried out on the streets of Italy, and highlighted the severe gap in bipartisan agreements for governments to intervene in matters of immigration. 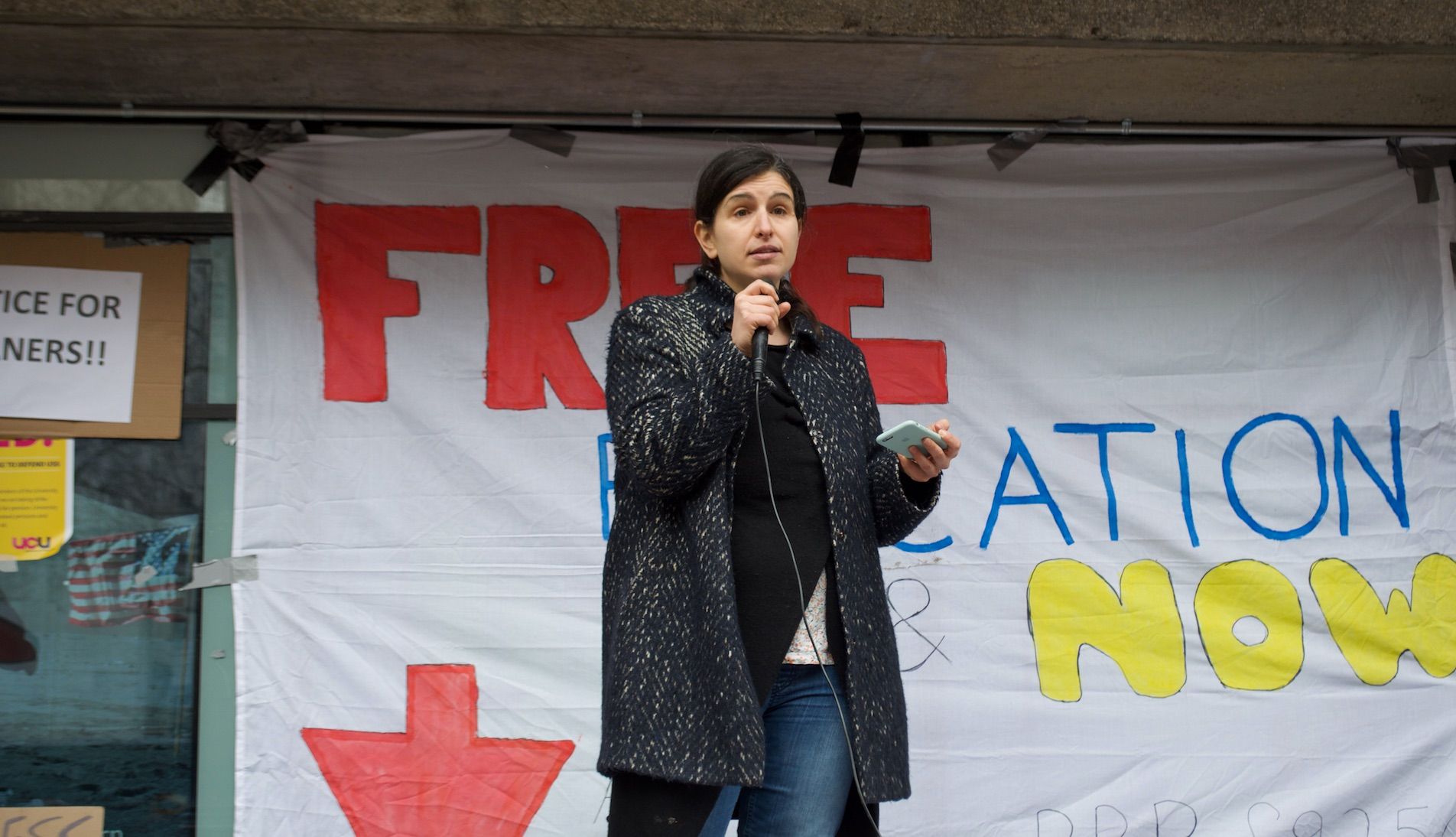 Lucia Pradella, speaking passionately in front of the crowd at Strand

Next up was Naima Omar, representing Stand Up to Racism, who highlighted the shocking findings revealed by a Freedom of Information request that between 2010 to 2015, only three of Oxford's 32 colleges made an offer to a black A-level applicant every year.

She also claimed that there was a lack of employment of black academics to universities, particularly top positions. Her talk highlighted the worrying rise of racism within our education system, and the systematic bias that is becoming prevalent in universities nationally. She also expressed the need to lose the borders of race on campus, calling for an acknowledgement of the efforts to liberate education, and how these efforts should be long term ones. She added that those calling out racism in the classroom are victimised and made to leave.

We were then greeted by Malia Bouattia, a former NUS president, who warned that black academics are being “casualised” (the alteration of employment practices so that regular workers are re-employed on a casual, or short-term basis) and that we should look towards campaigning for equality, not just in the pension strike but for education reform going forward. 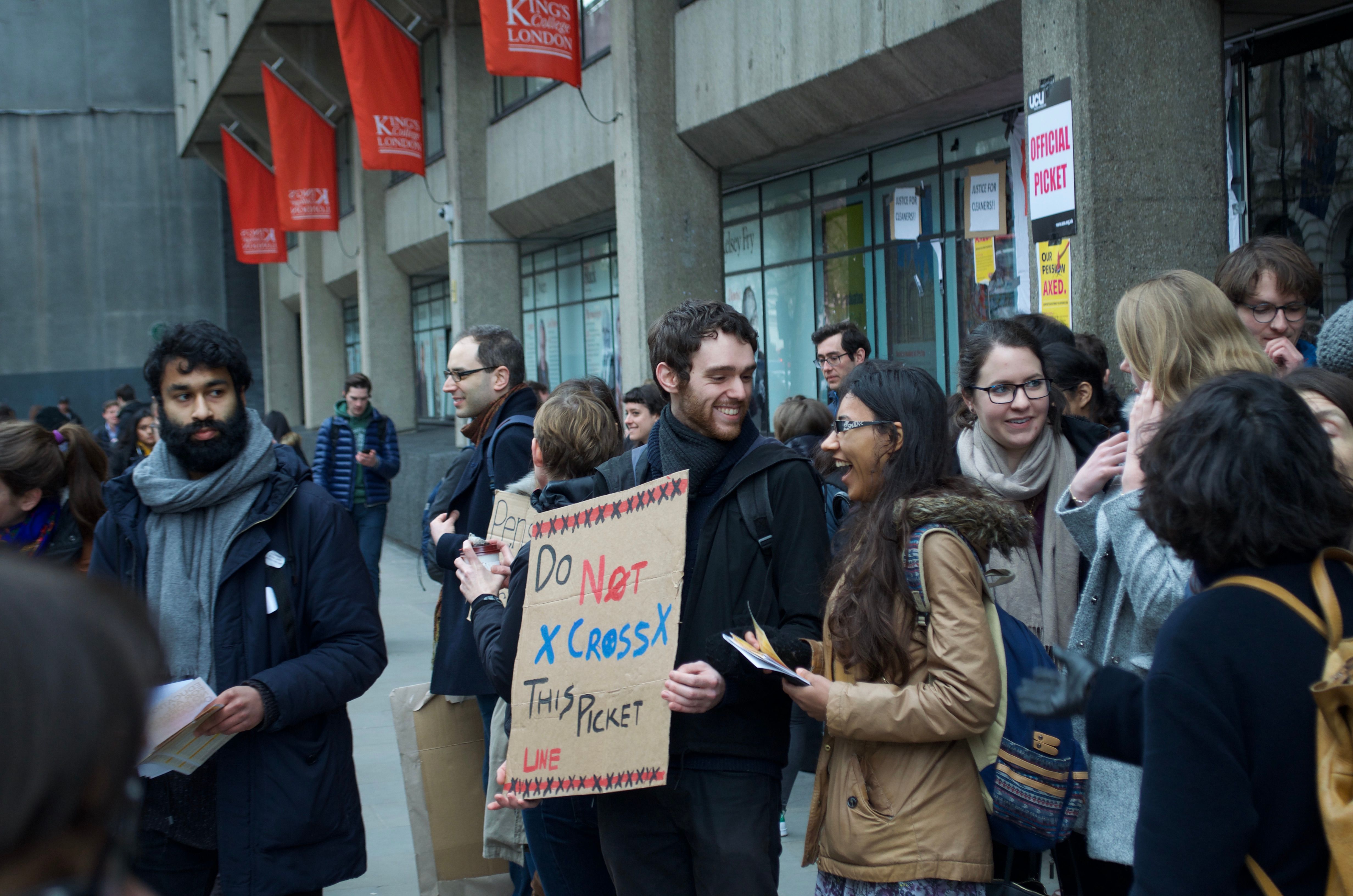 The event also attracted the attention of rapper and activist ‘Lowkey’ (he’s actually released some decent music with a political message, check him out) who took to the mic to preach solidarity and unity – he reminded everyone that the whole point of staggering the lecturer strike is so students are still able to attend some of their classes – we should support our lecturers to achieve better education for everyone. 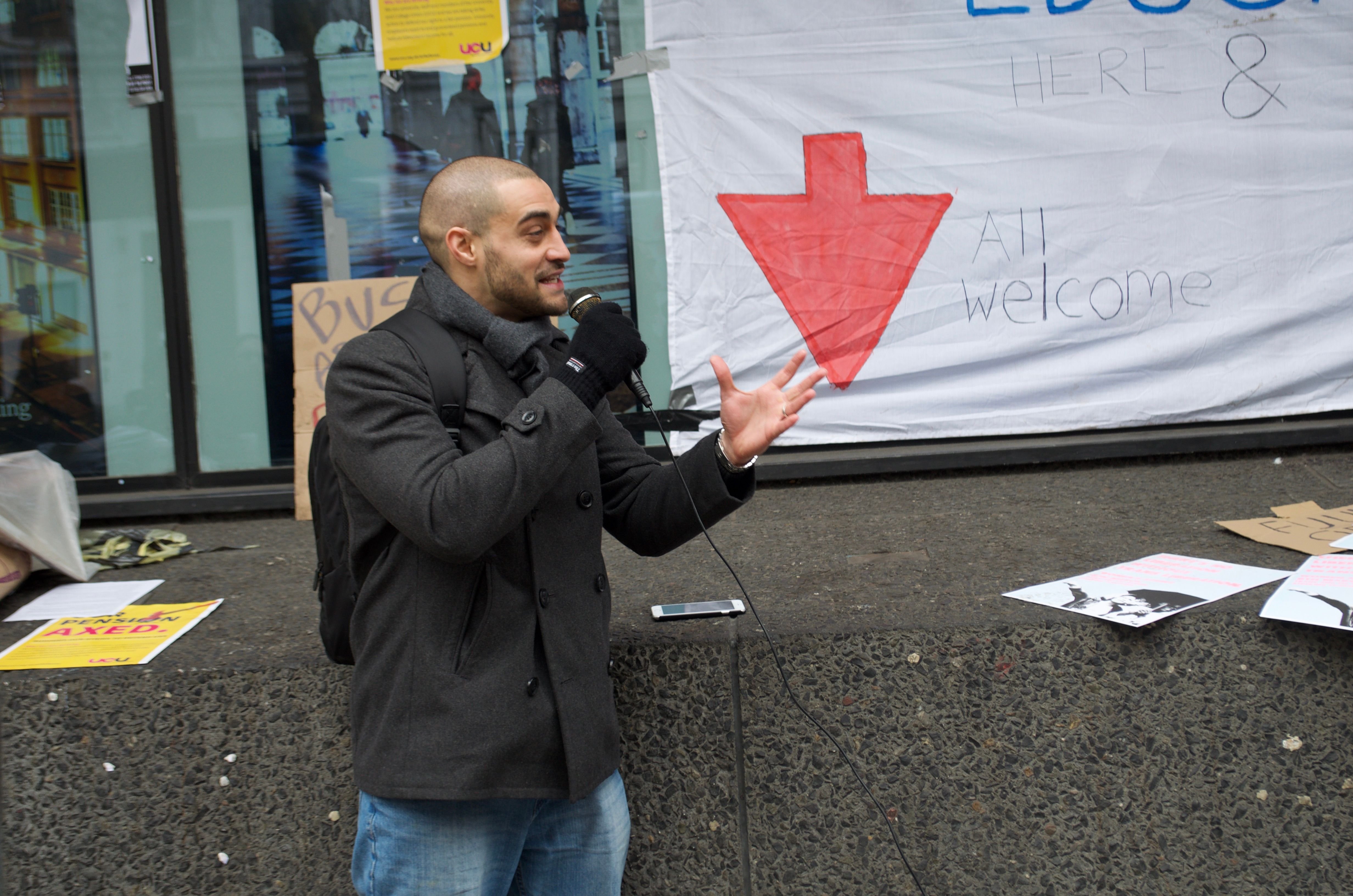 Lowkey on the mic yo

On top of that, there were some excellent signs from the strike, including one encouraging passers by to honk their horn if they agreed with stopping the pension chop – this was a strategy that certainly went down well, especially with the bus drivers – I found myself jumping out of my skin every five minutes as the honks kept coming in. 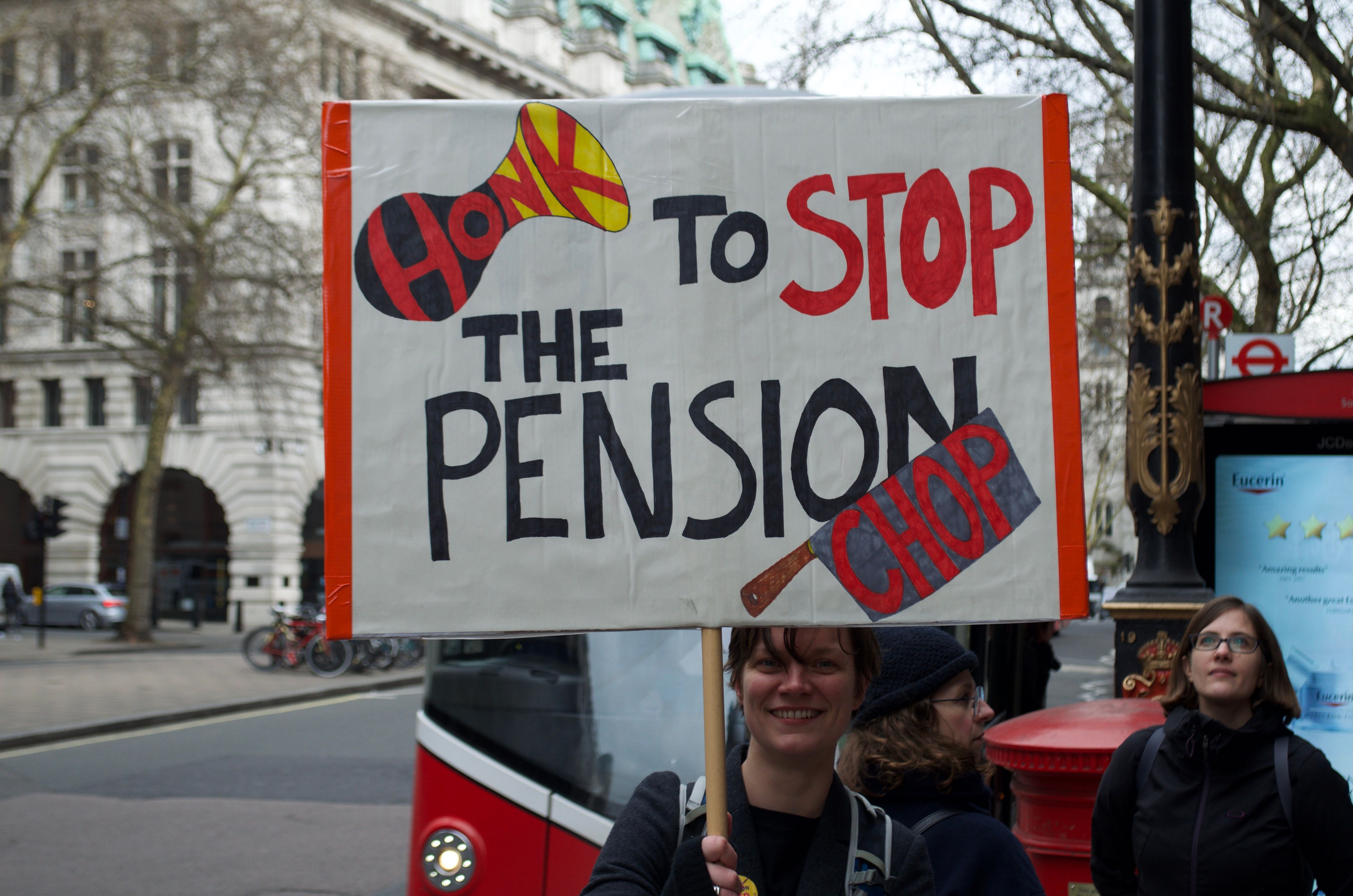 HONK TO STOP THE PENSION CHOP – believe me, they did…

So, if your class is cancelled, check out more events outside Strand, every strike day at noon.