‘Fucked to death like she ought to be’: Glasgow Uni newspaper publishes extremely graphic fictional rape story

A Glasgow University newspaper have published a story which features a violent and explicit fictional account of a man describing the rape and murder of a women.

'The Medusa Review', which has recently gained SRC affiliation, released 2,000 printed copies of its first issue this week containing the graphic rape story on the back page.

The back page has two fictional stories, with the first describing an extremely explicit and violent portrayal of a man sexually abusing and eventually killing a woman.

The following quotes which are in the article contain graphic details of a woman's rape and murder, which some people may find distressing:

‘I lean back and stare at this eyeless fucking woman. This tease. This whore. This piece of shit on trash. All I can do is stick my thumbs in the empty sockets.'

'Fucking women. Beauty of death: cunt of a life. I know because I know them. These cunts.'

'Later she's dead. Fucked to death like she ought to be.'

'Bringing the knife to her chin, I straddle her on the floor and she whimpers like a dog. She will be punctured beyond her imagination.'

'She spits at me as the blade touches her stomach, my hand twisted through her hair.'

'And so finally I stab her cunt. Without purpose, without end.' 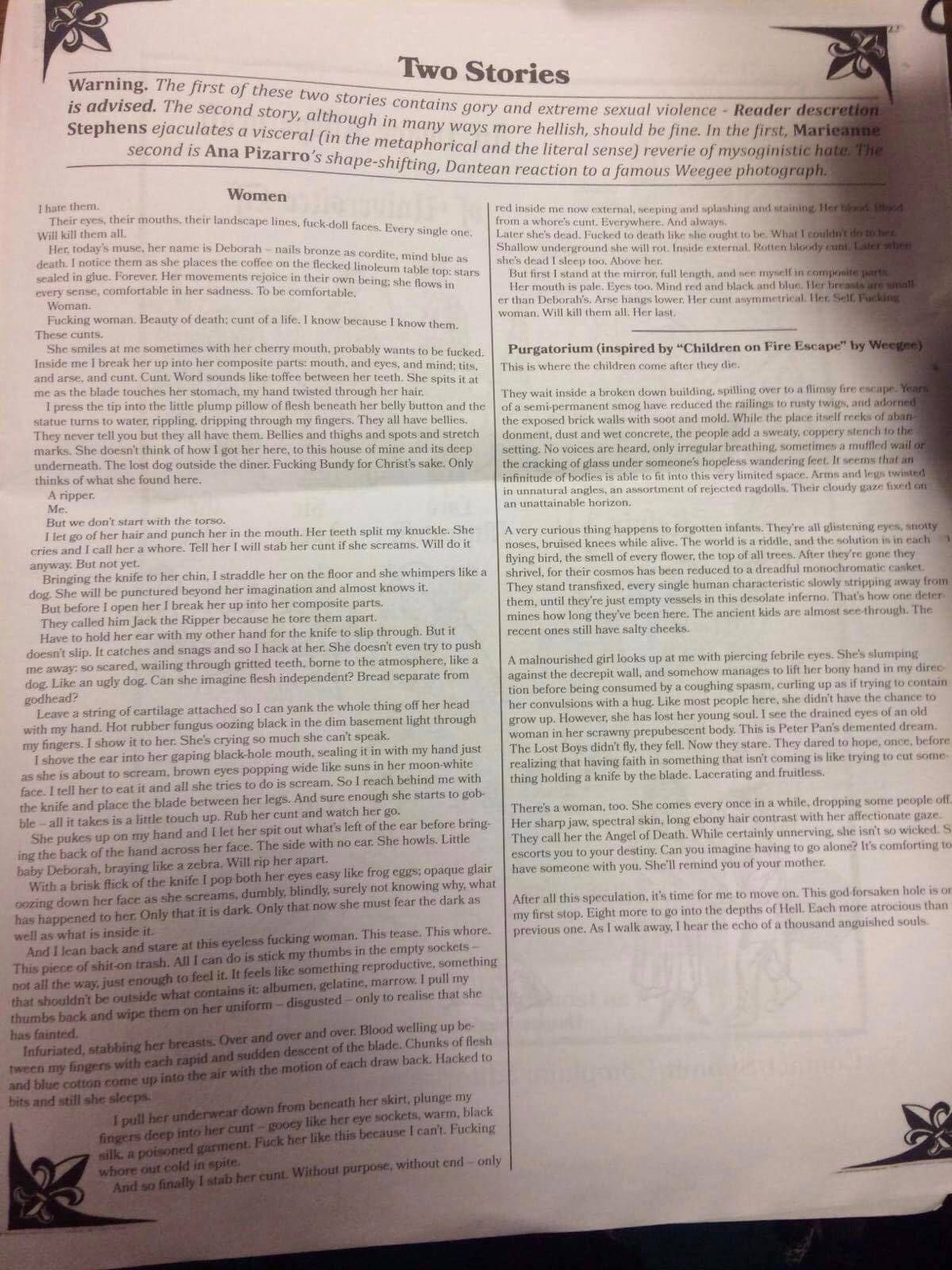 The article’s title merely warns readers: "The first of these two stories contain gory and extreme sexual violence", with "reader discretion" being advised. The second story is described as "more hellish", but "fine".

Following this statement, there is a suggestion the story has metaphorical value, continuing: "Marieanne Stephens ejaculates a visceral (in the metaphorical and literal sense) reverie of mysogynistic hate."

Readers will note that the word 'misogynistic' is spelt incorrectly.

However, the story that follows portrays sexual violence that is both sickening in its nature and in places intensely difficult to read. It appears the brutal rape of a woman is somewhat fanaticised in a way that readers may find difficult to see any metaphorical value behind.

Following a refusal from the Glasgow University Union to stock copies of the paper, the editor attempted to ensure they would remain there by 'inviting' readers to leave their copy in the GUU.

The paper claims to represent a group of students "who became disillusioned…but who realised that at university, before the real world suffocates you, it is actually very possible to do things differently."

The Tab Glasgow has contacted the newspaper and the University of Glasgow for a comment and are awaiting a response.