Review: The Importance of Being Earnest

An evening of fun, farce, and food

‘A Trivial Comedy for Serious People’ is the subtitle to Oscar Wilde’s classic comedy, which strikes me as a promising and appropriate tagline for theatre-goers in need of some triviality to lighten the drudgery of Week 7. HATS’ production delivers this light-hearted antidote to essays and problem sheets, with a strong cast ensuring an entertaining evening. Though sometimes lacking in energy, this was an *earnest* (sorry) and enjoyable staging of Wilde’s witty satire on Victorian high society.

The play follows the antics of bachelors Jack and Algernon, who are in the habit of assuming fictitious identities in order to escape either to the town or country in practice known as ‘bunburying’. Love gets in the way of their capers, and, with the help/hindrance of an imperious aunt, well-meaning governess, enthusiastic reverend, and cynical butler, their elaborately constructed deceptions start to unravel. Hilarity, of course, ensues, and we learn about the vital importance of one remarkable handbag.

The great cast was led by an especially strong performance of Algernon by Gregory Taylor. This dynamic portrayal of the charming, laconic and playful Algy really drove the comic momentum of the play and had everyone rooting for him to get away with all his antics. Joshua Korber Hoffman played Jack with a dry wit that provided a good counterpoint to Algy’s energy, though some of the funniest parts came when he let out his childish side. 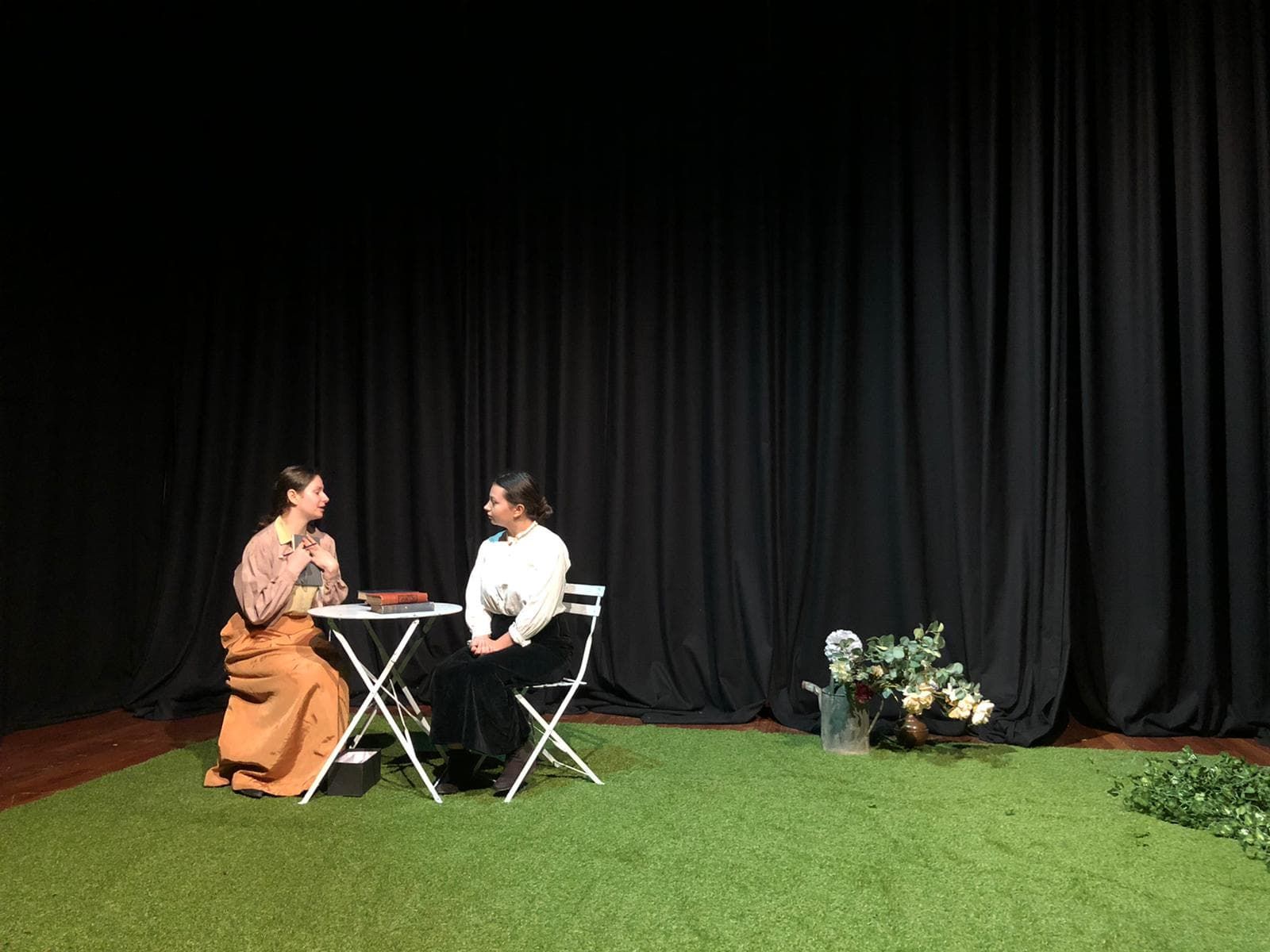 Tineke Harris’ Lady Bracknell was another stand-out performance, whose wonderful voice and commanding stage presence brilliantly conveyed the iconic and imperious character. Ella Joralemon’s performance as her daughter Gwendolen was equally strong, with an assured combination of flirtation with the sternness of her mother. Jesi Bailey did well to portray Cecily’s innocence and creative imagination, but her wry expression revealed she was not quite as naïve as first appearances would suggest.

Miss Prism (Freya Bark) and Dr. Chasuble (James Macnab) made a lovely pair, with the contrast between the flamboyance of the reverend and the strictness of the governess creating an amusing duo. Curtis Trynka made the relatively small part of Lane/Merriman his own, with his ominous stares to the audience and a lovely moment in which he sneaks a peak at Cecily’s diary really capitalising on the comic potential of the character.

The technical and design elements of the production were relatively simple, with set and lighting changes occurring only in the two intervals between acts, making each act more like one long, uninterrupted scene. Costume was similarly unobtrusive, but very appropriate, and there were some subtle touches such as Algernon’s loose bow tie and Lady Bracknell’s fabulous hat which added nicely to the characters.

The challenge of these more minimalist production choices was that this placed much more pressure on just the actors to deliver, which they mostly did, but in parts it seemed as though the script itself was being relied on too heavily for the source of comedy. In such a dialogue-heavy piece the production would have perhaps benefited from some more creative direction to infuse the long scenes with comic energy.

The first act in particular, though well-acted, was sometimes slow and needed a little more physical dynamism or prop comedy to keep things visually interesting. The same can be said of the final scene of the play, in which all the actors were standing static on stage for quite a while as all the loose ends of the plot were being tied up. Here we really could have done with a little something to help bring the play to a more exciting conclusion.

That said, the production really picked up and came into its own in the second act, with the best direction work done in the dynamic and hilarious scene in which Jack and Algernon argue over a plate of muffins. The use of props and physical comedy here was fantastic, eliciting one of the biggest laughs of the night. Also commendable was the scathing battle of wits between Cecily and Gwendolen, which used props and the space more creatively to really draw out the comedy more than just through the dialogue.

Overall, this was an enjoyable and authentic interpretation of an iconic play by director Lucy Green. Though there was nothing especially risk-taking and there were some slow, dialogue-heavy moments this highly entertaining production, is sure, as Gwendolen would say, to produce vibrations.