It is difficult to think of two sports more diametrically opposed than rugby and darts. The only similarity is that both are best watched with a pint in hand. Despite this, these are two of the sports for which Cambridge students are nominated in The Tab's Captain of the Year awards – testament to the wide variety of opportunities available in the university.

We caught up with Greg Garnett – Magdalene's darts captain – and Kate Marks – the Cambridge University Rugby Union women's captain – to talk about their sporting achievements, female empowerment, public inebriation, and a mysterious tattoo.

Kate: "No doubt about it: the greatest success was winning the Varsity Match. After all the intense build up, training every day, twice a day, it was incredible.

"There was a lot of hype around the women’s match this year, with it being the 30th Anniversary of the fixture. Cambridge narrowly beat Oxford 30 years ago, so to be able to replicate that in front of a crowd that included that original team, was pretty special." 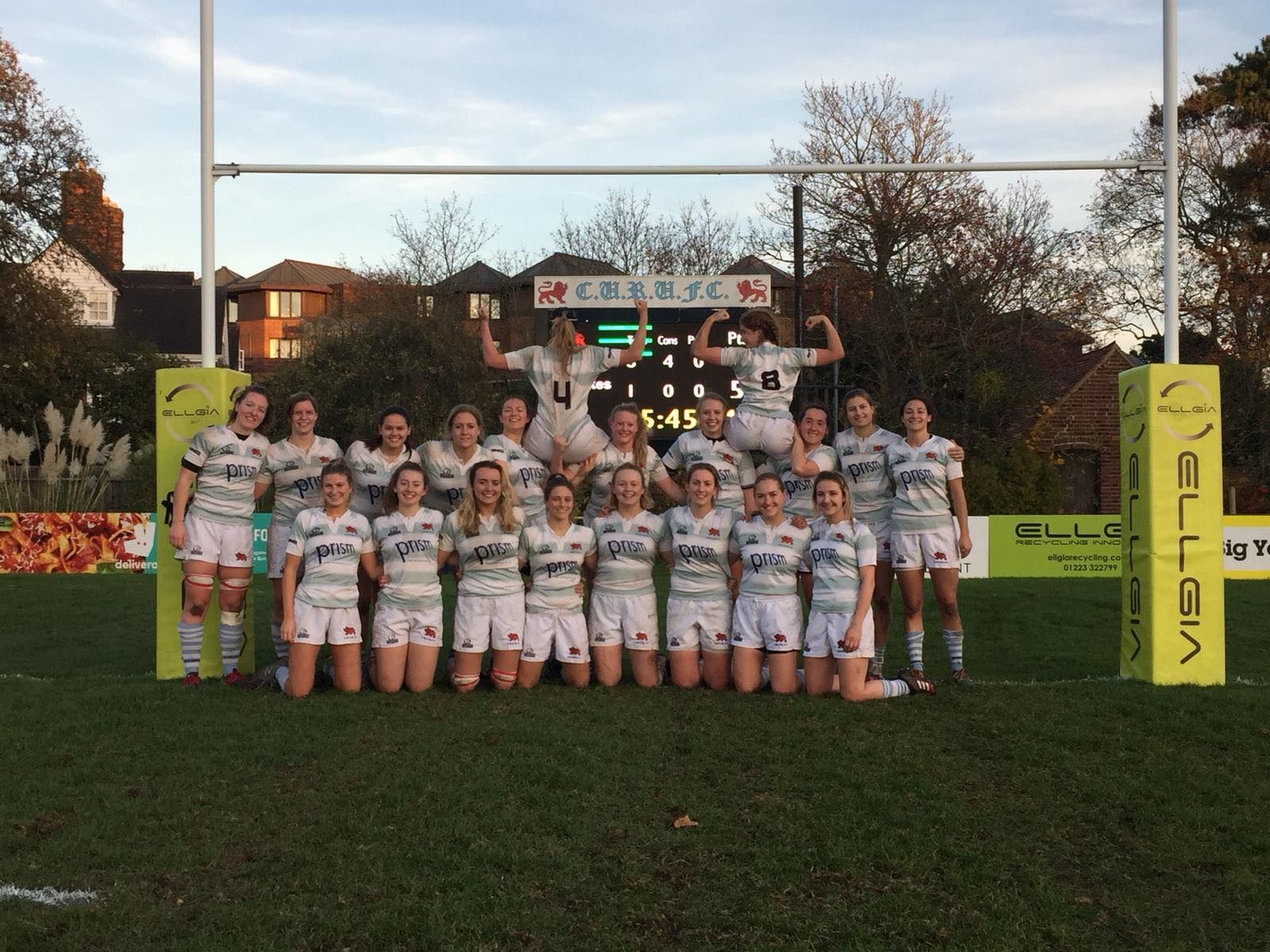 Kate and the squad in the run-up to varsity

Greg: "Where to start…the obvious one is the resounding defeat of Magdalen Oxford in January 2018, where even their mightiest players fell before our titans. Alongside that, managing to stage a darts game against Magdalen Oxford this term without any College Office support – meaning the match was held in my room, with 60-odd people in attendance – was definitely testament to the team’s commitment to the game."

What inspired you to get into darts/rugby?

Kate: "I’d always been a sporty kid – doing everything from ballet to triathlon and football – so when one of my friends at school said she wanted to start a rugby team, I just went along for fun. After that I was hooked and haven’t stopped playing since.

"It wasn’t until the Women’s Rugby World Cup in Paris that I first experienced the thrill of watching a professional game. To see women doing my sport on an international stage, and winning the world cup, made me realise just how special a sport it really is. It’s the most empowering thing I have ever done as a woman."

Greg: "I think it was when my dying dog presented me with a dart as it lay on its death bed at a youthful seven years' old: its eyes seemed to say ‘go forth and play darts, Greg’.

"That and I spend far too much time in the pub, as do many of my associates; the ‘inspiration’ was more overarching exposure. I think it’s beautiful that darts can turn going down the pub into an activity with a veneer of legitimacy". 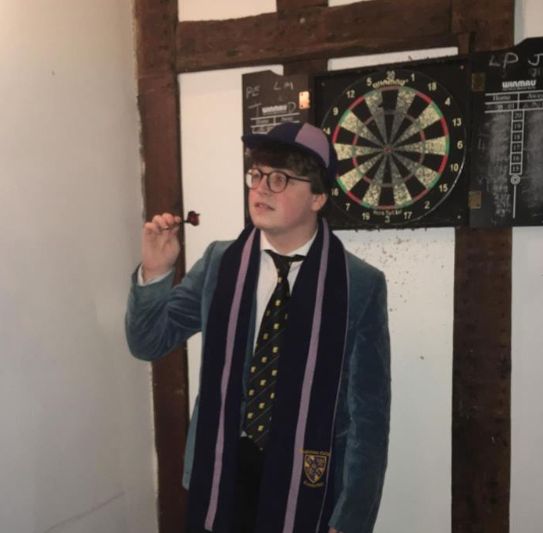 Greg in his natural habitat: the Magdalene College bar, standing alongside his trusty darts board

What has been your greatest darts/rugby moment?

Kate: "Obviously the whole experience of winning the Varsity Match and playing at Twickenham are two huge highlights. But, I think the greatest moment for me was when the final whistle blew and we all stopped and looked around at each other on the pitch.

"There was a huge sense of relief and elation, but most special for me was the sense of camaraderie; of having achieved all of that alongside the girls who I see as my family. They are my best mates, and I know how much they had given up to win that match: early mornings, missed classes, long bus rides to fixtures. We had physically given everything for each other, and to be able to share that moment with them was something I will never forget."

Greg: "The finale of the match against Magdalen Oxford in 2017. As the game neared its dramatic finish, we realised that no one was clear about how to end a darts game: even after we Wikipedia’d it. In the end, the teams agreed that the winner should be decided by seeing who could down a pint the fastest. We won." 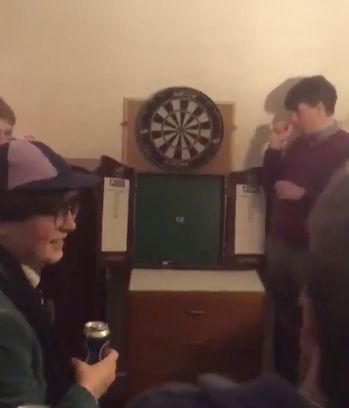 Greg, in traditional Magdalene darts uniform, coaching his team during the Magdalen/Magdalene match in January 2019

Outside of matches, how much extra commitment is required for your role as team captain?

Kate: "The commitment outside of the games genuinely takes up more time than the matches themselves!

"The rugby Varsity Match brings with it a huge level of media responsibility, sponsors events, and charity work. Outreach to the local community through our charity partners Leonard Cheshire, Sport Inspired, and Whale and Dolphin Conservation, were all key things for me as a Captain as I felt it was important to ensure we use the platform of the Varsity Match for more than just rugby!

"Training demands are ever increasing – usually twice a day in Varsity term, in order to ensure we stay physically ahead of the Other Place!

"Alongside all of this, I work with the Team Manager and Coaching Staff to ensure the day to day logistics for the team are in place, from team selection every week to video analysis sessions.

"It’s been a huge amount of work, and often I spend more hours in the week with rugby than my degree; but I speak for a lot of Captains when I say that I would do it all again without a shadow of a doubt!" 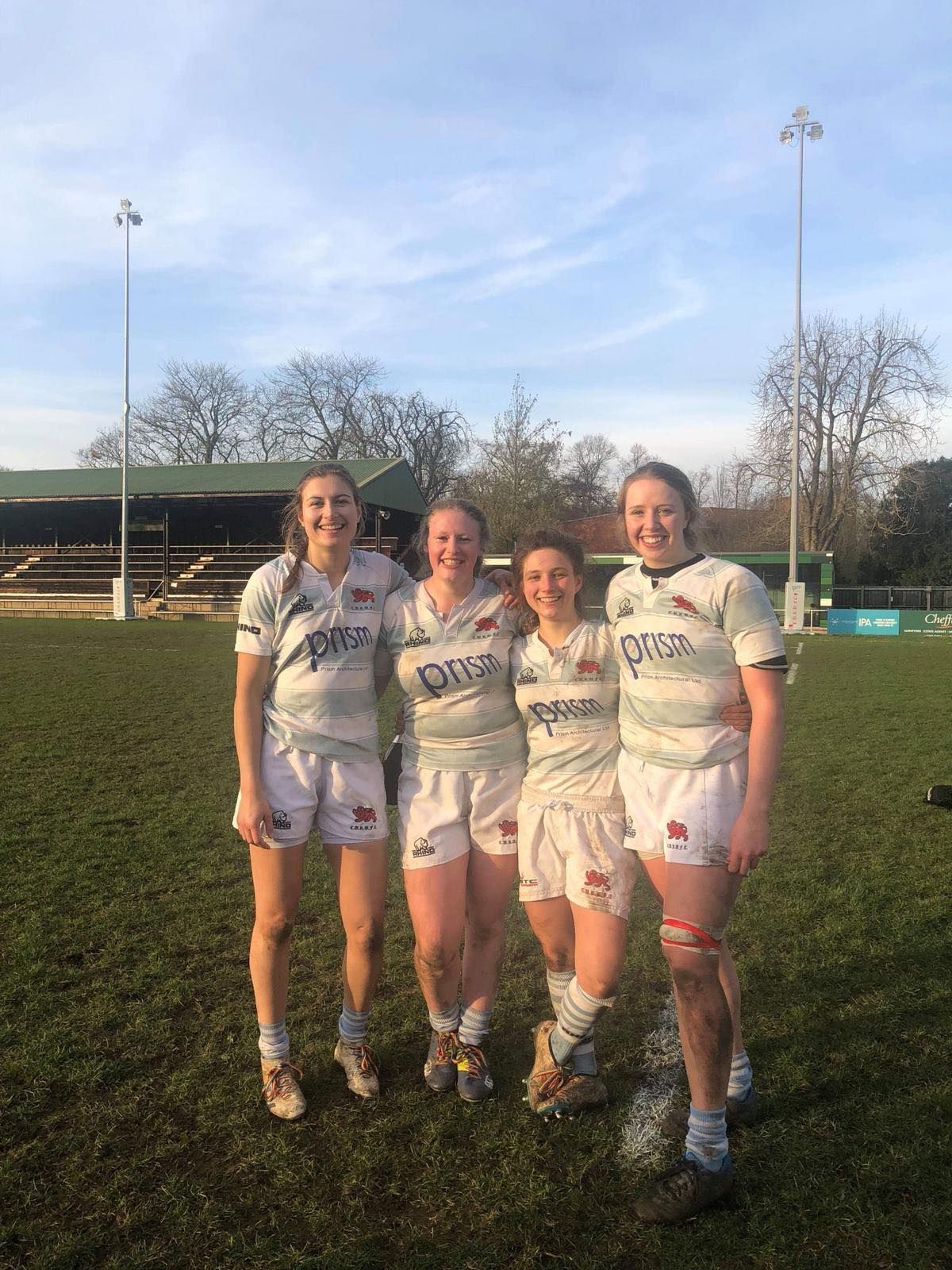 Greg: "I mean it’s a 24/7 job. Given my carpet still reeks of spilt, stale lager from the match against Oxford last month, it's hard to stop thinking about it really.

"To be honest, I’m never not with the darts: it’s a dangerous thing to have a darts board in your room. I have lost at least two classes from my degree and a lot of parental approval to pursue this. It is my everything. I don’t think I’d even drink if I didn’t play darts."

What should your fans know about you?

1) My commitment to my sport knows no bounds.

2) I proudly have 'GDBO' permanently etched onto my skin. The real question for the fans is whereabouts its located? …"

Greg: "Straight off the bat I’d question whether my fans exist. All the same, I think it’s important to know that I’m probably the worst in the team – at least bottom three. But that’s the point – we are an inclusive force for good. Only the great titans of darts can hit 180s on the reg, so the rest of us mere mortals just watch, participate and drink.

"I don’t endorse self-aggrandisement or self-indulgence in the Magdalene darts team, but I do encourage public spectacle and public inebriation (which generally to go hand in hand)." 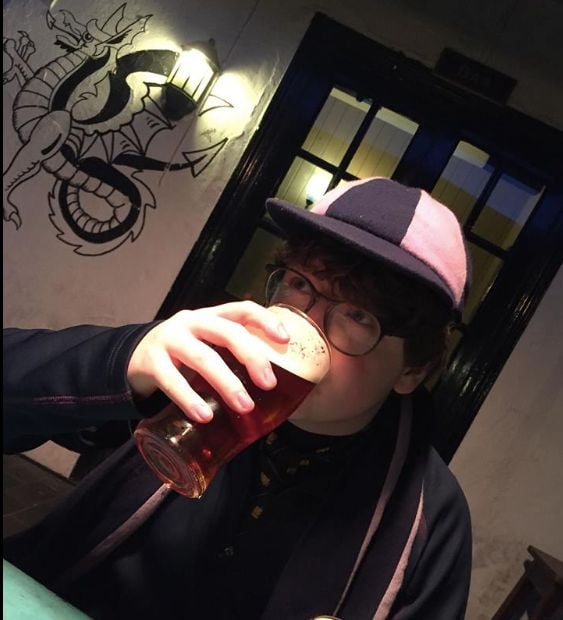 The natural auxiliary to the darts match: the pint

Why should you win Tab Captain of the year?

Kate was too modest to answer this question, but three of her teammates stepped up to the challenge.

Sydney: “Kate is, in a word, incredible. Not only is she a gifted athlete, a fierce leader, and a tireless advocate for women in sport, but she is also the best friend you could possibly ask for. Her determination and passion for this team and this sport has not only led us to victory at Twickenham and an undefeated BUCS season, but that’s not all. She has created a family. I may be an ocean away from where I grew up, but because of what Kate has created at CURUFC, I have found a home.”

Sophie: "Kate has positively influenced so many players on and off the pitch, by even her most modest of gestures. Everything she does puts our team first."

Elisha: "Kate is the driving force of the team, always being the first to turn up to training and the last to leave. She is determined to see the team thrive and is encouraging to new players, leading to us double in number last term. Kate also knows the importance of looking after players off the pitch, as well as on it, and is always checking up on her team."

Greg: "We are a more accurate and fair representation of the average student – spending most of our time avoiding deadlines, sitting in the pub – than any of the others. I think it’s time for a humble sportsman and humble sport to achieve the pinnacle of national recognition, which they have for so long deserved, through The Tab Captain of the Year.

"Plus, if you vote for me I’ll buy you a pint and let you join the team. If we win we get funding, I plan to put 95 per cent of the winnings behind the bar at the Pickerel Inn, where Cambridge students holding a University card can get a free pint." 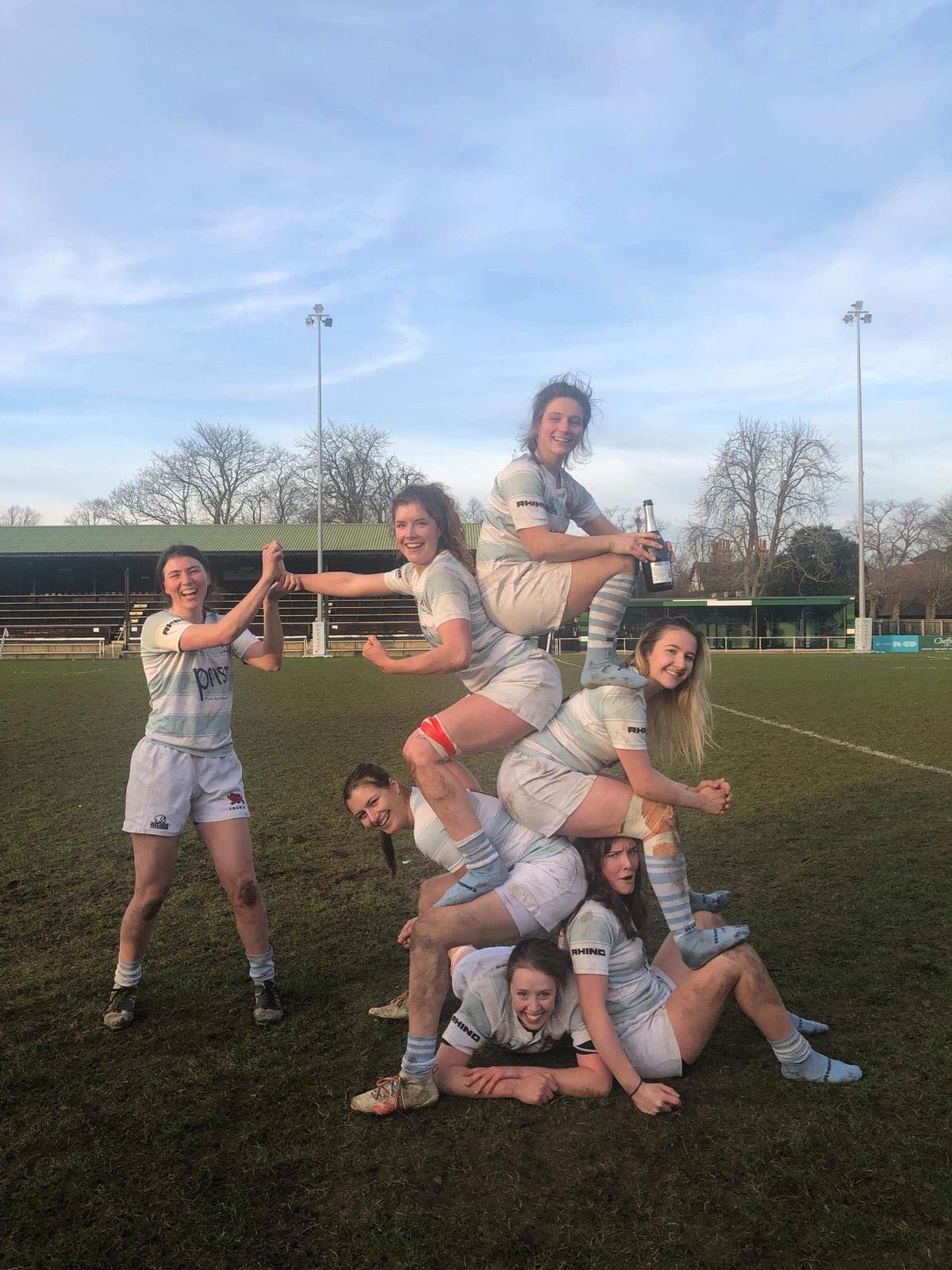 It is safe to say that Kate's and Greg's sporting experience are vastly different. But they are both committed to their teams and this is what is important in a captaincy.

There are a number of other Cantabs in the running – vote here for the person you think is most deserving and make sure that Cambridge beats the Other Place. GDBO.