There are now only five colleges implementing the ‘archaic’ accommodation system

As of yesterday afternoon, the fellows of St Catharine’s College voted to abolish the Scholars’ Ballot, a decision which will come into effect this term and impact room allocation for current first years.

The vote followed a college-wide referendum run on the 19th November 2016, where 40% of undergraduates voted.  64% voted in favour of Catz JCR moving towards a system of room balloting that does not favour scholars.

A ‘reverse flip’ system will now be used to allocate rooms for the first years, involving a randomly generated ballot for second-year accommodation which will then be flipped for third year, with those at the top of the ballot moving to the bottom.

JCR President Dylan Carroll commented: “I would like to extend my thanks to my predecessor, Arnav Kapur, and our current Accommodation Officer, Jack Kleeman, for all of the work that they put in to make this happen. This is a landmark change for the JCR in its accommodation system, and the Committee is proud to see the wishes of the students materialise in this motion.” 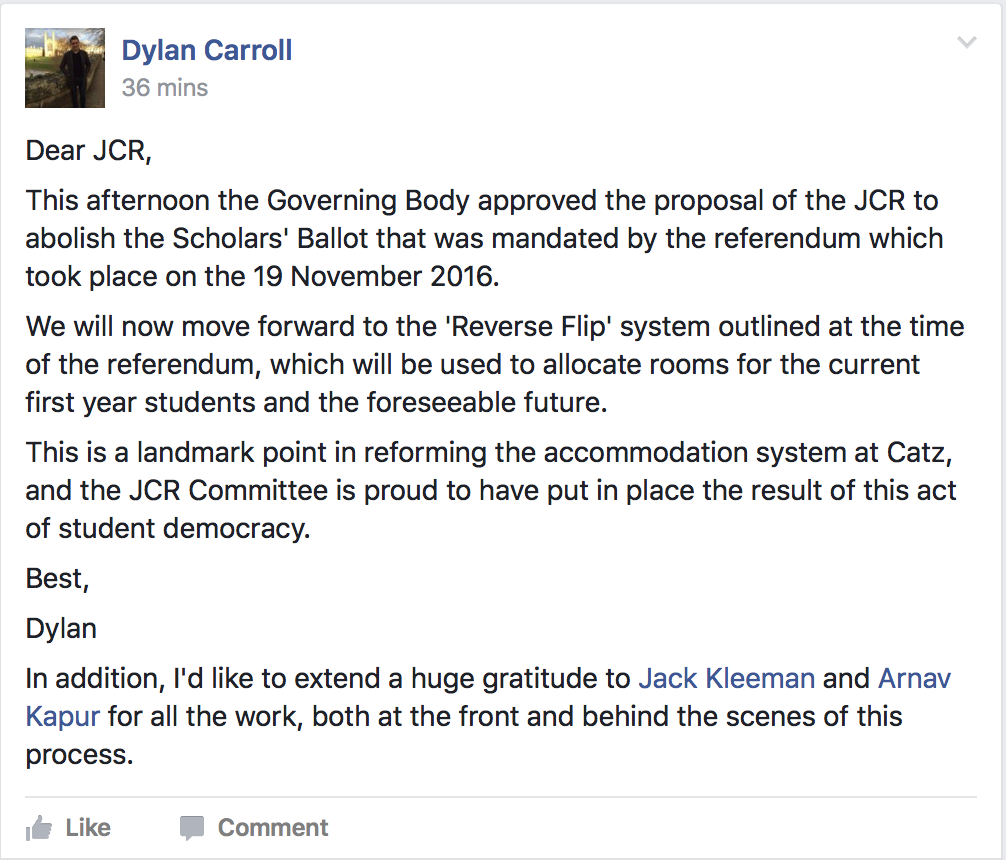 Before this momentous decision, Catz was one of only six colleges which still implemented a Scholar’s Ballot of some sort, with the other colleges being Trinity, Christ’s, Pembroke, John’s and Peterhouse.

This result is being celebrated by many Catz students, with some seeing this as a victory for mental health awareness and a move away from prioritising purely academic achievement. Second-year historian Maddy Rennie opined on the decision: “the abolition of the ballot is a positive step in prioritising student welfare and wellbeing over tradition and archaic practice.”

However, not all students were happy with the decision, with one Catz student describing it as “a real shame [having] lost this part of college life” and “a victory for mediocrity.”

When questioned on the outcome of the vote, Senior Tutor and English Fellow Paul Hartle stated that “although I abstained on the vote, I am entirely content with the Governing Body’s decision.”

‘Did he stop me because I was black?’: Speaking out against everyday racism in Cambridge

A brief history of everything tragic James Arthur has ever done

Remember when he was dropped for being a homophobe lmaoooo