Ridiculous, witty and funny, Sayana enjoyed her evening in Spilt Milk (although not literally, because that would be gross…).

If the ridiculous could be contained in a swimming pool of milk, then this play would invite their audience to dip their toes in the edge, before sneaking up behind them and pushing them head first into the dairy depths.

If you’re confused by that statement not to worry, the actual play is even more bemusing. Spilt Milk is a bizarrely amusing spy parody blending utter fiction and contorted reality to show a tale that makes about as much sense as a milk-made apocalypse and is definitely good for some late night laughs after a few drinks.

The script was witty and blunt, with current jokes and references nicely incorporated. It was definitely one of the biggest contributors to the comedy (well done to writers Colin Rothwell and Haydn Jenkins). A distinct style was apparent in the way each part had been distinguished through various unusual behavioural traits and accents, which was carried off surprisingly well by a mere three actor cast.

The fourth wall was regularly broken, in fact by the end of the play it was basically a pile of rubble. In general, the whole style of presentation and script was casually comedic, with many pho-serious moments and unsubtle cultural references.

Macy Johnson as the oh so self assured leading lady and narrator of the story was acted with confidence by Kate Marston and any awkward moments on stage fitted with the style of the performance. What was really unique and added a lot of humour though was watching Macy interact with a constantly changing cast of characters all acted by Mark Bittlestone and Louisa Keight. The two thesps rushed surprisingly well from accent to accent, costume to costume, and even managed some distinct physical contrasts between their various roles.

The production and set had quite a low budget, low maintenance appearance, though this arguably increased the effectiveness of the intended spy genre parody. Despite an awkwardly late start due to technical difficulties, it was honestly a well-executed spoof carrying out an imaginatively funny plot overall. 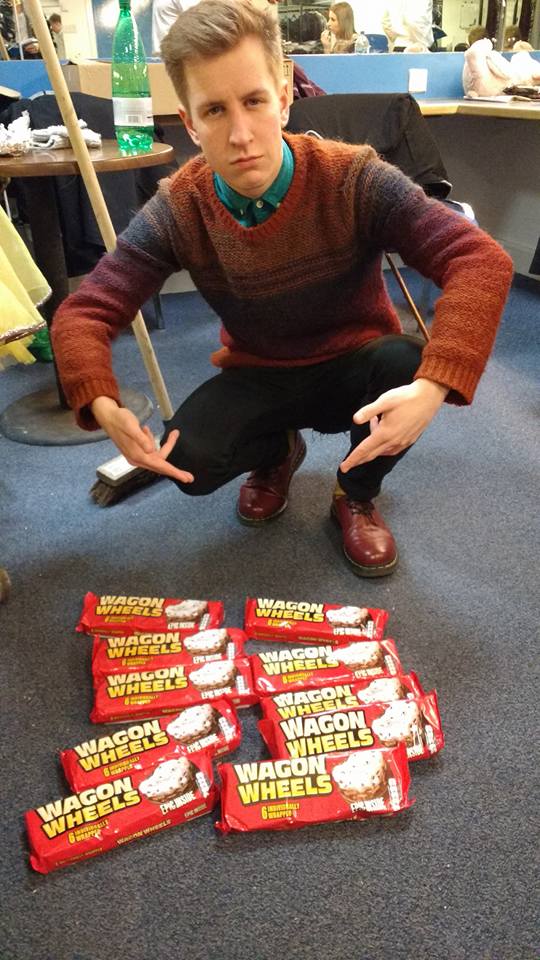 and you even get a wagon wheel…

This impression was strengthened by the well timed, very 21st century sound and visual effects. These brought to life various amusing additional features from secret service tracking complemented with Facebook stickers to a fight scene in the style of a retro videogame knockout.

The show contained an array of unusual humorous details and I imagine that many ‘very serious’ brainstorm sessions were used to create these moments. But the flow could have been better and the whole production could have felt a little polished. However, ultimately this wasn’t a huge issue as the style was casual and ridiculous at the end of the day. Anyone who wasn’t hugely engaged at the offset definitely got more into the humour as well as the surprising plot and character twists as the story went on.

Spilt Milk is a decidedly funny show, worth seeing if you’re in the mood for something current in its humour ,and parody meets absurd in its subject matter.

In a challenging year, many students felt the departments and faculties should have done more to support student wellbeing and academic progress

30 students of Black or mixed race heritage will each be awarded a £20,000 scholarship over the next three years

The government is also discussing the possibility of different fees for different courses, and minimum qualifications for enrolment

This will be for an incoming student in the academic year 2021-22, whose tuition fees and maintenance costs will be fully covered by the scholarship

The petition expresses alarm that Cambridge, ‘it seems, is more than willing to sell its soul for UAE’s dirty money’

‘It’s a matter of streamlining your creative priorities, what you think is most worth your mental and creative effort and your time’

With 432 people testing positive for coronavirus in Cambridge between 29th June and 5th July, the council stresses the importance of getting vaccinated

The college has no intention of patrolling the riverbank in the meadows, and has stated that no action can be taken against swimmers there

Because yes, you have not yet seen enough of everyone’s disposable camera photo dumps

‘Anyone is welcome’: Meet Georgie Windsor and the Cambridge University Witch Society

Despite the heavily gendered and stigmatised term of ‘witch’, Cambridge University Witch Society is a safe and inclusive space for all

Looking for proof that Cambridge students are amazingly stylish, colourful and unique? Look no further…

Petition to ‘keep access to the river at Grantchester Meadows open to all’ has over 17,000 signatures

They are udderly captivating 😉

The College will host a subsequent clinic on 17th and 18th July, which will be open to the public

A fifth of applicants won’t get their first choice uni

Chuggs is a well connected man

Love Island Gossip Column: Lucinda and Brad are an item! And Chloe wants Toby back too?!

Only 67 per cent of young people have had the vaccine