DO ONE DAVID WILLETTS: Cambridge students tell Uni minister to ‘Fuck Off’

Controversial Tory Uni Minister David Willetts has been told to ‘Fuck Off’ by students at the Cambridge Union Society this evening. 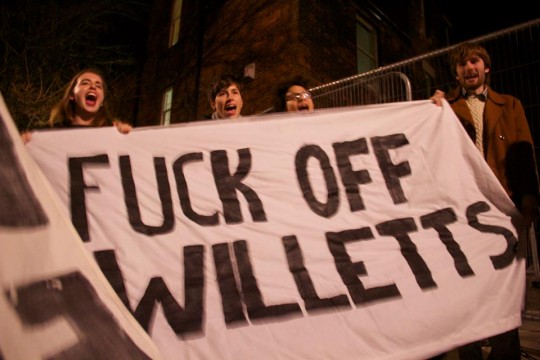 Conrad Landin and Tab columnist Jessica O’Driscoll-Breen lifted up a banner which read ‘Fuck Off Willetts’ within the first five minutes of his speech.

Audience members tried to get the protesting pair to voice their opinions but they were hustled out by security. Some students applauded the two as they were taken out the chamber. 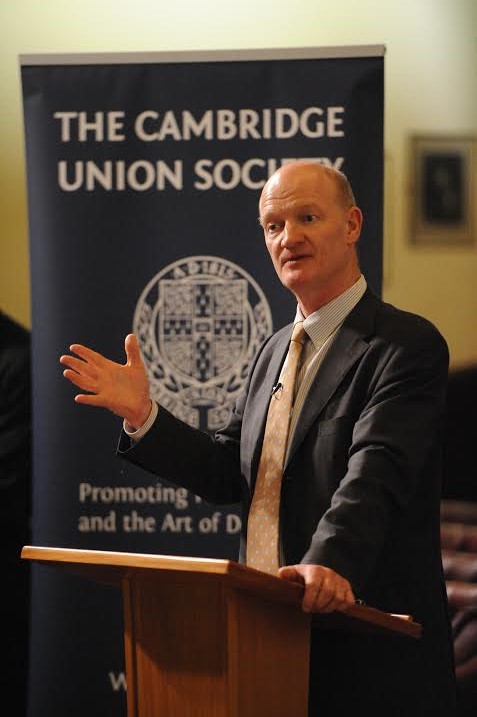 Willetts speaking at the Union on Friday

Allegedly security found the banner on one of the protesters during a full body search, but were convinced by her claims that it was a back-brace.

Imogen Schon, the Union president issued a stern warning before the talk saying that disruptive students would be removed after being asked to desist twice.

The banner that used closely replicated the one unfurled by Oxford students when Willetts spoke at their Union last October. 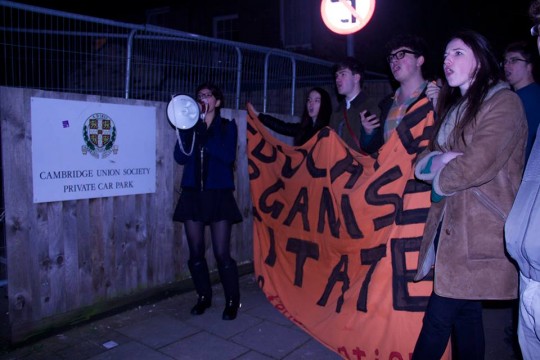 Security at the event was disproportionately vast. Phones and bags were confiscated from everyone attending.

The event was ticketed due to an anticipated capacity crowd. However the chamber was less than half-full and security seemed to outnumber students.

Students from Cambridge Defend Education protested over cuts to higher education and the Government’s programme of privatisation. Their protest chants echoed through the empty chamber while the Uni Minister spoke.

Students chanted ‘no ifs, no buts, no education cuts’ and ‘you say cut back, we say fight back’. The classic ‘David Willetts, Fuck Off’ was also heard.

Imogen Schon, Cambridge Union President said “the protestors clearly had a lot to say and a lot to challenge him on but they didn’t participate. I think it’s sad.”

Willetts started his speech jokingly saying, “thank you for braving your way through the security cordon.”

In his speech Willetts defended his policies, describing them as a “good, fair, progressive and morally defensible way to run our education system.”

He said he is “very willing to engage with any critics.” 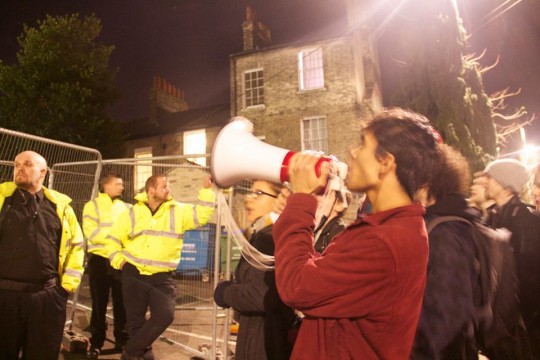 When asked about students who have been put off applying to uni because they think they cannot afford it, Willetts responded sarcastically saying, “Do you think they are correct about this?”

A member of CDE said, “the point of this protest is that we have come here to say that we won’t play Willett’s game. The Union’s concept of free speech is bogus and simplistic.”

The Union declined to release their pictures of the banner being unfurled, saying that they valued the protection of their speakers over giving attention to protesting students.