Welcome back to episode 37 of Wes and Megan's break up!! Last time, we found out that Wes had unfollowed Megan on Insta and instead followed a bunch of models who look like her. But on this episode, Megan outs Wes as "fame hungry" and says he never loved her. Ouch.

In an exclusive interview with OK! Magazine, Megan said: "Our ambitions and goals in life are very different – Wes is younger than me and wrapped up in the fame bubble – but I still love him, which is why it hurts so much."

So excited to show Wes around Essex 🤪 – Tune into Love Island Aftersun: The Reunion Show on ITV2 Sunday night at 9pm. ❤️

Wes has apparently moved out of the flat they got together last year and hasn't been in touch about the hamster, Jon Snow.

"Wes hasn't even called to find out how he is! I suppose we'll have to have a custody battle for him." Megan added.

I mean, this is the reason everyone loves Megan Barton-Hanson. She's your every-girl going through a difficult break up, and she's being very honesty about it.

She's gone on loose nights with her friends since the break up, taken off her shoes in the club and twerked on a stage AND she's shown us all this on her Instagram stories. 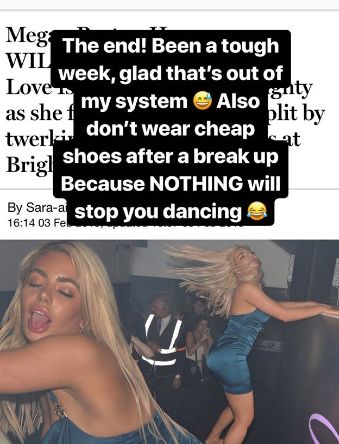 There's been a lot of drama involved during this break up. Here's the full recap if you've just tuned in: Megan called out Wes' dancing partner for existing on Instagram, then she did it again, Wes and Megan broke up, the break up post was identical to Gwyneth Paltrow's, Megan joked about finding a new boyfriend, people thought they didn't actually break up and then sources said Megan dumped Wes because he was too tired to have sex with her.