Megan and Wes are still together and this is the proof

They’re playing us YOU GUYS

In what we can only call the biggest celebrity break up since Brangelina, Megan and Wes have finally called it quits after being together for slightly longer than my Year 10 relationship. Or have they? 👀

Because I am convinced they are still together and the proof is in front of our very own eyes. We're just ignoring it. What normal celebrity couple breaks up and posts memes about their hamster, rather than going radio silent on Instagram for a few days?

Think about it, Megan and Wes are just playing the press, playing us and having a very big laugh about it behind the curtains. Any press is good press right? And even a body language expert thinks they're still together.

Spending a couple of days away in Ireland with @meganbartonhanson_ Last night was Enniskillen, today we’re on our way to Belfast and tomorrow we’re getting on the Guinness in Dublin! 🤪🍺

Seriously, here's all the proof the famous Love Island couple is still very much together:

Firstly, Megan copied Gwyneth Paltrow and Chris Martin’s famous "conscious uncoupling" statement on Instagram. In it, she said she wanted people to respect the privacy of their hamster at "this difficult time." Which obviously started all the hamster memes.

Secondly, Wes hasn't even reacted to the break up post or posted an official statement on any of his social media accounts. Instead, he's been making references to the hamster memes and asking people to vote for him on Dancing On Ice. 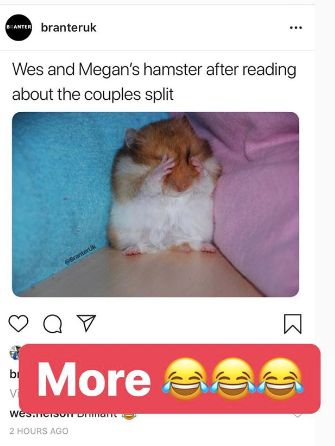 Meanwhile, Megan has been making jokes about finding a new boyfriend already?! Is this not the woman who started on Wes' dancing partner for existing???

If you've just broken up with someone, the last thing you'd want to do is go on Dancing On Ice, just to see them perform a dance with another woman. I repeat, this is NOT how Megan Barton-Hanson would react to a break up, under any circumstances.

Wes hasn't even formally addressed it

In the past, all Love Island couples have formally addressed their break up on their social media accounts. Sure, it's usually written by their PR team, but at least there's a level of seriousness attached to it. Where was Wes' Insta post to announce their break up??? I just don't buy it.

Maybe he's keeping it up out of respect to their relationship, but most likely he hasn't even thought about it, because they're not broken up.

Dancing On Ice, like any other dancing show, isn't exactly Love Island. It would make sense for the producers to want to attract a younger audience.

Gemma falling (diving) on the ice last night. The whole Vanessa and Megan argument. Vanessa mysteriously breaking up with her own boyfriend. Megan and Wes breaking up. I don't want to sound all tin-foily but all of these things have probably resulted in people being more inclined to watch the show, purely for the drama.

After Megs announced the break up, she said she was still going to the live show. People are obviously going to tune in to the show just to see her in the audience and inspect her body language.

After Jani broke up and got back together in a day, I don't trust anyone

Remember when the winners of Love Island announced their break up and got back together immediately? Do you also remember that this weirdly coincided with the announcement of her Dani's new book? And also the beginning of Jack and Dani's new show? How convenient.

These ex-Islanders need to realise the public isn't stupid and our patience is wearing very thin. So yeah, if we could stop with all the fake-ups that would be great.