A red alert for severe winds in St Andrews of up to 70mph has been issued by the Met. Office. The Stand will be bringing you live updates of the downpour, the […]

A red alert for severe winds in St Andrews of up to 70mph has been issued by the Met. Office. The Stand will be bringing you live updates of the downpour, the drama and the destruction (yes, it really is that bad) in St Andrews. To send us news or photos, just email [email protected] or contact us through Facebook or Twitter.

22:30 – All quiet on the Western front. Just the occasional gust. If things pick up tomorrow we’ll be back. At the moment, however there is light at the end of the tunnel as the Met. Office is predicting relatively minor winds of 40 mph.  Over and out.

21:00 – The stand has been told that a certain Garrett Turner created quite a storm at this evening’s A Cappella Christmas Concert.  His rendition of You Are the Best Thing blew quite a few ladies way.

20:45 – The Forth Road Bridge has reopened. Escape from Fife is now possible.

19:50 – According to the BBC, the storm should start to calm down later tonight. In our area, the winds will be replaced by ice, frost, and maybe even some snow showers. Oh joy.

19:30 – The gates to St Salvator’s Hall have been locked due to a tree that’s fallen across the driveway. Keep sending us your Hurricane Bawbag updates!

19:00 – The boys and girls of Dundee University have taken this amazing satellite snap of the Bawbag.

18:30 – Power outages reported across St Andrews. Time to get cosy by the Central’s fire.

18:15 – The the Met. Office expects the storm to begin to blow itself out between now and 21:00. Little sign of that so far. In other news: Tesco’s chocolate supplies have now reached critical levels.

18:00 – We have just had word that tonight’s A Cappella Christmas Concert is still on. All is not lost!

17:30 – Although not technically a news update or St Andrews related, this is still well worth a peek.

17:00 – Joe Fleming has shared a weather-related joke with us, “The University Library is closing at ten o’clock this evening due to the inclement weather. They obviously don’t want a dewy decimal system.” Feel free to improve on this.

16:30 – Albany Park’s power is down. With reports of electricity supplies being affected we are being told that candles and tinned soup are starting to sell out in Tesco. An impromptu peformance of Bob Dylan’s Shelter from the Storm has been heard off South Street.

16:15 – What with the Tay Bridge and Forth Road Bridge being closed, we are all being held captive in Fife! Columnist, Jamie Ross‘s flatmate was going to go to Edinburgh but is now trapped in St Andrews. Commenting on her tragic story Ross said, “I am making her watch all of the five adaptations of A Christmas Carol which I own. We have watched the Muppets, we are on to Jim Carrey.” Stay tuned for updates… 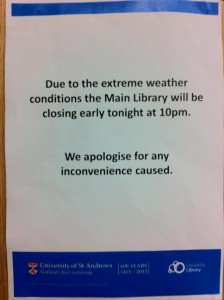 14:00 – Tiles have been blowing off house roofs all across St Andrews. Please be careful walking around! 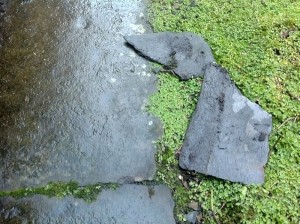