Our play, ‘Art’ by Yasmina Reza, goes up in a matter days. Instead of wasting my insomnia on worrying about wallpaper and get-in times, I have decided to do something […]


Our play, ‘Art’ by Yasmina Reza, goes up in a matter days. Instead of wasting my insomnia on worrying about wallpaper and get-in times, I have decided to do something more productive: this (stop laughing). Here is a little sneaky peek behind the stage curtain…

‘Art’ revolves around three old friends, one of whom blows a lot of cash on a painting. A white painting, with white lines. As he says: ‘You could say it’s very pale.’ His friends just don’t get it. One pretends to get it; the other simply refuses to. They argue, and it quickly becomes apparent that there is more to their anger than just art. The crisis triggered by the painting unravels their ailing friendship, their inability to empathise, and their own selfishness.

Like the painting itself, the play has grown to signify something more than meets the eye. What started as a three-actor comic play on a white stage, with its deceptively accessible themes of ‘friendship’ and ‘art’, has morphed into a dark, complicated, sinuous piece of theatre. Imagine trying to untangle a knot in a silver chain; that’s what we do in every rehearsal. 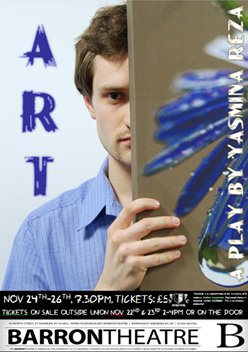 This project was born out of a combination of frustration, greed, and convenience –like the recurring themes in our play – yes, this is how I talk about my life now. Deal with it.

Frustration at the lack of plays going up in St Andrews this semester; greed for the need to direct something  with the people I respected and in the way I wanted to;  convenience, because the play suits the Barron theatre, there were a bunch of free rehearsal spaces, and it was 2p on amazon. Not romantic at all, I’m afraid, very much a Marriage à la Mode. But I have grown to love it and love working with the team. As the director, my main priority is the actors. I have high-minded principles about the treatment of actors: cast talented, open-minded people then exploit their creativity and pass off their fabulous ideas as your own. We do A LOT of talking in our rehearsals, and I highly doubt that the play could function if we had actors who were less able to contribute. Every discussion reveals a new insecurity or frustration or dark joke. In many ways, the actors have completely changed the way I perceive the play.

I also discovered that ‘productivity’ has a different meaning in the rehearsal process. I can spend a two-hour rehearsal blocking three scenes, or I can spend a much more productive, two-hour rehearsal where we don’t even look at the script. There is a particular rehearsal that has become infamous in our group, where we spent the whole time on improvisation, culminating in a half-hour long piece, which they claim is the most useful thing they have done yet. It was pretty cool: I just sat there, a fly on the wall, listening to a three drunk friends talking about love in the wee hours of the morning.

I don’t feel so afraid of letting go of the rehearsal now, seeing where experiments take us or don’t take us. Hey, ultimately theatre is an art form; inspiration doesn’t arrive by Fed Ex, and Rome wasn’t built in a day.

[Art will be independently reviewed by the stand]

Tickets are £5 and can be purchased outside the Union:
Tuesday 22nd 2-4pm
Wednesday 23rd 2-4pm
Or will be available on the door.
Tickets can also be reserved by e-mailing [email protected]
The time of the performance is 7.30PM

Written by Beth Robertson, director of ‘Art’ and standing-room-only writer