Including a 12-year-old boy

The turn of 2020 has seen a worrying spike in the number of shootings in Sheffield.

Police have recorded five shootings in Sheffield in the first half of January, with the latest seeing a 12-year-old boy rushed to hospital after being shot in a drive-by on Sunday.

The horror scene in broad daylight saw a gun fired from a car while the child stood outside a shop with his mates on Errington Road, in the Arbourthorne area. Detectives believe the boy was an "innocent bystander" to a feud between rival gangs.

In what police described as a horrendous crime, he was taken to hospital for an injury to his leg in the shooting and remains in a stable condition. With no arrests yet made, residents have convened a public meeting on Wednesday.

Enhanced police patrols continue on the Arbourthorne estate in Sheffield following Sunday’s shooting of a 12 year old boy in the thigh and parents demanding action on crime and disorder with a public meeting next Wednesday @BBCSheffield pic.twitter.com/Rtf8FQMMxc

This comes after two shootings in one night on Saturday. A gun was fired on Ecclesall Road just outside the cocktail bar Kettle Black at 11pm. Luca Premi, 24, has been charged with possessing a bladed article and a handgun.

Just five minutes before the shooting on the popular student road, police raced to a reported shooting on Northcote Avenue, in the city's Meersbrook area. 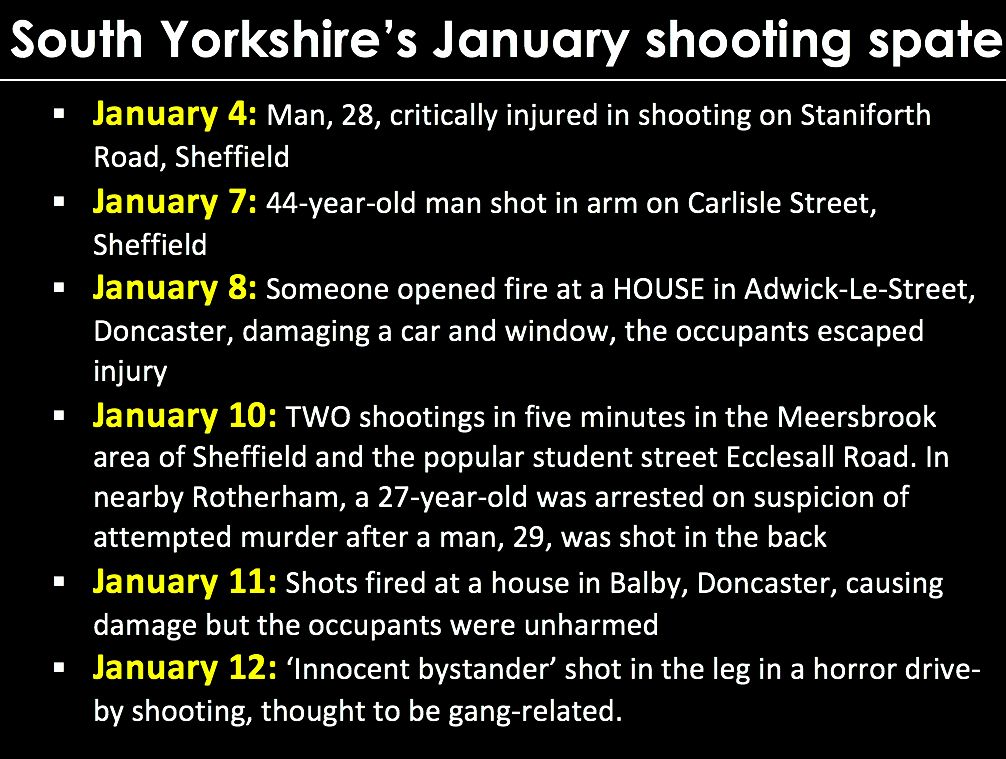 On January 10, a man was left fighting for his life after being gunned in his upper body on Staniforth Road, near the Woodbourn athletics stadium where Hallam and Uni of teams train.

Across South Yorkshire, eight shootings in as many days have struck Sheffield, Doncaster and nearby Rotherham, leaving residents fearful.

South Yorkshire police have urged anyone with information relating to any of the incidents to call 101 or Crimestoppers.

They are set to protest

The uni is investigating

Police have confirmed the assault