It is currently unclear as to what these security concerns are

A talk by Nick Clegg at the University of Sheffield has been cancelled due to "security concerns", Sheffield Young Liberals have announced.

The talk, which was due to take place on the 18th October, was to be a Q&A with the former Liberal Democrat leader and Sheffield Hallam MP hosted by the Sheffield Young Liberals society. 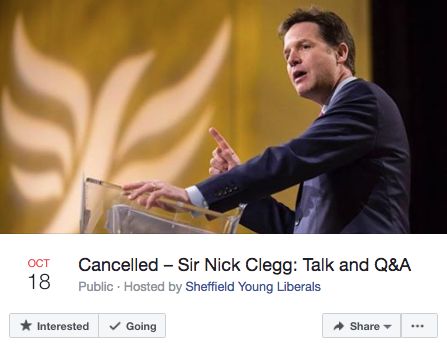 In an announcement on Facebook, the former Chair of the society, Tom McGrath, said: "Unfortunately, due to security concerns, the event with Nick Clegg has had to be cancelled.

"We're sorry to all those who wanted to come along – we're sure that the event would have been a fantastic one regardless of your political views – but after lengthy discussions with both the SU and University we had no option but to cancel the event."

They added: "Rest assured, we have a lot more plans for the year so keep an eye on the page to find out more."