After the FloBo rape ‘joke’, UoN must protect its students, not just its reputation

Yesterday morning, a note written in toilet paper was left on the floor of a shared bathroom in Florence Boot halls saying “uni girls <3 rape”. A photo of the message was taken on Snapchat and shared around until Victoria Scandlyn took “it into her own hands” to share the incident on Twitter. Since then it's been covered by the BBC.

The university haven't expanded further on how they are dealing with the incident other than that they “have launched a full investigation into who placed it there”.

However, we need more from them than them to merely investigate who did it. We need them to take definitive actions to make sure the culprit is caught, that an incident like this never occurs again and that the females on campus, especially in Florence Boot hall, feel safe again.

In an email, Nottingham Uni warned the FloBo JCR not to discuss what had happened with "ANY" fellow students or media. They were told to inform the uni if they were contacted and by who so they "can flag them/their publication up to the senior team", which sounds more like a threat than reassuring words. Otherwise, FloBo students tell us they haven't received any further communication on the matter from the uni. 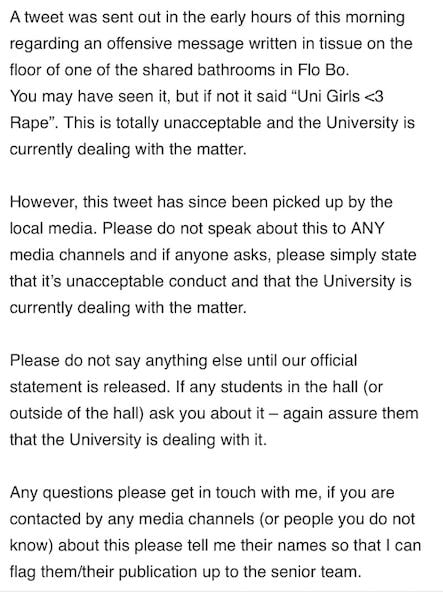 The email sent to FloBo JCR

It's made other students feel they can't speak openly about what has happened in their halls. One FloBo fresher we've spoken to told us it's "extremely upsetting to me that I can't fully share this info with you."

Largely the responses to the Twitter post are condemning the act, but some are saying that the incident “looks staged” and not to worry because it is likely “just a one-off piece of moronic stupidity”.

it does look like a woman did it to create a story tbh, that's waaaay too much effort for a guy 😂

As a female fresher, I feel as though my safety on campus has been compromised, regardless of the validity of the incident. Actions such as these normalise rape and rape culture and should have no place at any university in this day and age, let alone one of this reputation.

I couldn't imagine being a female resident in FloBo after this; what it must be like to feel unable to leave your room to do a basic function such as use the bathroom.

Yesterday evening I made a conscious effort to make sure my door was locked before I went to sleep, something I hadn’t done previously for the entire year. To know that there are people walking around campus with these disgusting views is frightening. Walking around campus I feel as though I am unconsciously wary of those around me, could they be the culprit? I should not feel this way in my own campus. The university should be doing all they can to make the females on campus feel safe.

FloBo freshers agree, with Lizzy Woods saying: "It’s absolutely disgusting, and girls in FloBo have said how unsafe it makes them feel. I can’t believe someone thought this was an at all acceptable thing to write, it makes me so angry".

Alongside the anger, Lizzy hopes the uni find, and follow through on dealing with, the culprit. "I want the person who did this to be caught and expelled. We can’t allow this to go unpunished," she says.

When asked about the incident, Queenie Djan, president of the university's feminist society, told the BBC she was "disgusted and angry, but a part of me is not completely shocked" as "this isn't the first time views similar to this have been expressed," saying that "there have been abundant complaints about sexual harassment at our uni and these are falling on deaf ears. I feel the uni isn't taking enough steps to combat views like this."

In response the university said: "We absolutely refute these claims. We take all allegations seriously, carry out investigations and take action where appropriate. We encourage students to report these types of incidents to us so we can continue to tackle and challenge inappropriate behaviour." Which they publicly reminded everyone of via Twitter shortly after the incident was posted on the site.

What makes this even more frightening is that this isn't the first incident of this matter that has occurred across the country recently, with the same response pattern. After 11 boys at Warwick were suspended for making rape threats towards fellow students in their group chat, their Students' Union attempted to silence students and staff. 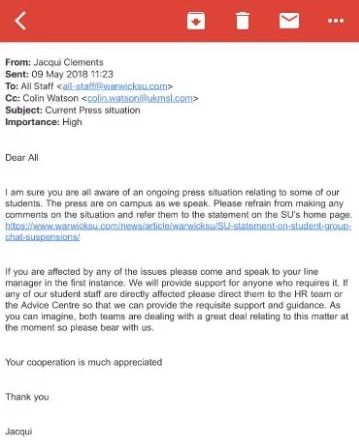 Similar to the email sent by Nottingham, it warned against speaking to the press, and instead asked that they simply show people the SU's statement. Unlike the Nottingham email, it actually offered support. A student at the time said: "Silence is normalising too and I'm not going to be quiet about this because it needs a fucking reaction and it needs to change".

This afternoon, the SU released a statement, saying "the safety and welfare of all students is the Students’ Union primary concern and this shocking hate crime in halls is totally unacceptable." It pointed students towards places they could report incidents and get support.

It's reassuring, but it's what the uni should have done straight away, not almost 24 hours after the incident and after warning students not to talk about it.

Students need to feel able to talk about what has happened, how it's affected them, and they need to react. UoN quickly and publicly announcing that they're investigating is good, but not trying to silence students would be better.