Fallowfield is a dangerous place for a bunny

Anyone who’s been in Manchester the last few weeks knows that it’s been a bitterly hostile environment: 10 days of constant rain and hail, wind tearing through you like freshers flu through Oak House. It’s. Been. Awful.

Certainly not the place for a poor lonely rabbit named Phil. 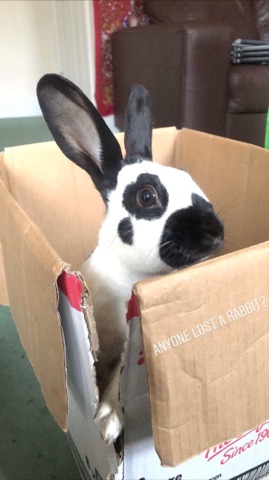 The bunny, clearly a not a wild creature, had taken shelter under student Marion Delétang’s car. She quickly enlisted the help of some passing bin men and her housemates to rescue the rabbit and brought him into her house.

Asked how he got his name, politics student Anya told The Manchester Tab: “When they were catching him my friend had to miss a lecture with a fit lecturer called Phil.”

Wondering how such a vulnerable creature had got free, the housemates posted to FSG and put letters through doors, looking to find Phils owner.

“FOUND PET RABBIT in Victoria Park (in our driveway on Denison Road), the post read. “Took him to the vets and he doesn’t have a chip so we’re looking for his owners (and proof that they are, in fact, his owners). Would post a pic but I’ll ask the owners to describe him as evidence.

“We love him, help us find Phil’s home.” 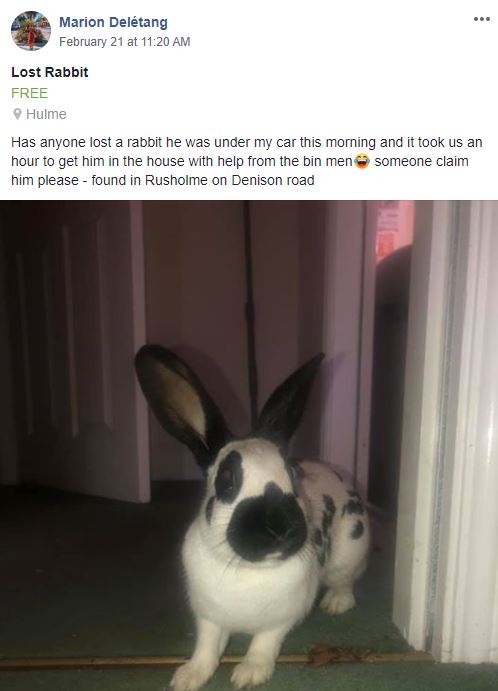 “Has anyone lost a rabbit? He was under my car this morning and it took us an hour to get him in the house with help from the bin men. Someone claim him please – found in Rusholme on Denison road,” she later wrote.

While loads of people loved seeing Phil the rabbit pop up on their streams, no one claimed him. Faced with this silence, the housemates took him to the vet and found out he wasn’t microchipped.

Phil the rabbit was rescued from under a car in Rusholme this week! He's now been taken to a lovely new home <3 pic.twitter.com/gk7Dt1e3S5

“The vets scanned and found no chip and no one claimed him after posting all over social media and putting notices through doors,” she told The Manchester Tab.

As to what Phil is doing now? Anya said: “Phil has gone to live with my friend’s parents and their other house rabbit.”

Sounds far better than under a car!

• UoM student asked Calvin Harris if she could pin his d*ckpic to her fridge, and he replied