In a post, Emma Jean claimed a bouncer kicked her and another girl out of the club for kissing, saying: "That's not okay here."

The bar has since released a statement saying the couple were "engaging in sexual activity" and claims the pair "began behaving aggressively towards staff," who tried to resolve the situation peacefully until Emma and the other girl left "of their own accord." 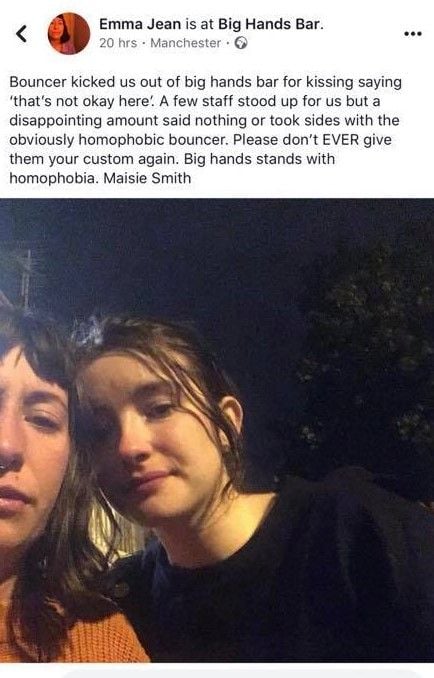 FSG members have been divided over Emma's claims, with some calling for a boycott, while others rushed to defend the bar. One comment read: "Half of their staff are LGBTQ."

A post by UoM student Hannah urging members to boycott Big Hands has over 400 reactions.

Another commented: "We're literally running a Pride event there next week with all LGBTQ DJs.

"Me and my girlfriend who works there are in there pretty much every day. Never been an issue. We know limits of PDA in a bar like everyone else should.

"CCTV footage of the real event exists but can't be shared until the girls reply as it's an invasion of privacy."

The Manchester Tab asked to see the CCTV footage, but was told it could not be sent, as it would compromise the privacy of the other people in the bar.

"A few staff stood up for us but a disappointing amount said nothing or took sides with the obviously homophobic bouncer.

"Please don't Ever give them your custom again. Big hands stands with Homophobia."

The Manchester Tab approached Emma for comment, but received no reply.

"They were informed that their actions, regardless of personal identity, was not in line with what we deem to be appropriate for a public space. They were not asked to leave.

"In response to this the individuals involved began behaving aggressively towards our staff. We made attempts to resolve the situation peacefully, but to no avail.

"The individuals then left the premises of their own accord half an hour later. Again, they were not asked to leave.

"We have since reached out to the individuals in an attempt to create a face to face dialogue, but unfortunately so far we have been refused and falsely accused of being homophobic.

"Big Hands is a long time supporter and employer of members of the LGBTQ community and anyone who knows us will know that we never condone homophobia or discrimination in any form.

"We regret that this situation has escalated to this level and we are actively trying to resolve this misunderstanding."

Have you encountered homophobia in a Manchester bar? DM your stories to The Manchester Tab Instagram.