Two of 23 votes were passed

The University of Manchester Students' Union has postponed a vote on supporting December 5th's MisogynyISHate rally until their next Senate meeting on December 6th.

A policy proposal for the SU to endorse the campaign for Greater Manchester Police to treat misogyny as a hate crime was due to be voted on, but as the Senate meeting ran late, all but two policy proposals were postponed until next month's meeting. 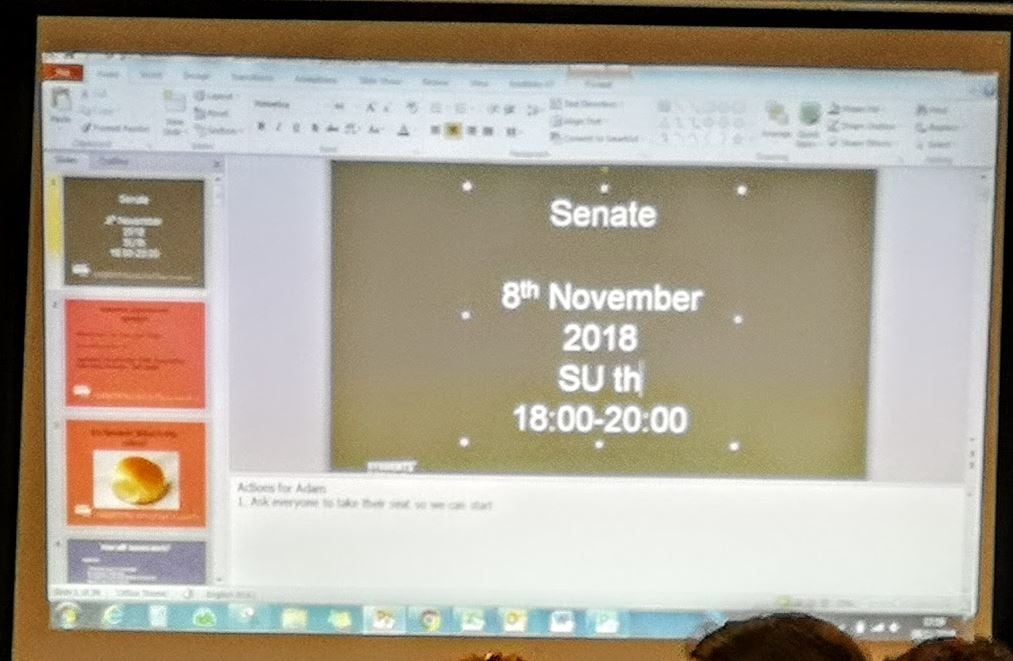 When the postponement was announced, Safiyya El Diwany, part-time Women's Officer and Femisist Collective Chair, asked if the proposal to endorse MisogynyISHate could be prioritised as it would be redundant by the time of the next meeting.

Senate Chair Adam Rogers replied that Senate bye-laws prevented the meeting being extended past 8pm, and whilst he had already extended it for "15 minutes or so", he could not extend it any further.

However, Senate bye-law 96 states that meetings can be extended by procedural motion, a process that can be started immediately by any member present.

The MisogynyIsHate campaign told The Manchester Tab: "The MisogynyISHate Campaign are incredibly disappointed with the outcome at the Senate last night. It is frustrating that so much time was wasted due to inefficient running, unnecessary bureaucratic processes and preventable delays, which led to our motion not being put forward for a vote.

"We also believe we were not given enough support when the issue of our time-sensitive motion was raised – We were told the motions not put forward today would be prioritised next senate. Obviously this is redundant as next senate will be taking place after the MisogynyISHate rally.

"We were not given any instructions or guidance as to how we could raise this motion through other channels. We feel let down as a lot of time was spent preparing for the motion proposal, as well as attending the meeting itself.

"The motion is incredibly important as the SU should be taking a lead in making Manchester safer for self-identifying women."

Thursday's meeting began over fifteen minutes late, and was further delayed by an online voting system failure, which forced elections to fourteen officer and committee positions to also be postponed.

This meant that two of the 23 votes on the agenda took place. A policy that proposed to "revoke the clapping ban" failed with 47 per cent support.

The University of Manchetsr Students' Union told The Tab Manchester in a statement "We are confident that Senate was run in accordance with our bye-laws and fully back the decision of the Chair to end the meeting after the 2 hour deadline.

"It was a challenging session to run due to a much higher than expected turnout for the part-time officer elections, a turnout that was very encouraging for our democratic engagement but consequentially took up a lot more time than usual to hear the candidates' statements.

"We do not regret giving this time to students who had the courage to stand for election.

"We have a staff team and eight executive officers working year-round to support a huge variety of student campaigns. Passing a policy through Senate is not the only avenue of receiving support from the Students’ Union. We continue to extend the invitation to the MisogynyISHate campaigners to meet with staff and/or officers at the SU so we can continue empowering the campaign with resources and expertise. The rally on 5th December is booked in to take place in Academy 2 in the Students’ Union building, we are supporting the campaign and this particular event completely.

"To judge the Students’ Union’s support of a campaign as ‘disappointing’ based on one unusual Senate meeting in isolation is unfair.

"The Union has backed the MisogynyIsHate campaign since it was brought to its attention in July – providing financial and non-financial support in a number of ways. The support of this specific campaign is in addition to a constant breadth of work undertaken by the Union to improve the position of women. To suggest that the Students’ Union takes a back seat in making Manchester safer for self-identifying women is an upsetting attack on the hard work the Union continues to do in this area."

"The Union works on a number of campaigns that address women's issues such as gender violence, through the ‘16 Days of Activism’ Campaign and women's right to be safe on the streets via its annual and incredibly successful ‘Reclaim The Night’ activity.

"Its other activity includes providing women with free legal advice, funding a position in local organisation Manchester Rape Crisis, championing intersectional feminism through a wide range of reading material available to students for free in its Liberation Library as well as advice and support available through the Union’s advice centre, including free attack alarms and sanitary supplies to tackle women’s period inequality.

"As a member of the International Women's Day steering group with Manchester City Council, our Women’s Officer meets once a month to plan events for IWD and discuss how to work more with local women's groups and charities. The Union also has a very good relationship with the nearby Pankhurst Centre, helping them raise funds and promote campaigns, including its recent 'plant a seed for gender equality’ to transform their garden into a sanctuary for women and children who are fleeing abuse.

"We have also worked with a number of local women's charities including SmartWomen, which gives interview and application advice to women in the workplace, by offering them space to promote their activities within our Union.

"The ‘Speak Up Stand Up’ project is a joint initiative between the University of Manchester and the Students’ Union which tackles discrimination and harassment through initiatives like the ‘Active Bystander’ and ‘We Get It’ campaigns.

"We are incredibly proud of the work we do to champion women's rights."