One of his campaign pledges is better mental health care

In the series of messages Rahman called another member of the chat a "silly bitch" and a "dumb bitch", whilst bragging that he would not even receive a "slap on the wrist" for the language.

Screenshots of the current UCLU Student Trustee sending abusive messages in a WhatsApp group chat have been obtained by The Tab UCL. The identities of the other members of the chat are not known. 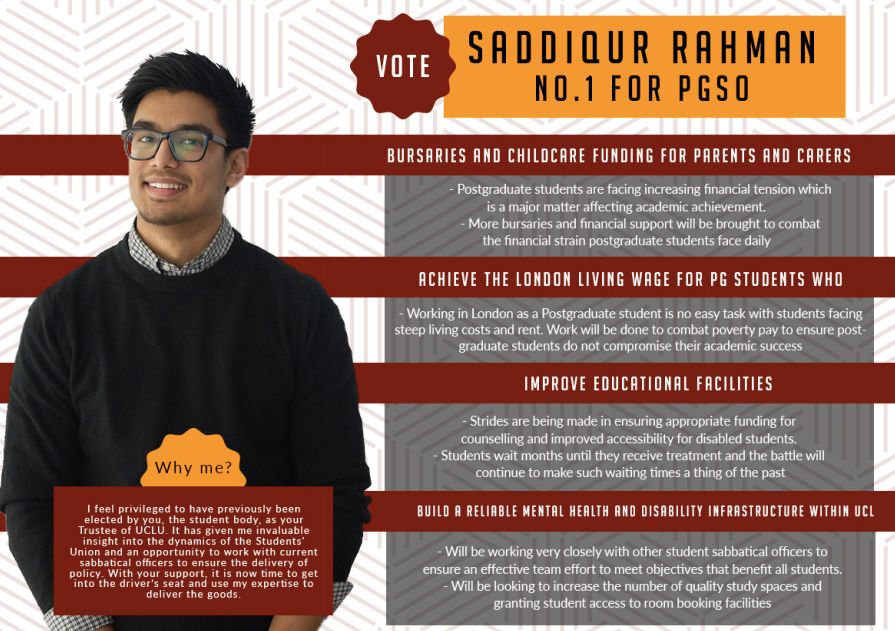 The exchange began after that chat member questioned his intentions for running for PSO, a position with a salary of £25,000, when she alleged Rahman had not been to a single student rep meeting.

Rahman replied by saying he did not need to go to meetings to get things done and then asked "why are you talking? You psycho bitch."

UCL records show he has attended meetings as a trustee, although his reply appears to contradict that. 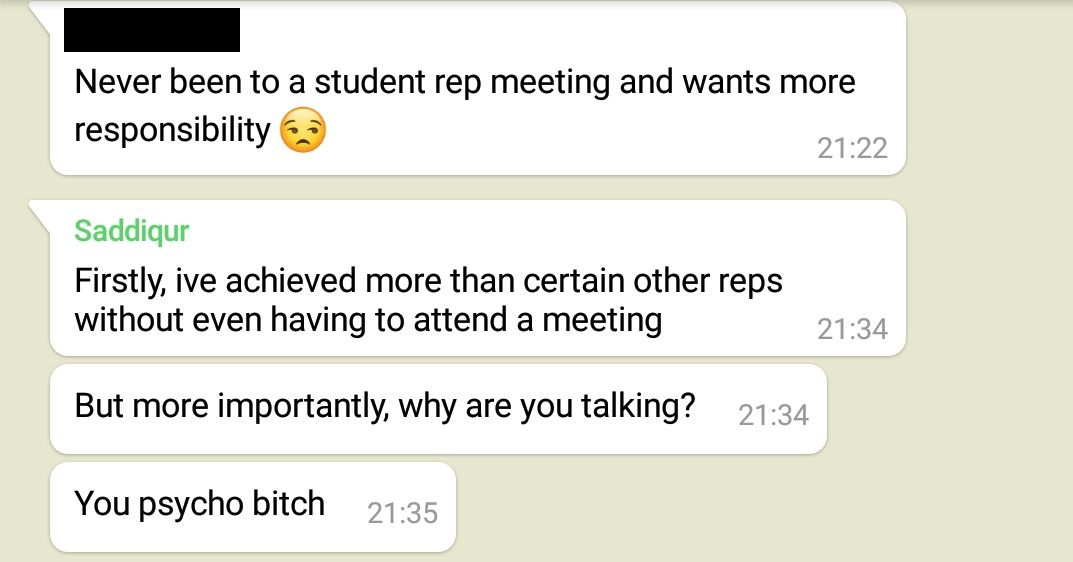 The argument then continued with the chat member saying that she was not going to "lower down to your level" and urged Rahman to take the elections seriosuly and not just to use it on his CV.

Rahman shot back that: "411 people in UCL voted to make me a director of UCLU I bet more people to state how much of a silly spoilt gold digging brat you are". This UCLU record shows Rahman was elected with 391 votes. 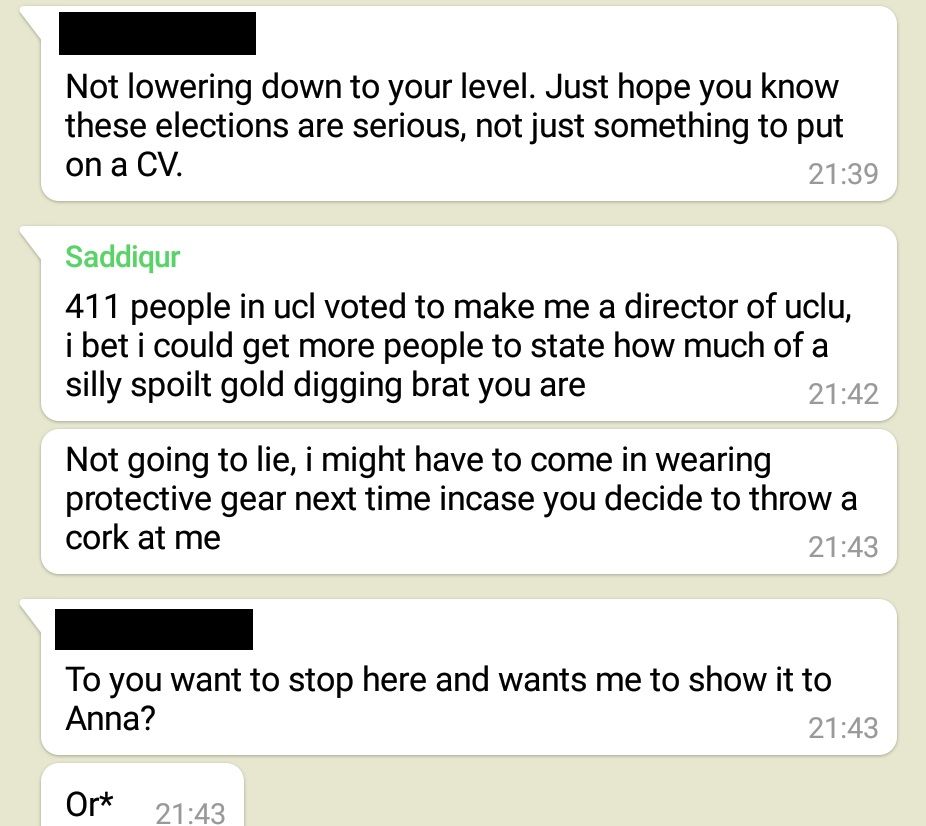 Rahman is trustee of UCLU which means he is responsible for helping the Union cary out it's financial and political aims.

The argument continues to get more heated, as she replies with a warning warning that she was going to report Rahman to which he replied: "Go for it you silly bitch".

Saddiqur then tells her to "just keep it zipped you dumb bitch" and then apologises to the group who have just had to "witness my language."

Rahman defends his actions by "I've only showed respect to her up until now since shes decide to, once again, publicly denounce me". 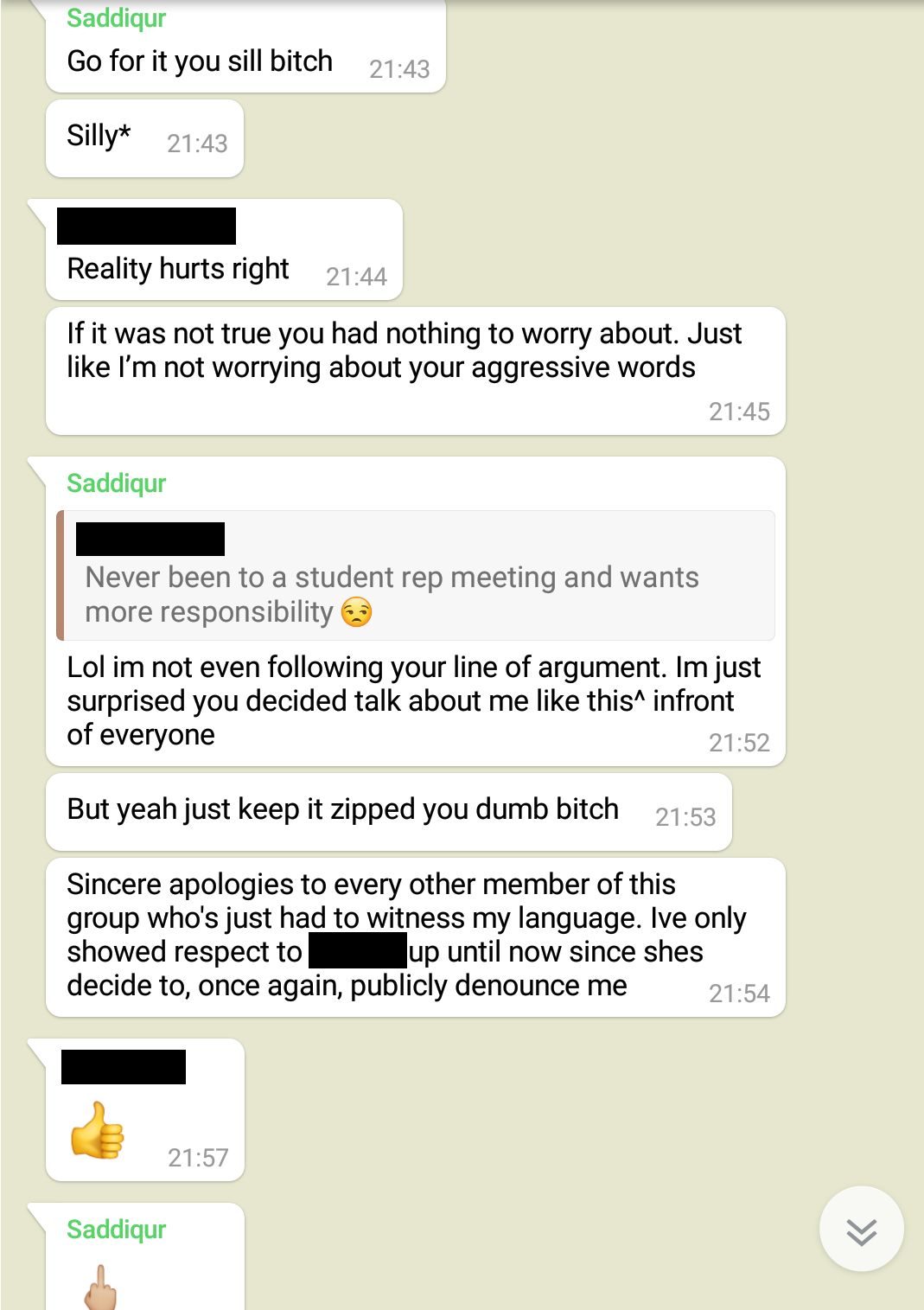 She then responds an hour later saying she is not going to report Rahman because he is a "waste of time."

Rahman's response to this has been delated but from the conversation it is implied that it was abusive in nature, as she replies: "Enough."

However, this does not stop Rahman who goes on to tell her: "Please do take it to Anna. Anna wont even slap me on the wrist for calling you a bitch. Just know I mean everything else I said."

The conversation ends with her stating: "I'm crying so much, you have no idea." 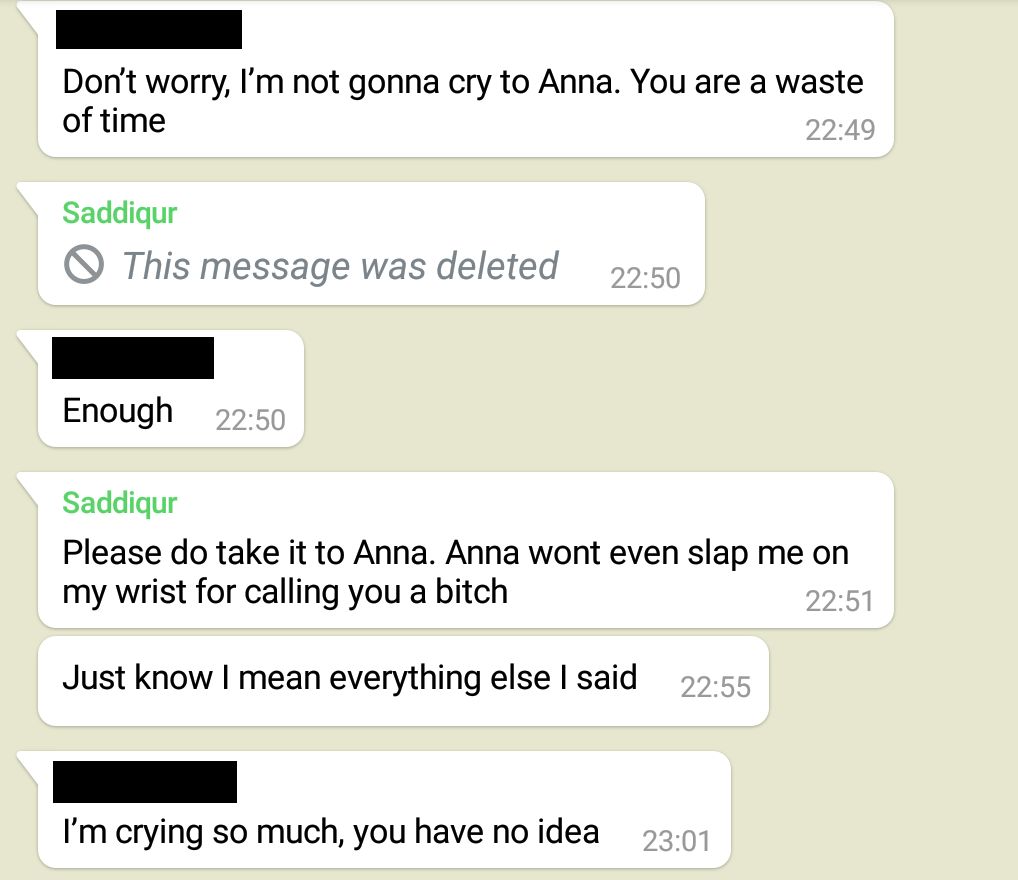 Speaking to The Tab UCL, Rahman said: "The person who I was replying to has repeatedly been abusive towards me both verbally and physically in the past and there are witnesses to this. This culminated in my offensive response to another episode of her abuse and I have accepted that I should have risen above it. I have also taken my grievances to multiple members of staff who have addressed this in the past.

"I had apologised at the time to the individual and would like to do so again to anybody offended by my behaviour. After being abused once again, I acted out of character without thinking."